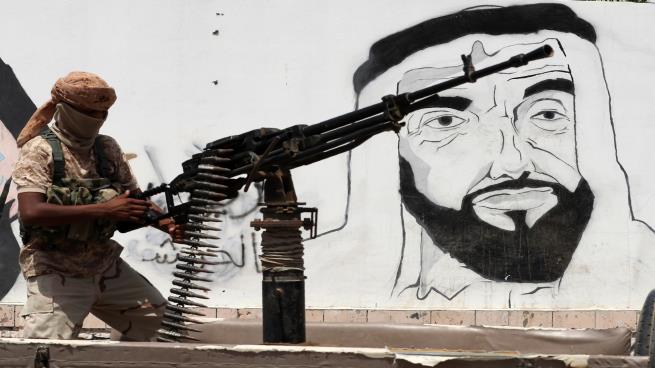 The international criticism of the UAE-Saudi alliance involvement in transferring imported weapons to al-Qaeda and armed militia has escalated as well as accuses of war crimes.

Members of the US House of Representatives asked the White House to investigate how the US weapons could reach al Qaeda in Yemen through the UAE and Saudi Arabia.

Members of the House Foreign Affairs Committee called on President Donald Trump, Foreign Secretary Mike Pompeo and Acting Defense Minister Patrick Michael Shanahan to explain how US military equipment sold to the UAE and Saudi Arabia has been transferred to al Qaeda in Yemen.

They expressed deep concern over reports accusing Saudi Arabia and the UAE of transferring these weapons to extremist groups.

According to bilateral agreements to sell these weapons to Saudi Arabia and the UAE, the two countries are prohibited from transferring such weapons to a third party.

The situation is even worse the third party is a “terrorist party” according to the American classification, and even American forces have been carrying out attacks against these groups in Yemen.

If Congress confirms that the government or the Pentagon is not doing the necessary work to complete the requested investigation, it will have to open its own investigation to highlight the elements of this issue.

The American CNN revealed in an investigation that large numbers of US armored vehicles are in areas under the control of the Huthis and other areas controlled by al-Qaeda in Yemen.

The investigation pointed out that Saudi Arabia and the UAE used American weapons to buy the loyalty of militias or Yemeni tribes.

The investigation added that an official in the US Department of Defense requested an investigation into the leaking of US weapons by the UAE and Saudi Arabia in Yemen.

Meanwhile, the German government has reported that it has information about the misuse of German weapons by Saudi Arabia and the UAE and that the two countries are not committed to the final destination of German weapons after they are received.

German government spokeswoman Ulrich Demmer said a news conference in Berlin that Chancellor Angela Merkel’s government would take a serious position to the abuse of German weapons and will follow up on its repercussions.

A German investigative team was known as the German Armes Team, which includes well-established German media organizations, published an investigation proving the use of German weapons by the Saudi-UAE alliance in the Yemen War.

The team analyzed videos and satellite images that geographically identified the location of a number of German-made armament systems in Yemen.

The investigation team has carefully identified locations for many UAE military vehicles in Aden and near Al khawkhah .

The German government confirmed last week that it will not hand over any weapons to Saudi Arabia and the UAE “at the moment” and that it will take its future decisions in this regard based on developments in the conflict in Yemen.

The German government also said in November it would reject any licenses for future arms exports to Saudi Arabia over the killing of Saudi journalist Jamal Khashoggi.

Amnesty International previously said that one of the Belgian machine guns, known to have been used by a Yemeni militia in the Hodeidah attack, was among the weapons displayed at one of the largest arms exhibitions in the Middle East in Abu Dhabi.

According to the promotional material for the IDEX-2019, which was held in the United Arab Emirates, a Minimi submachine gun was among the thousands of weapons available for sale.

FN Herstal manufactured this weapon in the province of Wallonia, Belgium; it is among a group of weapons handed over by the Belgian Walloon authorities to the Saudi-UAE-led coalition in recent years for use in Yemen’s armed conflict.

An Amnesty International investigation last week documented the use of the same type of weapon by the Giants brigades, a Yemeni militia supported and armed by the United Arab Emirates, but not accountable to any government.

Patrick Wilkin, a researcher at Amnesty International’s Arms Control and Human Rights Program, said: “It is surprising that FN Herstal delivered the Minimi machine guns to the UAE after we revealed how the UAE nationals gave this weapon illegally to Unaccountable militias in Yemen.”

“The Belgian authorities and FNH Herstal should not sell more arms to any forces fighting in Yemen, especially the United Arab Emirates—the same country that leaks weapons recklessly to the fighting forces, some of whom commit war crimes in Yemen,” he said.

“We are keen to see the results of this investigation soon,” Philippe Hinsmanns, director of the Belgian branch of Amnesty International, said in French. “We hope that this will lead to policy changes that make Wallonia consistent with its international obligations. Under the ATT, and the EU’s common position on arms exports, Belgium has legal obligations not to transfer arms to coalition forces fighting in Yemen.”

According to publicly available data, since the outbreak of the conflict in Yemen in March 2015, Western and other countries have provided the UAE with at least 3.5$ billion worth of weapons. This includes heavy conventional weapons, aircraft and ships, light arms, light weapons and spare parts, and associated ammunition.

The International Organization noted that under the Arms Trade Treaty and the EU’s common position on arms exports, Belgium has legal obligations not to transfer weapons to the coalition forces fighting in Yemen. Any State that does so demonstrates that the funds are stronger than its declared commitment to international law.

According to the organization, although the UAE and the militias it supports are involved in war crimes and other serious violations, the following countries have recently supplied arms to the UAE: Australia, Belgium, Brazil, Bulgaria, the Czech Republic, France, Finland, Germany, South Africa, South Korea, Turkey, the United Kingdom and the United States, among others.

The manufacturers of weapons and defensive weapons from all the above countries are displaying their goods at IDEX 2019.

The recent Amnesty International investigation documented some of these weapons in the hands of the “Giants brigades” and other unaccountable combat forces in Yemen, including the “Security Belt” and “Elite Forces.” These groups are a disaster for Yemeni civilians, thousands of whom have already been killed, while millions more are on the verge of famine as a direct result of the war.

“The ongoing massacre of civilians in Yemen, including by the Saudi-led coalition, the United Arab Emirates and the militias backed by it, should make all countries seriously stop supplying these weapons,” concluded Patrick Wilkin.

Amnesty International’s campaign has called on its supporters around the world to demand that all states halt the flow of weapons that fuel war crimes and gross human rights violations in Yemen.

Amnesty International: lack of freedom for civil society in the UAE