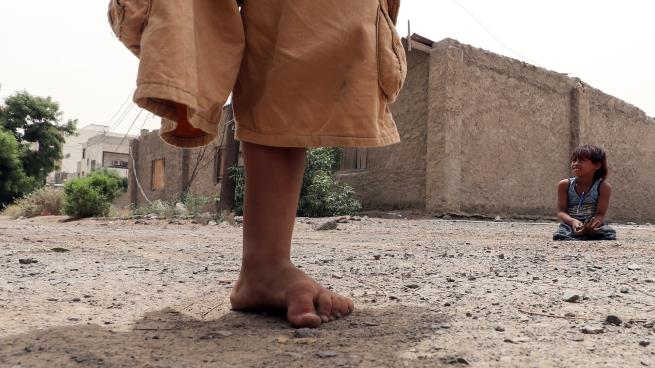 Protests continued in Aden, the Yemeni capital, for the fifth day in a row condemning killing a key witness in a rape case committed by security forces supervised by the UAE forces. Chaos also prevailed in Bir Ahmed prison, supervised by Emirati officers, because of the abuses and violations held against detainees.

Dozens of demonstrators marched peacefully through the streets of the Mualla district in Aden province, demanding to hold accountable those involved in the murder of a witness of rap by a pro-Abu Dhabi force of a seven-year-old boy, while the streets remained closed since Sunday.

The participants in the march demanded respecting human rights, unifying the security services and the integrating the armed groups with the official bodies, while dozens of protesters closed the main streets in Mansoura and Khor Maksar.

The committee, which was formed by Deputy Prime Minister and Minister of Interior Ahmed al-Misri, investigates the circumstances of the escalating issue in the Yemeni street. The minister avoided disclosing the parties seeking to intervene in the security situation, he said.

Al-Masri said that his ministry does not control the security scene alone and that the relationship between the Yemeni government and the Saudi-UAE alliance is flawed and must be reformed.

In Bir Ahmed person in Aden, which is supervised by Emirati officers through the security belt forces, chaos broke out after the security forces stormed the dormitory in an attempt to build concrete walls to ensure control and distribution of detainees.

Yemeni writer and political analyst Yasin al-Tamimi said that the Yemeni Interior Ministry’s commission to investigate the killing of the UAE-backed counterterrorism forces the witness in the rape case is a “trap” that has been developed to “dilute” such important issues.

He added that al-Misri is covering the UAE crimes and wants to give a negative impression that there is a gap between the Interior Ministry and the security services operating outside the legitimate authority in Aden.

Al-Tamimi said it was important for the Ministry of the Interior to arrest those involved in all UAE crimes before forming an inquiry commission. He stressed that the Saudi-UAE alliance, especially Abu Dhabi, contributed to the creation of a security vacuum for the legitimate government, where the UAE deliberately razed the presence of the legitimate authorities in the southern provinces, including Aden.

Al-Tamimi holds the Yemeni legitimate government accountable for the current events in Aden, pointing out that it has left its constitutional rights for more than four years. He predicted that the UAE would escalate its crude practices and violations against Yemenis to achieve its objectives at the lowest possible cost through “the booty of society.”

The Yemeni researcher and political analyst Al-Bara Sheiban said that the UAE-backed forces in Aden have taken the word “counter-terrorism” as a pretext to carry out all human rights violations against Yemenis, including the construction of secret prisons and the humiliation of detainees with all kinds of systematic torture.

Shiban said the Huthis group had taken the same pretext when it invaded the Yemeni capital of Sanaa and wanted to be a better example of fighting terrorism, but it caused chaos in the country.

Shaiban pointed out that the UAE forces do not have any legal mandate of the Ministry of the Interior, stressing that these forces do what they want to make sure that they will not be held accountable for those behaviors and practices.

He appealed to the legitimate Yemeni government to expedite the resolution of the problem of the existence of armed factions not subject to it, taking advantage of the popular momentum in the Yemeni street.

In the meantime, Intelligence Online website reported that the tension between Abu Dhabi and Riyadh in the Yemeni city of Aden increased due to the UAE refusal to support the Yemeni President Abed Rabbo Mansour Hadi, although he is supported by Saudi Arabia.

Hadi, 73, wants to take control of the port of Aden, which is now occupied by militias under the administration of the Crown Prince of the UAE, Sheikh Mohammed bin Zayed, who says that Hadi allied with the Yemeni Al-Islah political party of the Muslim Brotherhood.

It is noteworthy that the Al-Islah is concentrated in the region of Taiz, central Yemen, and Riyadh does not share Abu Dhabi concern, and continues to support Hadi in the absence of a better alternative.

The UAE established in 2016 a security and military force called “the security belt” operating in the south of the country and includes a diverse group of Yemeni officers and soldiers and activists of the southern movement and some of the members of the “Salafist” to serve their agenda in Yemen.

The belt forces and so-called “elite forces” in Hadramout province established secret prisons run by the UAE to arrest opponents of the UAE presence in southern Yemen.

Human Rights Watch has published information and testimonies about these detention centers in Aden and other parts of southern Yemen.

In June Amnesty International demanded an international and urgent investigation into the role of the UAE in establishing torture networks in southern Yemen, while the US State Department confirmed that it had seen reports related to secret prisons in Yemen.

The Associated Press reported that an investigation conducted documented incidents of the disappearance of hundreds of people in these secret prisons, after being arbitrarily arrested as part of the pursuit of members of al-Qaeda. According to the information provided by the Agency, these prisons were witnessing cases of brutal torture to the point of “roasting” the prisoner on fire.