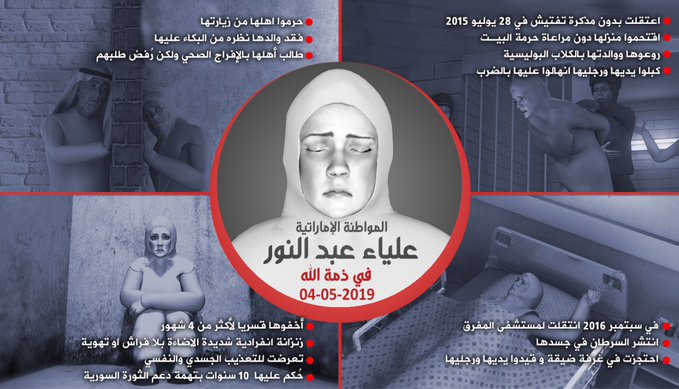 UAE citizen Alia Abdel Nour, who died a week ago in prison, has become a symbol of human rights violations in the UAE, while her case summarizes the system of tampering and arrogance that affects human rights in the country.

There is no doubt that Alia’s death in prison proved that the alleged year of tolerance proclaimed by the UAE is just another propaganda aimed at polishing the policies of the state submerged in repression.

Alia’s case was a tragedy that clearly illustrates the current human rights situation in the UAE, as she is not the only woman arrested, forcibly disappeared and subsequently tortured in the UAE.

The UAE’s ruling regime continues to impose arbitrary restrictions on the right to freedom of expression in the state and uses criminal defamation and anti-terrorism laws to detain, prosecute and abuse its critics, while state prisons have witnessed and continue to be subjected to torture and degrading treatment.

In July 2015, the UAE state security service, Alia Abdel Nour, was arrested from her home after being hidden for many months before a written letter leaked out recounting some of the violation against her.

Rights activists confirmed that Alia, who returned to cancer after she was cured 10 years ago, died under slow torture.

The United Nations called on the UAE regime to immediately and urgently release Alia, while international human rights organizations confirmed that she was deliberately neglected.

Alia Abdel Nour was convicted in 2017 on charges of supporting al-Qaeda for 10 years, while rights groups confirmed her trial was unfair and that the case was marred by torture and serious violations of due process.

In the case of Alia, the UAE regime violated international law, which provides the conditional release of patients for medical examinations and treatment and it is binding on the prison authorities and may reach to full release if the prisoner health requires.

The law also allows prisoners’ families to visit them frequently if their illness is confirmed, but in the case of Alia, nothing of which happened.

What remains for the family of Alia are recordings of previous phone calls with her attest to the oppression and disability she complained of long from inside Al Wathba prison in Abu Dhabi before she dies.

Rising demands in Europe to ban weapons sale to UAE