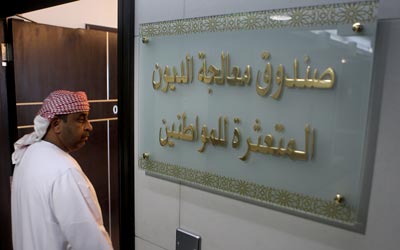 The financial pressures are besetting UAE citizens and expatriates amid high rates of borrowing, which reflects a severe economic crisis the ruling regime ignores and avoids putting any future solutions to which.

This comes at a time when the ruling regime in the UAE continues to support its conspiracies and inflame external conflicts such as the war in Yemen and interference in countries such as Libya, Egypt and the Horn of Africa.

This is part of the conspiracies of the ruling regime in the UAE to expand and gain fake influence instead of solving the financial problems of the citizens and addressing the economic crisis that threatens the state.

In a sign to the financial pressures of UAE citizens, the Debt Settlement Fund has announced that 3,310 debtors have been exempted from their debts with a total value of 361 AED million, with the need to find radical solutions to citizens’ crises and cost of living.

The Director-General of the Abu Dhabi Crown Prince’s Court, Mr. Jaber Ghanim Al-Suwaidi, reminded the public that it is a year of tolerance and that the initiative affirms the “keenness” to ensure the citizens a decent life and their interest in enhancing their family stability.

But the number mentioned is very large amid ignoring to answer the question whether these citizens are defaulters, and how many of them are so?! Most of these are responsible for Emirati families living in poor condition because of the loans that are being made to meet the cost of living in the country and to secure their future and their children.

The main task of the Fund is to study and remedy the loans of the defaulters and to make adjustments to their personal loans in coordination with the Central Bank and the creditor banks in the State.

In 2012, the Fund said that the number of beneficiaries is 354 citizens. Those who were exempted are 3310, that means that there are about three thousand citizens who have suffered a setback.

In 2015, the former chairman of the Supreme Committee of the Debt Settlement Fund, Ahmed Juma al-Zaabi, said that “the Fund achieved its objectives to resolve the bulk of the troubled issues of citizens, and contributed to the stability of them and reflected positively on the living conditions of their families!” The huge difference in the number shows that no treatment has been done, but that the “borrowing” and “debt stumbling” crisis has become worse.

Because of financial pressures, UAE citizens and residents are forced to borrow. A study published in mid-2018 by Emirates NBD shows that 94% of the UAE’s population is under financial pressure and that around 55% of UAE residents have credit card loans.

The study found that 69% of the population had no financial plans to support their retirement, according to a study conducted by Emirates NBD.

Instead of exemptions and rewards, the ruling regime in the UAE must find radical solutions to the reasons for Emiratis to borrow instead of continuing to focus on conspiracies fueling external conflict and obsession with military spending.

Analysis: The UAE’s use of media contradicts with reality