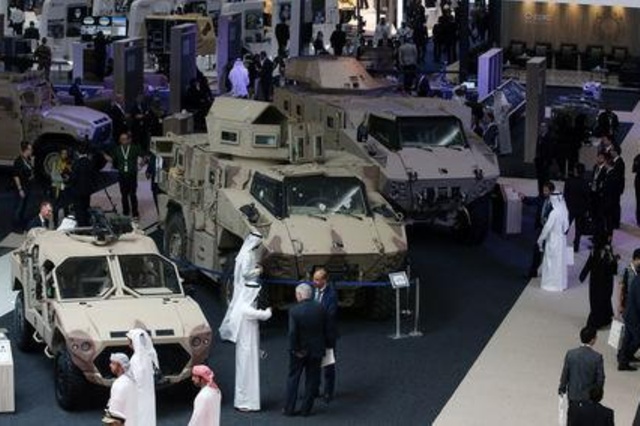 Despite four years of economic crises in the UAE, the country’s spending on arms deals is increasing. The value of deals signed by the UAE at the IDEX 2019 arms auction in five days is 5.45$ billion.

The UAE’s continuing “insatiate” in the arms race raises questions about why the UAE is making all these military deals! – To fuel foreign conflicts.

In light of the absence of the Federal National Council from its role in investigating the ways in which these billions of the state budget are spent and the uses of these weapons. International reports and organizations revealed that most of these weapons are not used by Emiratis, but militias in Yemen and Libya which commit war crimes against humanity.

The Guardian criticized the exhibition “IDEX Abu Dhabi” of arms, where British companies participated also, noting that weapons were exposed can be used in acts of “brutality” similar to the war in Yemen.

Last week, CNN revealed that weapons supplied by Washington to Saudi Arabia and the UAE for war in Yemen ended up in the hands of militias, such as al Qaeda and the Iranian-backed, Houthis.

A report by the United Nations Committee of Experts said that Abu Dhabi continues to violate the arms embargo imposed on Libya and provides military support to the commander of the Karama militias, Khalifa Haftar. The Russian military expert, Yuri Lamin, said the Russian-made “Kornet-E” stand on the “Cougar,” a military vehicle, was manufactured by the Emirati-Canadian company “Streit Group.”

Lamin explained that the anti-tank Russian system, “Kornet-E,” which was purchased by the Libyan authorities under Colonel Muammar Gaddafi. However, Foreign experts have monitored its use by the warring parties in the Libyan war since 2011.

The Russian expert said Haftar’s forces were receiving military support, including light armor, from Egypt and the UAE.

According to a January 2018 report by the Market Research Foundation, the country’s average defense expenditure between 2013 and 2017 is 23.4$ billion a year. The same foundation predicted that it would rise to 35$ billion between 2018 and 2022.

Between 2013 and 2017, the UAE has significantly increased defense spending, making it one of the most attractive markets for foreign arms companies.

The report adds that many of the deals signed with foreign Original Equipment Manufacturers (OEM) in UAE’s biennial international defense exhibitions prove the attractiveness of its defense market.

Since 2015, the UAE has been facing economic problems as oil prices have deteriorated. The federal and local budgets deficit and tourism decline in the country have continued despite the incentives provided by the country.

With the collapse of property values in the state, the UAE is approaching from a new crisis, threatening the setback of the UAE economy, which continues to try to recover from the setback of 2008.

According to the Economist magazine, the UAE’s “pink” economic figures and statistics hide worrying indicators, pointing out that the Dubai stock market index was the worst performer in the Middle East in 2018.

In addition to this weak economy and the purchase of arms, the state has been involved since the year 2015 in the war of Yemen within the “Arab alliance” led by Saudi Arabia.

The UAE spends 3.1$ billion a month on the war on Yemen. Which means, it spends more than 36$ billion a year in Yemen alone. In addition to other financial expenses to improve reputation through specialized international companies, and others accompanying the war.

The state is also spending billions of dollars in support of Khalifa Haftar in Libya, funding 17 local militias and thousands of fighters.

An Emirati military spokesman announced that the UAE Armed Forces has signed defense contracts worth 20.053 AED billion (5.45$ billion) during the current week, 35% of which with national companies and 65% with foreign investors, which were distributed as follows:

Day one: The UAE announced that it has signed military deals worth around 5 billion dirhams (1.3$ billion), with 15 international companies and 18 local companies.

The contracts were signed with the US company, Raytheon, to purchase upgraded Patriot missiles for Air Force and Air Defense, and the Russian, Joint Stock, for maintenance and purchasing spare parts for the Bantzer air defense system for two years, as well as the purchase of Kornet missiles of EM150.

The total value of deals with foreign companies on the second day of the exhibition amounted to 5.8billion dirhams, including the contract with Raytheon to buy US missile launchers for the Patriot system for the Air Force and Air Defense worth 5.730 AED billion.

Day three: The UAE signed deals worth about 5 billion dirhams, and the contracts were distributed to eight international and 20 local companies.

The contract also included an agreement with a Russian company to purchase 100 mm ammunition for land forces worth 58 million dirhams, and a contract with a French company for a 93 million dirhams worth submarine sonar and a Turkish company to supply spare parts for a general maintenance weapon of 25 AED million.

Al-Hassani said in a press conference that the contracts were distributed to seven international and 22 local companies, bringing the value of transactions concluded within four days to 19.65 billion dirhams.

Day Five: The value of the transactions for the fifth and final day of the exhibitions amounted to 402 million and 760 thousand dirhams, distributed to seven local and seven global companies.

The deal included contracting with King Abdullah Center of Jordan to purchase combat launchers and binoculars for the armed forces units, worth 14 thousand AED, and contracting with German company Rheinmetall Electronics to provide technical support services to the training department for the Directorate of Training, worth 40 million dirhams. The deal also included the contract with Lockheed Martin to provide technical support services to provide technicians for the repair and maintenance of rocket launchers “Hi-March” to lead the maintenance weapon worth 33 million and 975 dirhams.

Contracts with foreign companies on the fifth day included contracting with Joint Stock Company to purchase various munitions for the command of ground forces, which worth 129 million and 625 thousand dirhams.

Yemeni official: The UAE is conspiring against us and spreading chaos and sabotage in our country