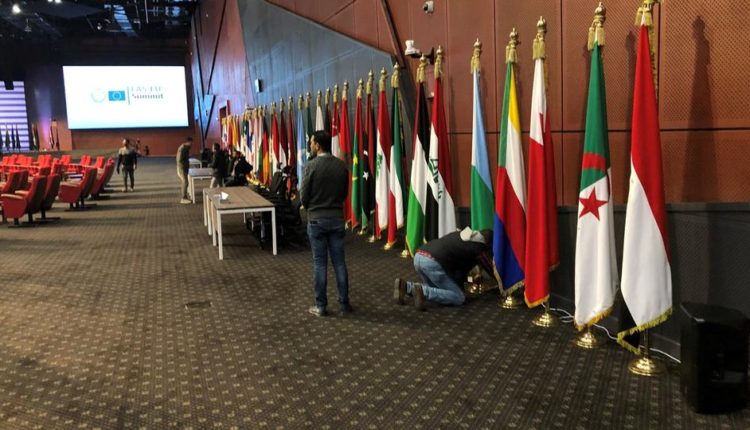 Emirates Lakes learned from reliable sources that the weak representation of the United Arab Emirates at the first Arab summit, which opened on Sunday in the Egyptian city of Sharm el-Sheikh, was on European request.

The same sources said that the European Union required the absence the Crown Prince Mohammed Salman and Crown Prince of Abu Dhabi, Mohammed bin Zayed for the Arab-European summit to ensure its success.

The sources said that the European Union objected to the participation of bin Salman and bin Zayed because of their criminal role in the war on Yemen and the accuses against them of war crimes against civilians.

The first Arab-European summit was held in Sharm El-Sheikh, Egypt, on Sunday and Monday, under the theme of “Investing in Stability”. It discussed issues related to security, migration and economic development.

The Emirati participation was limited to the governor of Fujairah, Hamad bin Mohammed al-Sharqi, a member of the Supreme Council of the State, in addition to a number of ministers, according to Al-Ittihad UAE newspaper.

The meetings of the Arab-European summit was held with a large presence of representatives of European and Arab countries, bringing together about 50 delegations from both sides.

The summit addressed many political and economic issues related to economic and social development, including the Palestinian issue and ways to achieve a comprehensive and just peace. It also discussed issues such as Syria, Libya, Yemen and the Arab, European and international efforts. In addition, the summit discussed economic and cultural cooperation between the Arab and European countries, and discuss common challenges between the two sides, such as combating terrorism, illegal immigration and human and weapons trafficking.

The summit, according to a European statement, seeks to strengthen Arab-European relations, as leaders addressed a wide range of current challenges and common opportunities, such as trade, investment, migration, climate change, and security. The summit also provides an opportunity for leaders to discuss the latest developments in the region, including the peace process in the Middle East, Yemen, Libya, and Syria.

Sunday’s session focused on strengthening the Euro-Arab partnership and addressing global challenges. In Monday’s session was under the slogan “Addressing Regional Challenges Together”

The leaders are also expected to discuss possibilities for developing cooperation in the fields of energy, science, research, technology, tourism and other fields.