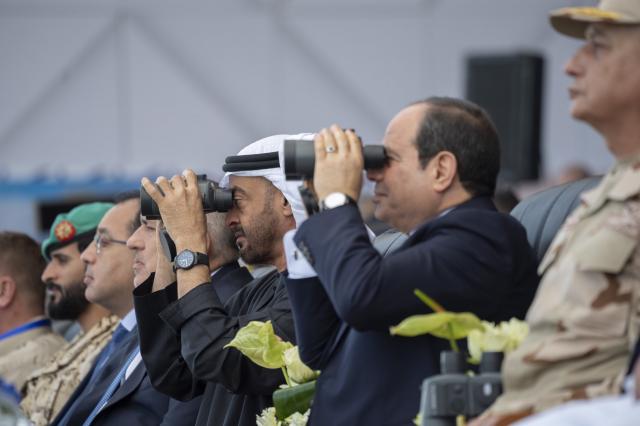 Following successive defeats that Khalifa Haftar’s militias had by the internationally recognized Government of National Accord (GNA), the United Arab Emirates’ ruling regime is working to get Egypt to intervene directly in the Libyan conflict for the benefit of Abu Dhabi’s plots.

The Emirati regime has promised the Egyptian regime, led by President Abdel Fattah el-Sisi, of great financial support if Cairo agrees to intervene in Libya with its army to save Haftar militias which are facing complete collapse, Emirates Leaks learned.

On the political side, the UAE hailed el-Sisi’s declaration. In a statement, the UAE Ministry of Foreign Affairs and International Cooperation affirmed, that the UAE stands with Egypt in all its measures aiming to protect its security and stability in light of the disturbing developments in Libya.

The ministry hailed Egypt’s keenness to prevent bloodshed among Libyan people, create conditions for ceasefire and start comprehensive political negotiations under the auspices of the United Nations

Tweeters close to the UAE regime, such as Hamad Al Mazrouei expressed support for Egypt in its steps regarding Libya.

Last week, the Emirati academic Abdul Khaleq Abdullah called on the Egyptian army to fight the Turkish forces in Libya.

Abdullah said in a tweet: “Tripoli has become the first Arab capital under Turkish occupation. The bet now is on a decisive Egyptian role, especially that the Egyptian army is among the 10 most powerful armies in the world, to deter Erdogan and stop the advancement of his mercenaries east, west, and south.”

He also said Egypt did not want to intervene in Libya and generally favoured a political solution, but added that “the situation now is different”.

“If some people think that they can cross the Sirte-Jufra front line, this is a red line for us,” he said before an audience that included some Libyan tribal leaders.

“If the Libyan people moved through you and asked us to intervene, this would be a signal to the world that Egypt and Libya are one country, one interest,” he added.

El-Sisi also said that Egypt might provide the tribes with training and weapons to fight the “terrorist militias”.

In the meantime UAE, Minister of State for Foreign Affairs Anwar Gargash incited Turkey for supporting the GNA, claiming that Ankara sees the Arab world today a strategic space for historical dreams. He recalled the former Secretary-General of the League of Arab, Amr Moussa, who considered Turkey as the biggest threat to the Arabs.

On his tweeter account, Gargash said that Amr Moussa’s statement that Turkey is strategic threat to the Arab world “did not come from nowhere, but a diagnoses of Ankara’s policy towards its Arab environment.”

The Emirati minister considered Moussa’s statement “important and highlights the Turkish expansion and exploitation of the weakness of the Arab regional system.”

Gargash claimed that “over the years, neighborliness, respect, and problems-free policy have strengthened economic and political ties between Turkey and the Arab region. Unfortunately, this has been replaced by an expansion program and leadership that sees the Arab world a strategic space for historical dreams, a policy far from wisdom that will implicate Ankara and its interests in the next stage.”