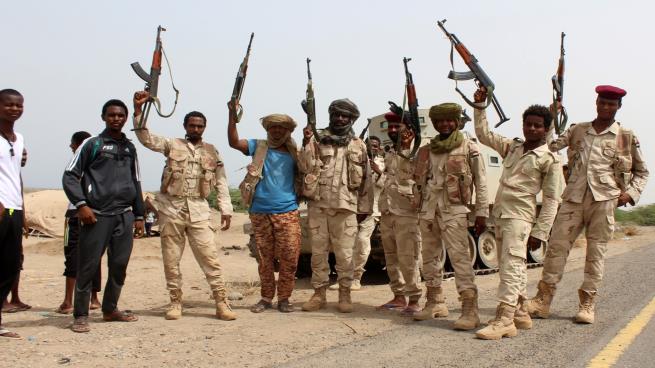 Tweeters in Sudan launched a campaign on social media against the UAE companies recruitment of Sudanese to fight in Libya and Yemen.

Thousands of Sudanese singers interacted with the (#Save the victims of the Emirati company) after revealing the use of the Sudanese as mercenaries to fight their wars and external interference.

The tweets included testimonies of Sudanese youths who were lured by Emirati companies to work on security missions and then forced to fight in Yemen and Libya.

The bloggers called for an immediate move by the Sudanese government to stop the activities of UAE companies and address the Abu Dhabi plot against the country’s youths.

Hundreds of Sudanese demonstrated in front of the UAE embassy in Khartoum, and chanted slogans condemning Abu Dhabi’s conspiracies against Sudanese youths and using them as mercenaries.

The Sudanese were shocked after the publication of documents proving the recruitment of young Sudanese to fight in Libya and Yemen, by a security company in the Emirates.

Newspapers and TV channels reported that youngsters deceived them from Khartoum by offering a job as a security guard in the United Arab Emirates offered by Black Shield Security Services in the Emirates, but after their arrival in the Emirates they were subjected to a heavy combat training for three months, and were then given the choice between going to fight in Libya or Yemen.

Within about 30 minutes, one of the young men told the story via the “Sudanese 24” channel, without mentioning his name or showing his picture, for security reasons, he said.

He stated that the story started when he and several dozen young men came to a security guard post in the Emirates, and that they passed all the tests carried out by an employment office in Khartoum, and then traveled to the Emirates to be received by the security company, after which they were transferred to the training camp in a military area near the western border of the Emirates.

He pointed out that the camp is supervised by a retired major in the Sudanese army, and that they discovered that there were seven batches of Sudanese who preceded them to the camp.

The young man added that there is a security fear and a threat inside the camp for the youth to submit a report to the UAE security authorities against any person in the camp protesting or asking about their fate, and about the mission for which they came, adding that they were prevented from making phone calls with their families or anyone else.

He explained that he had rebelled inside the camp until he was returned to Sudan, and that many young people reject the idea of ​​carrying out any task other than a security guard, according to the contract signed between them and the company.

The Sudanese citizen, Al-Tayyib, who is the father of one of the youths who are still in the Emirati camp, says that his family and all the families of the young people live in great concern because of the fate of their children, explaining that he contacted today, Saturday, with the labor office that supervised the transfer of his son to the Emirates to work as a security guard, And that the office promised him to return his son to Sudan quickly.

Al-Tayyib, who refused to give his full name, fearing his son would be harassed by the Emirates, called on the Sudanese Ministry of Foreign Affairs to intervene and end the suffering of the family and return their children, without plunging them into the wars in Yemen or Libya, noting that there are about 400 young people in the Emirati camp.

For his part, Hudhayfah Ibrahim Muhammad, the financial and administrative director of the Princess’s Recruitment Office, which is the delegated office in Khartoum for Black Shield, said that they received a letter from the company, authenticated by the Abu Dhabi Chamber of Commerce and the Sudanese embassy in Abu Dhabi, requesting the employment of Sudanese in a clear and specific job.

He explained that their office performed all legal procedures inside Sudan through the labor office, and conducted inspections for applicants, noting that the contracts signed with young people were documented by the Ministry of Human Resources and Emiratisation in the Emirates, and that the contract is not fixed in duration, and that the job and its location are clear and do not allow interpretation, i.e. Inside the Emirates. ”

He pointed out that the office and other offices have deported more than 300 of those admitted to the Emirates, including his brother and several of his relatives with reassurance.

Muhammad added that rumors about turning the mission into military and combat training in Yemen and Libya had caused them great harm and anxiety, and they tried to verify the information by contacting the Emirati company, which they promised yesterday to send a representative to Sudan to reassure the families, but he did not attend on time, and he is expected to attend today, Saturday, he says.

He pointed out that the princess’s office asked the company to issue a statement through the Sudanese embassy, ​​explaining the facts in full, stressing that the office will remain in a continuous monitoring of the situation until the truth becomes clear.

Up to now, there has been no clarification from the Sudanese government on the matter, despite receiving almost certain information that a group of conscripts has compelled to fight in Libya during the past two days.

This was not the first time that attempts were made to recruit Sudanese youth to fight in the wars of the region. In February of last year, the Sudanese security authorities arrested a group that signed an agreement with tribes loyal to the defected Libyan brigade, Khalifa Haftar, with the aim of recruiting a thousand young men Sudanese to fight in Libya.

Two members of the gang were arrested on the Sudanese-Libyan border, and were brought before a special court in Khartoum, and no verdict has been issued against them to date.