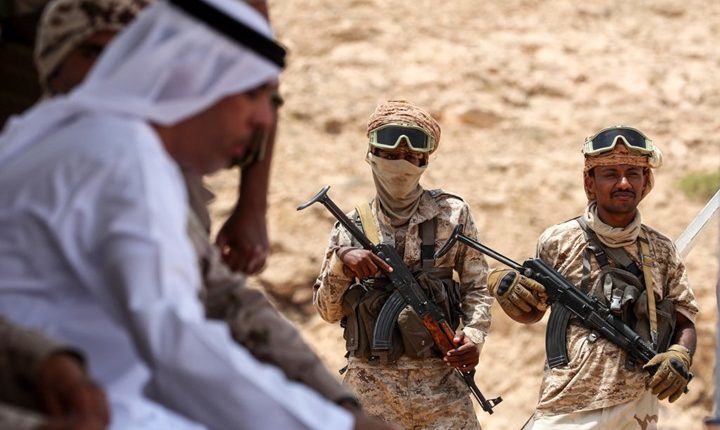 Emirates Leaks unveiled secret mechanisms of how the UAE regime funded the Al-Qaeda in Yemen to carry out criminal assassinations. A well-known economic institution such as “First Abu Dhabi Bank” is revealed to be involved.

A reliable Yemeni source said that suspicious deals coming from the First Abu Dhabi Bank find their way to Al-Qaeda operatives in Yemen.

The operation starts with depositing the funds in the accounts of Al-Qaeda branches through the global network of the largest Emirati bank. Then the money is withdrawn from the National Bank of Yemen to pay the costs of managing the Southern Transitional Council supported by the UAE.

The UAE-backed Security Belt Force is responsible for maintaining security and stability in southern Yemen with the capital, Aden.

The source, a former employee of the Compliance Department at the National Bank of Yemen, revealed that he began noticing the large transactions directed through suspicious channels and flagged them for investigation.

When the source reported these transactions, he was warned not to discuss the results, which prompted him to resign from the bank in protest.

Ever since his resignation, he had been threatened and intimidated by various pro-UAE authorities in Yemen, so he fled the country fearing for the safety of his family.

According to the source, one of the primary beneficiaries of the suspicious transactions is Aidaroos Al-Zubaidi, the former governor of Aden and was dismissed by Yemeni President Abd Rabbo Mansour Hadi in April 2017.

After his dismissal, Al-Zubaidi established the Southern Transitional Council, with the support of his deputy, Hani bin Brik, the former Minister of State, who was also dismissed by the Yemeni President and referred to investigation.

The source said that he had evidence that Al-Zubaidi and Bin Brik obtained large sums of money from First Abu Dhabi Bank through an illegal network of money exchangers and tellers and paid terrorists to carry out assassinations and cause chaos in the region.

Evidence revealed that Al-Zubaidi was using the money to directly finance an Al-Qaeda affiliate, who called him Abu Juhayman.

Abu Juhayman was responsible for the 2007 bombing of a hotel in Aden, and he has been imprisoned for three years and has worked ever since in the Southern Transitional Council and the UAE.

In 2016, Hani Bin Buraik was involved in the killing of a prominent preacher Sheikh Samhan Al-Rawi.

Reports stated that Bin Burak received orders from an Emirati commander to transfer money, weapons and a car through his brother to the assassination cell to carry out the crime.

The confessions of the killers revealed that an Emirati officer named Abu Salama met with the cell to congratulate them after the assassination of Sheikh Al-Rawi.

In addition to financing terrorism in Yemen, the source pointed to suspicious activity on accounts belonging to foreign companies (Offshore) that were funding youth institutions that promoted Islamic extremism.

Whereas, the complex structure of trust funds and external companies (Offshore) use their accounts to pay the costs of “educational programs” that have been linked to the attacks of extremists on European lands carried out by young, vulnerable and easily persuasive youth.

The source said that he had evidence of funding for institutions whose members had committed murders of innocent civilians in the name of Islam.

It has been known for a while that the UAE is involved in secretly financing terrorism in the region. However, this is the first evidence of an Emirati financial institution involvement in crimes committed on the ground as well as direct financing of extremism.

An investigation conducted by CNN had revealed that Saudi Arabia and its allies, especially the UAE, have transferred American-made weapons to Al-Qaeda and militias in Yemen.

The investigation also revealed that part of these American weapons also reached the hands of the Houthis, which would disclose sensitive details of some US military technology to Tehran, and potentially endanger the lives of US forces in other conflict areas.

CNN’s investigation pointed out that Saudi Arabia and the UAE used American weapons to buy the loyalty of Yemeni militias and tribes to influence the complex political scene, according to field leaders and analysts.

Moreover, the Associated Press unveiled, last August, that the UAE had concluded secret agreements with Al-Qaeda fighters and paid them money to leave major areas and agreed with them to join its militia.

On several occasions, officials in the legitimate government in Yemen confirmed that they have evidence of a cooperative relationship between the UAE and both al-Qaeda and ISIS terrorists.