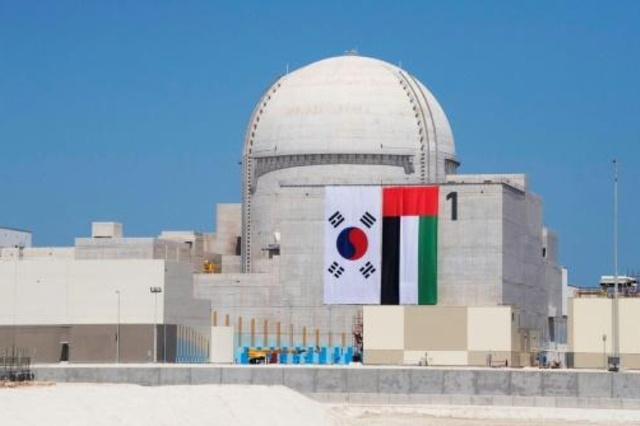 The global environmental non-governmental organization, Greenpeace, condemned the start of Unit 1 of the Barakah nuclear plant in the Al-Dhafra region in Abu Dhabi, and considered the project a drain on the countries resources.

The organization said is a statement that the project is “a wasteful investment in the wrong technology that will only deplete the scarce water resources of the Emirates.”

“Nuclear energy is not the energy of the future, and definitely not the solution. With it we are leaving our future generations with nothing but a toxic legacy of radioactive and dangerous nuclear waste.

“Countries around the world (like Germany) are opting for phasing-out nuclear energy not the other way around.

“Building a nuclear plant in a water-scarce country is just a bad and dangerous investment” in a region prone to conflicts where nuclear plants pose a great threat.

Yesterday, the International Campaign to Boycott UAE (ICBU) warned of imminent large-scale environmental risk as the UAE’s started the plant due to multiple safety problems.

The Paris-based campaign called on the International Atomic Energy Agency (IAEA) to send an urgent investigation mission to the UAE to examine the safety of the Baraka plant.

The ICBU stressed that IAEA must assume its responsibilities regarding the dangers of nuclear reactors in the UAE within its role promotion of safe and peaceful uses of atomic energy.

Nuclear safety is the responsibility of every nation that uses nuclear technology. The IAEA, through the Department of Nuclear Safety and Security, works to provide a robust, sustainable and clear global nuclear framework for safety and security to protect people, societies, and the environment.

Power Technology, specialized in energy sources, said that the project raises several concerns, especially those related to a possible leakage, given the technical problems that the establishment of the reactor included.

Experts said that the launching site of the reactor is not reassuring for such sensitive facilities.

Experts also raised questions about the real feasibility of launching the project, given that there are other cheaper alternatives such as the solar energy, nothing that most of the UAE’s land are deserts.

Power Technology points out that the Gulf is a region under many threats, pointing that the Houthis targeted the Saudi Aramco facilities in late January of this year.

Knowing that the UAE is involved the war in Yemen, it is possible that the Houthis might target the plant as a reaction to any escalation.

Moreover, KEPCO, the South Korean company carrying out the project, has been tarnished by a series of scandals. Senior officials said that the company forged documents regarding safety of previous projects it carried out.

These concerns are cited here, given that no nuclear country was spared from nuclear accidents. Several accidents happened in Japan and Iran, causing massive human and material damage, the latest of which is the Natanz facility explosions in the West of the Islamic Republic.