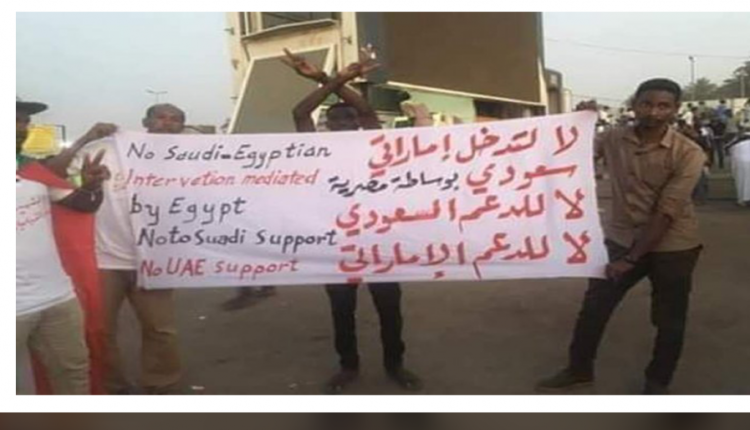 International newspapers, following the latest developments in Sudan. have warned of the impact of the United Arab Emirates subversive interventions and its attempts to impose new rulers in Khartoum.

The UAE role threatens to prevent a return to civilian rule in Sudan by providing economic support to the Transitional Military Council, which is seen by the demonstrators as part of the former regime, the Financial Times said.

In its report, entitled ‘Gulf allies shore up Sudan’s interim military rulers,’ the newspaper said that huge demonstrations on Thursday demanded the handover of the power to a civilian administration. But, material support from Saudi Arabia and the UAE, pledged by the two countries nine days after the ouster of President Omar al-Bashir, eased the pressure on the Transitional Military Council.

The two countries pledged to transfer $500 million to the Sudanese central bank to support the near-depleted foreign exchange reserves, and the two countries would send food, medicines and oil products worth $2.5 billion.

Rosalind Marsden, Britain’s former ambassador to Sudan, told the newspaper that the Gulf support for the Transitional Military Council “That support is thought to be driven primarily by the need to ensure Sudanese ground troops remain engaged in the war in Yemen — an assurance that the council was quick to provide,”

According to the report, the head of the military council, Abdul Fattah Burhan, played a key role in the deployment of Sudanese forces in Yemen in 2015.

The report pointed out that al-Bashir received money for the deployment of Sudanese forces in Yemen four years ago, at a time when the Sudanese economy has deteriorated significantly after depriving him of three-quarters of its income from oil after the secession of southern Sudan.

The report said the new Gulf aid would ease the economic crisis in Sudan, but angered the protesters, who refuse to receive foreign material support from the interim military government.

The Washington Post highlighted the slogans of the “revolution of the people,” in a sit-in in Khartoum to reject Saudi and UAE aid, and the interference of the two countries in Sudanese affairs.

The newspaper said the protests reflected rebel skepticism about the motives of Saudi Arabia and the UAE after pledging $ 3 billion in aid to the transitional military government in Sudan that ousted President Omar Hassan al-Bashir this month after 30 years in power.

The protests, which have spread throughout the country, have continued to be the biggest in recent decades, putting pressure on the military to quickly transfer power to a civilian council so elections can be held.

Protests fear that powerful royal governments in Saudi Arabia and the UAE will use their enormous wealth to suppress democracy and support counterrevolution and accuse them of doing so elsewhere in the region.

“Smooth restoration of the old regime is being organized by some of the forces of the Middle East so that it can keep its allies in power,” said Mohamed Youssef Mustafa, president of the Sudanese Professionals Association. “They are not our enemies, but they risk the anger of the Sudanese people.” The assembly, which included doctors, lawyers and others, was central to the demonstrations.

The overthrow of both al-Bashir and Algerian President Abdelaziz Bouteflika has revived the hopes of the Arab world that the democratic movement, which began in late 2010, known as the Arab Spring, may not have died completely.

Saudi Arabia and the UAE have reacted harshly to the previous wave of popular uprisings, using financial aid and military support in Egypt, Bahrain, Libya, and elsewhere to support old authoritarian allies or neoconservative dictators. It has succeeded in stifling pro-democracy campaigns in many cases.

Analysts said the UAE and Saudi had pursued a common vision for the region, aimed at countering Iranian influence, crushing Islamist political movements and stalling the spread of democracy that could raise the political aspirations of Gulf residents.

On April 11, the Sudanese army ousted Bashir from the presidency after three decades of his rule of the country; after popular protests continued since the end of last year.

The army formed a transitional military council and set a two-year term, amid attempts to reach an understanding with the opposition parties and forces over the next phase of a consensus in Sudan to reject the role of the UAE’s subversive country in its anti-Arab revolutions.

Emirati dissident reveals terrorism against his family to force him to…