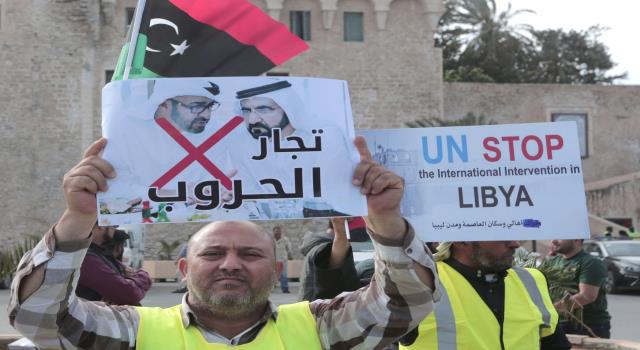 The Libyan internationally recognized Government of National Accord has downed an Emirati drone in the western city of Misrata, providing new evidence of Abu Dhabi’s criminal role in Libya.

An official government statement said the plane was one of two planes that attacked the Misrata airport and tried to target the planes and airport infrastructure in reference to the UAE’s military role in Libya.

The statement pointed out that the bombing by UAE drones by Khalifa Hifter militia forces did not result in any injuries to the structure of the Libyan Air Force.

The statement promised a “decisive response” within a very short time to Haftar’s targeting of civilian sites.

This came in a statement on the battles published on its page on the Facebook, and the operation launched by the GNA to counter the attack of the forces of retired Major General Khalifa Haftar on the capital Tripoli.

The statement said that the air strikes of the rebels and the coup, Haftar forces, made them intensify their strikes on Mitiga airports and Zuwara and Misrata randomly desperate.

More than four months after the start of its assault on Tripoli, there were numerous failures of the Haftar militia forces, and they were unable to make a real breakthrough towards the center of Tripoli.

At the end of last month, the spokesman for the operation of GNA, Mustafa al-Mujai, said that the UAE al-Kharouba base has become a legitimate target for their forces.

“We will hold all those who signed the agreement to establish the UAE base in our country to be held accountable after the end of our battle with Khalifa Haftar,” he said, stressing that their relationship with the UAE “will not be the same as before.”

The UAE armed forces are using Al-Kharouba military base, about 1,300 kilometers southeast of the capital Tripoli, to transport weapons, military experts and officers supporting Haftar in his war on Libyan cities.

Last month, the United Nations called on the parties involved in the conflict in Libya, led by the UAE, to stop the flow of arms into the country, which has been wracked by years of internal conflict.

Libya has descended into anarchy since the fall of Muammar Gaddafi in 2011. Since April, eastern Libya (the Libyan National Army) led by Khalifa Haftar has been trying to wrest control of Tripoli from forces allied to the UN-recognized GNA, but the Haftar forces attack has stalled on the outskirts of the capital.

The two warring sides in Libya are receiving military support from regional powers, most notably the UAE, which has supported militias of Khalifa Haftar with arms and money for years.

“Armed drones, armored vehicles, light trucks with heavy weapons, machine guns, recoilless rifles, mortars and rocket launchers have recently been transported to Libya with the complicity and in fact explicit support of foreign governments,” Salameh said, referring to the UAE.

Recently, the internationally recognized GNA announced its intention to sue the UAE for its support of subversive and criminal militias in the country to serve its ambitions and conspiracies to spread chaos and sabotage.

The government revealed the preparation of a legal expert group a criminal file; in preparation for the filing of lawsuits in international courts against the UAE, because of its support to Haftar’s forces.

The UAE is involved in a subversive and aggressive role in Libya, turning the country into a proxy war zone with two regional adversaries.

Moreover, the UAE is seeking to push Libya into chaos and instability to serve its conspiratorial plans to plunder the country’s wealth and resources.

Despite a UN embargo, weapons are still flowing into Libya’s two rival camps due to an attack by UAE-backed Marshal Khalifa Haftar.