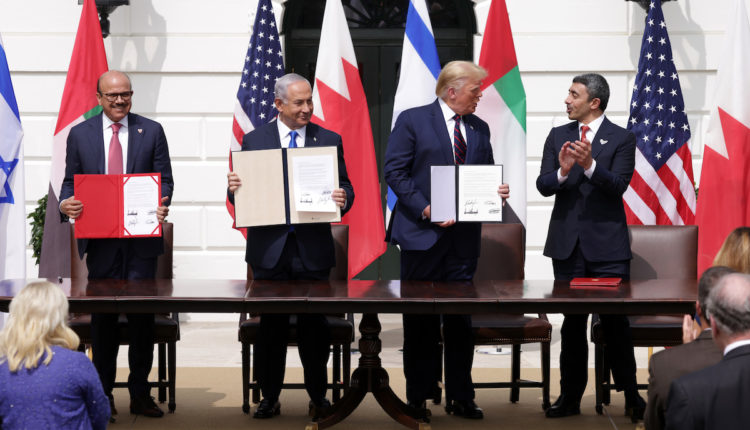 On Sep 28, 2020
At the dawn of the era of political normalisation between the UAE, Bahrain and Israel, Palestinian media circles and journalists have warned against the popular Nas Daily, which millions watch on Facebook and other social media. They have demanded that subscribers should boycott the show, and accuse it of normalising with Israel under UAE auspices.

The normalisation agenda aims to train Arab content creators, through the Nas Academy, which includes Israelis among the staff headed by Jonathan Bellick. The academy is financed by the New Academy, which was established two months ago by the ruler of Dubai and Vice President of the UAE, Mohammed Bin Rashid. This demonstrates the UAE’s complicity in the efforts to support Israel and its occupation, transform it into an integrated entity in the region, and liquidate the Palestinian cause.

The programme is run by Nuseir Yassin, a young Palestinian man, whose family left the country during the 1948 Nakba. Yassin has been accused by the National Committee of the Palestinian Boycott, Divestment and Sanctions (BDS) movement of “promoting soft normalisation, by camouflaging the true context of the occupation and its nature, which is immersed in a culture of criminality and ethnic cleansing; thus serving Israel’s efforts to impose its presence as a natural entity in the region, by extending bridges of formal and informal normalisation through media and influencing public opinion.”

The danger of this normalisation campaign resides in its sponsors’ desire to market the stereotypical benign image of Israel which is actually far from the reality of the occupying state. It does this by promoting videos that lack political content and context. Legitimate Palestinian rights are ignored, and it is viewed as an asymmetrical conflict rather than one between an occupier and the occupied.

READ: The UAE Regime Prevents A Former Diplomat From Travelling As Punishment For Her Views

Many Palestinian and Arab content creators (trainers and trainees alike) have taken a moral stance against normalisation and withdrawn from the programme. They have exposed the ongoing agenda via their own social media pages, which have tens of thousands of followers.

In doing so, and exposing the danger of cultural and media normalisation, they have been targeted by the Nas Academy, which has defamed everyone who withdrew from the programme as “failures”.

The UAE-sponsored academy seeks to attract young content creators from Palestine and the Arab world, who will be trained under an Israeli supervisor with other Israelis on the staff. The objective is to erase the historical narrative about Israel by promoting its developed lifestyle and use of high-level technologies, while overlooking its history of hostility to the Palestinian people.

In its efforts to portray the Palestinian-Israeli issue as a conflict between equal parties, Nas Daily even holds the Palestinians responsible for igniting the conflict because they rejected the alleged US-sponsored peace treaty. This message is reaching a lot of people, because social media algorithms support content creators who post regularly on their platforms, especially young people, who digital companies regard as long-term investments.

Yassin’s obvious skills mean that his content is short with attractive visual effects and technical innovation. The content is interesting and attractive to young people with a focus on travel, meeting new people and discovering other cultures. He is honest and earnest when talking about people around the world, but when it comes to his own people in occupied Palestine, he is over-simplistic: “Some Palestinians left, some were killed, others remained in their lands, but they are still my people.”

He is deceitful in the way that he poisons minds and hearts to alter awareness of the conflict. For example, he only refers to the Zionist entity as a modern, tourist-friendly and democratic destination, while trying to convince his viewers of the importance of peace with Israel.

As far as its output demonstrates, not one of the Nas Daily team has ever visited a refugee camp to show the world what life is like for millions of Palestinian; or captured on camera the suffering of displaced Palestinian families as they watch Israeli settlers stealing their home. Nor have they sought to interview the Palestinian women imprisoned by Israel, and they never will, for that would destroy the illusion that they are paid to create.

I tried to contact some of the aforementioned Arab content creators. One agreed to talk on condition of anonymity: “I joined the Nas Academy but withdrew when the BDS movement reached out to me. I told BDS that the participants have a right to advocate for the Palestinian cause against the Israeli occupation, away from all the brainwashing attempts or efforts to control the message promoted by the content creators on social media.”

Some Palestinian media sources have told me that Nas Daily management puts pressure on these content creators to go back to the academy by threatening them and then offering incentives alternately.

At a time when the Arab and Gulf regimes, the UAE, Bahrain and Saudi Arabia in particular, hasten to conclude normalisation deals with the Israeli occupation, Nuseir Yassin attempts to infiltrate the minds of the Arab masses who believe that their freedom, progress and struggle for justice is bound up with the Palestinian people’s freedom and the return of the refugees to their homeland.

Nas Daily usually depicts public and personal issues, while trying to avoid thorny political matters. It shows occupied Palestinian cities without illustrating any political aspect of the situation or revealing the agony of the Palestinian people. In its own vague and conceited way, it is simply promoting normalisation, albeit in a clever way.

The management knows that provoking a wave of criticism will probably increase the number of viewers on Facebook. It also points out that Israel is pumping significant amounts of money into misleading normalisation campaigns, but does so with the intention of portraying Israel as a developed country that could help its Arab neighbours. As I said before, this is far from the reality of its vicious crimes against its Palestinian neighbours that the world really should associate with a colonial and racist regime.