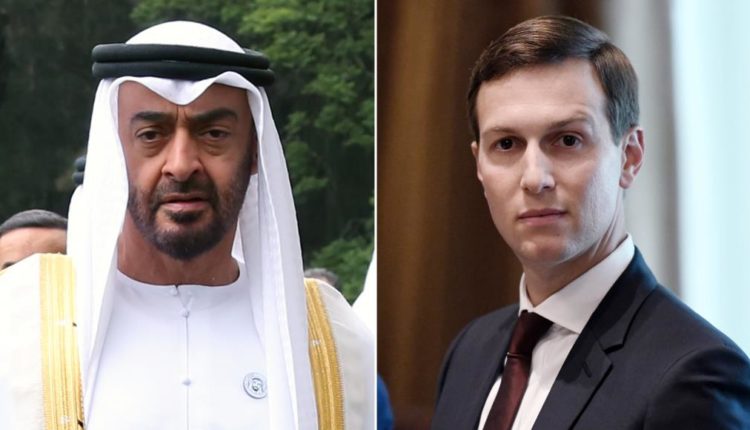 Secret meeting between Kushner and MbZ to discuss The Deal Century

Kushner, who is on a new Middle East tour to promote his plan on the Palestinian-Israeli conflict, met in Morocco with MbZ, the Jerusalem Post reported.

The paper said that the secret meeting discussed pushing the American plan to settle the Palestinian issue known as the “Deal of the Century”.

The newspaper quoted a US official that the meeting between Kushner and his companions and MbZ was to be held in the UAE, but was decided to be held in Morocco, where he currently exists.

The US source described the talks between Trump adviser and MbZ as fruitful, pointing out that they follow the Bahrain workshop held in late June, during which the economic aspect of the American plan for the Palestinian-Israeli conflict, which is likely to be announced before the end of this year, was revealed.

The delegation discussed where the funding for the US economic plan should be based, and support its presence in Bahrain, to show that the countries of the region are behind the plan, the Jerusalem Post said.

The US plan is to create funds and inject tens of billions of dollars into it to improve economic and social conditions in the Palestinian territories, Lebanon, Egypt and Jordan.

The Israeli newspaper pointed out that an American official told it last week that the US delegation’s tour led by Jared Kushner aims to complete the economic part of the US plan, and to discuss possible financial resources to finance this project.

Palestinian officials called on Arab officials not to meet with Kushner and his companions and reject the deal of the century aimed at eliminating the Palestinian cause and pushing the pace of normalization between Arab countries and Israel.

Credible leaks has revealed of the United States that the proposals of Mohammed bin Zayed is the essence of the plan to deal with the American century seeking to liquidate the Palestinian cause.

The New York Times reported that Kushner had relied on MbZ’s proposals to settle the Palestinian-Israeli conflict.

The newspaper said that MbZ is the first to provide a vision for an external settlement of the Palestinian issue and adopted by the Trump administration.

The newspaper added that these proposals are the same as those rejected by the administration of former President Barack Obama.