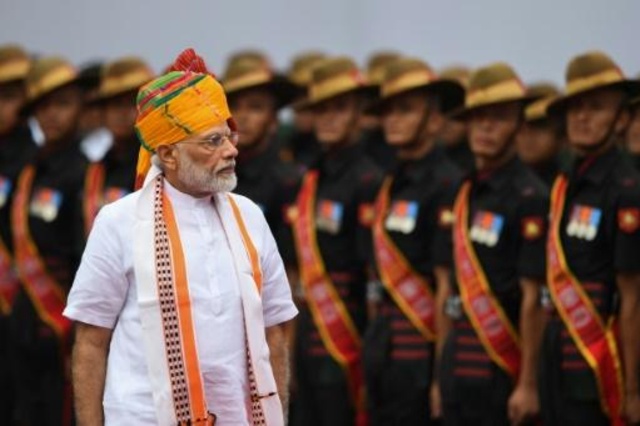 The UAE is the first country to receive the Indian Prime Minister Narendra Modi at a time when his extremist government is stepping up repressive measures against Kashmir and Muslims in the country.

Modi’s intention to visit the UAE on Friday was unclear, Abu Dhabi said, without specifying what role Abu Dhabi would have in pressuring New Delhi to halt its actions in Kashmir, stop targeting Muslims in India and encourage dialogue with Pakistan.

But this role is unlikely for the UAE regime, which seeks only to its interests and even harms Muslims internally and incites them externally.

Ahmed Al Banna, Abu Dhabi’s ambassador to New Delhi, was quoted by the English-language Gulf News as saying that India’s move to abolish Kashmir’s self-rule would encourage more stability and peace, revealing that UAE officials in India had supported the decision.

Muslims in India and Kashmir are facing a fierce Hindu nationalist campaign reported by the New York Times, warning of the launch of the government of Modi detention camps that can accommodate four million Muslims alleged to be refugees, as China does with the Uighurs.

The Gulf states remained silent in most of their positions when the Indian government moved to strip Indian-administered Kashmir of limited autonomy, imposed a broad military curfew in the disputed Muslim-majority region and cut off the population from all communications and the Internet.

This silence is driven by more than $ 100 billion annual Gulf trade volume with India making it one of the most economic partners in the Arabian Peninsula.

But the UAE has taken a step forward by standing by India, calling the Indian decision on Kashmir an internal matter.

Saudi Arabia’s response to military repression in Indian-controlled Kashmir is complicated by its close ties with both India and Pakistan, which have fought wars in the disputed region, as well as ideological rivalry with Turkey and Iran to lead the Muslim world.

The agency pointed out that Pakistani Prime Minister Imran Khan contacted leaders of Saudi Arabia and Bahrain in recent days to discuss India’s actions in Kashmir, but it is unclear whether he would find Arab support if he conveyed his concerns to the UN Security Council.

Khan criticized the silence of the international community over Kashmir, wondering if the world would soon see another “Srebrenica massacre and ethnic cleansing of Muslims”, referring to the Bosnian war in the 1990s.

“I want to warn the international community if this is allowed to happen,” Khan said. “It will have severe repercussions and reactions in the Muslim world that will increase extremism and push for cycles of violence.”

At the same time, the brief Saudi statement on Kashmir did not directly refer to military curfews or interruptions in disputed territory. He said the kingdom was “following the current situation” and called for a “peaceful settlement” in line with international resolutions.

The Gulf Arab states are home to more than 7 million Indian expatriates who help drive the region’s economy and preserve its cities teeming with doctors, engineers, teachers, drivers, construction workers and other workers.

There is no clear place in this region to illustrate the size of the Indian presence in the Gulf such as the UAE. Indians in the country are three times more UAE nationals, and bilateral trade exceeded $50 billion in 2018, making India the second largest trading partner of the UAE.

Indian investments in the UAE amount to $55 billion, and Indians are the largest foreign investors in Dubai’s property market, according to the Indian Ministry of External Affairs. Meanwhile, DP World plans to develop a logistics center in Indian-controlled Kashmir.

The UAE has doubled the strategic relationship by signaling its support for the government of Indian Prime Minister. New Delhi was quick to send tens of thousands of extra troops to Kashmir, already one of the world’s most militarized areas. Troops were deployed to prevent unrest and protests against the August 5 decision to strip the territory of its own constitutional status.

Local media in both countries quoted UAE Ambassador to India Ahmed al-Banna as saying that the changes in Kashmir “will improve social justice and security… and increase stability and peace.”

The decision by the Hindu nationalist government of Modi carries religious references to Muslims living in Indian-administered Kashmir.

According to the agency, “the abolition of the constitutional situation in the region, which needs the approval of the parliament controlled by the ruling party, means that the Kashmiris lose their genetic right to jobs, scholarships and land ownership.”

Government critics see the move, which would allow Indians from outside the region to permanently settle and buy land, as an attempt to change Kashmir’s culture with many Hindu settlers.

Hassan al-Hassan, an expert on Gulf-Indian relations at the International Institute for Strategic Studies, said that these religious tensions have made Kashmir another area of ​​competition between Saudi Arabia, Iran and Turkey to support Islamic causes around the world.

Iran allowed a symbolic protest by about 60 students outside the Indian embassy in Tehran last week.

Nevertheless, President Hassan Rouhani and the Foreign Ministry alike made more subtle statements calling for dialogue and peace between Pakistan and India. The diversified response comes as bilateral trade falls following India’s decision to stop buying Iranian oil because of US sanctions on Iran.

Gulf Arab states may also be wary of upholding the rights of Kashmiris because they focus on “the right of people to their freedoms,” said Hafsa Kangwall, an assistant US Kashmiri professor of South Asian history at Lafayette College.

Bahrain, an ally of the UAE regime, arrested a number of people after South Asians protested there in support of Kashmir and against India after Eid prayers.

Kangwall said: “Kashmir is linked to movements for self-determination, people’s rights and democracy, which the Gulf countries and Israel strongly opposed and feared much.”

India’s decision to abolish Kashmir’s constitutional self-rule has caused anger and division in the remote Himalayan region, even as supporters of Moody cheer the surprise move.

Since Moody’s shocking decree, protests and celebrations in many cities have widened religious fault lines between communities in this strategic region.

Kashmir has been divided into Indian and Pakistani territory since the two countries gained independence in 1947. Indian Kashmir has been plagued by a separatist insurgency that has killed tens of thousands.

The new resolution provides for the division of the Indian part of Kashmir into two areas directly under the authority of New Delhi. The international focus has been on the Kashmir valley, where thousands of troops have been deployed, telephone lines and Internet are blocked to prevent opposition movements to protest the Indian government’s decision.

But those arrangements have not prevented tensions from spreading to other parts of the state, which will be cut in half under the new administrative arrangements.