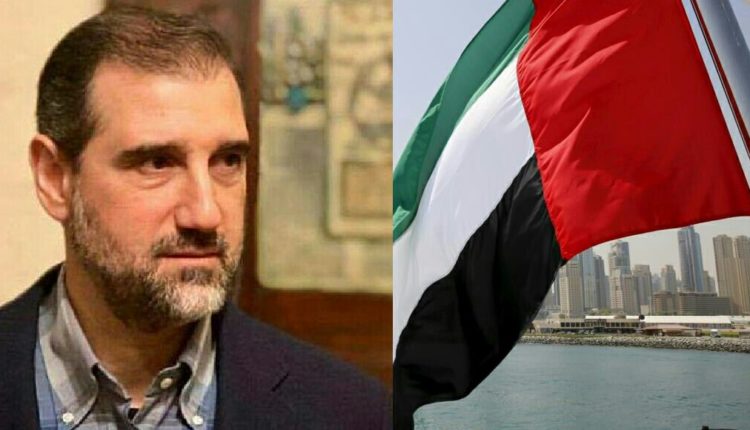 An international human rights organization revealed that the UAE is keeping Rami Makhlouf, the businessman and cousin of the president of the Syrian regime, Bashar al-Assad, who is one of the most prominent figues of corruption in Syria.

Guernica 37- International Chamber of Justice, concerned with legal and international issues, said in a statement that Makhlouf is currently suspected of being in the UAE despite his inclusion on the list of US and European sanctions for his involvement in public corruption, and has been funded by the brutal destruction of the pro-democracy revolution since 2011.

The international organization called for the trial of Makhlouf for his role in inciting crimes committed by the regime forces against Syrian civilians over a period of nine years, affirming that Makhlouf is part of a criminal project led by the Syrian President, and implemented by a network of supporters within the branches of the regime’s intelligence.

The human rights organization called on the United Arab Emirates to respect its obligations under international treaties and not to allow its lands to be used as a safe haven for people accused of supporting war crimes.

According to the US Treasury, Makhlouf used intimidation and close ties with al-Assad to seize public funds and engage in corruption, and is believed to be a central figure with a destructive and destabilizing effect.

Makhlouf is considered one of the most prominent economic figures in Syria, and in addition to the company “Sertil”, he owns the “Al-Bustan” association, and broadcasts loyal to the Syrian regime. He also owns the private newspaper “Al-Watan” and runs companies for cars, in addition to economic activities represented in various sectors such as exchange, gas, trade, and real estate.

The Emirates Avers website had quoted private Syrian sources late last year that Rami Makhlouf, a businessman, would leave Syria for the UAE, after a previous decision to seize his money on charges of smuggling in order to guarantee the rights of the public treasury.

The UAE has become a haven for tyrants and leaders of counter-revolutions, the most prominent of which is Muhammad Dahlan, the expelled member of Fatah, who was embraced by the UAE after escaping from a prison sentence in May 2011.

The expelled Dahlan became a security adviser to Mohammed bin Zayed, despite the accusations levelled against him of involvement in the assassination of Yasser Arafat and the suspicious relations with Israeli officials.

The Emirates houses the sister of the President of the Syrian regime, Bashar Al-Assad, Bushra, and has allowed the regime’s symbols to invest in it, and it has given them the opportunity to participate in financing the killing of innocent people of the Syrian people.

Former Minister of Industry and Trade Rashid Mohamed Rashid was the first to open the doors of the UAE to fleeing the remains of the Mubarak regime.

The UAE also houses a number of corruption symbols in the regime of Libyan Colonel Muammar Gaddafi, including Mahmoud Gabriel, Minister of Planning during the Qaddafi era, and Abdel-Majid Malikta, one of the important symbols in the National Forces Alliance led by Gabriel, who is the brother of Othman Melikta, leader of the Qaqaa Brigades.

Outside the Arab region, the UAE has embraced a number of symbols of corruption around the world, including former Thai Prime Minister Engluk Shinawatra, who faces corruption charges.

Also, former Pakistani Prime Minister Pervez Musharraf, who is accused of several corruption cases, rushed to Dubai on the pretext of travelling to receive medical treatment after the Supreme Court in Pakistan ordered the government to lift the travel ban.

Also, on the list is former Pakistani President Asif Ali Zardari, who fled to the UAE for fear of being arrested for financial misappropriation of billions of dollars, after the arrest of his closest aides.

The European security report stated that the UAE has become a centre of increasing money laundering and fraud operations, in addition to the resort of the major financial and economic criminals to the country.