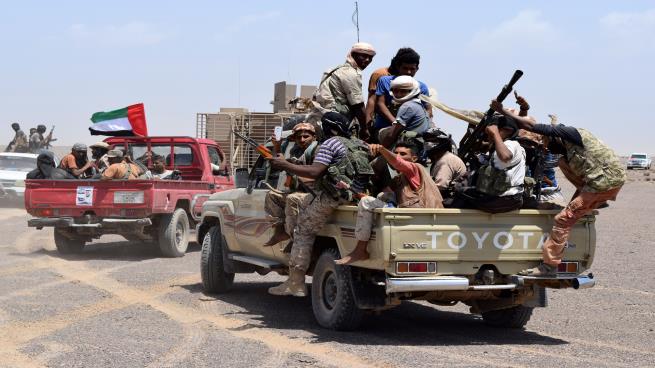 The UAE regime’s current goal is to support the secession of Yemen as a strategic goal that it has started to implement by all means available after its move to reduce its forces in the.

On the contrary, it has recently supported the establishment of new forces under its separatist political arm in the south of Yemen, showing a contradiction between the statements made by UAE officials about a plan to support peace and the reality that does not spare any effort to impose the partition plan.

Over the past 48 hours, a tweet of the former Crown Prince of Abu Dhabi, Abdulkhaliq Abdullah, provoked a wave of disaffected Yemeni reactions, which included a provocation to Yemenis by saying that “there will be no single unified Yemen after today.”

This reflects precisely what Abu Dhabi has been doing since the first months of its military intervention alongside Saudi Arabia in Yemen and is led by the alliance’s influence in the southern provinces of the country.

While the UAE, through statements made by its officials in recent weeks, has tried to convey messages that it has begun a new trend that supports peace and stability, it continues to support the separatists through the so-called Southern Transitional Council and its military and security formations.

In addition to all the military formations outside the authority of the Yemeni government, Aden recently witnessed the announcement of a new force called “First Brigade Thunderbolt,” along with the limited UAE withdrawals.

This is an additional indication that Abu Dhabi’s “peace first” plan is no more than a limited retreat of its direct presence. That allows it to continue its strategy of supporting the partition of Yemen after some precautions have been taken to reduce the consequences of this policy in the face of growing Yemeni resentment against the role of the UAE.

Since the early months of the alliance’s frontline in Aden, the UAE has created “security belt forces” from a mix of separatists and Salafis.

Abu Dhabi similarly established the forces of the so-called “Hadramout Elite” and the “Shabwani Elite” in the East. All of which were based on regional bases that did not recognize the unity of Yemen. They also represented a threat even in the presence of “south” and “north.”

In addition to the military arms, which do not consider raising the banner of Yemen as one of the taboos in their camps, Abu Dhabi founded the political wing of secession in Yemen in May 2017. The Southern Transition Council, which initially presented itself as the alternative power of the “south state” retreated under the pressure of the scandal in which the UAE supported a coup against legitimacy in exchange for considering that the declared goal of the alliance is to support the legitimacy against the coup of Houthis.

However, the UAE has been supporting the Council in strengthening its influence and strengthening its military wings. In an article written by UAE Minister of State for Foreign Affairs Anwar Gargash in The Washington Post a few days ago, he stressed that the UAE would continue to support Yemeni forces. He added that his country would continue to exercise the same role and send reassuring messages to its local arms, which is supported as part of a strategy to divide Yemen.

The United Arab Emirates has deployed tens of thousands of mercenaries as part of armed militias to spread chaos and sabotage in Yemen, while publicly promoting the push for partition.

Following the UAE’s decision to significantly reduce its military presence in southern Yemen, many possible explanations for this move have emerged, but one of the main reasons for this is that the Emiratis are increasingly denigrated in the war in Yemen, according to the US Monitor website.