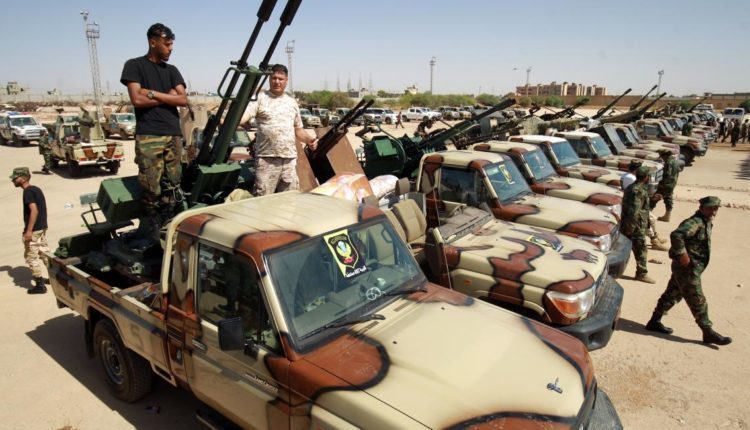 Libyan sources revealed that the United Arab Emirates provided Khalifa Haftar militias in Libya with drones, including Israeli-made, to serve Abu Dhabi’s plots to spread chaos and sabotage in the country.

The sources said that an Emirati military cargo plane landed in mid last week at the military base of Al-Jafra in central Libya, which is controlled by fighters of the Russian “Wagner” company, and was carrying large quantities of military equipment.

The sources said that the UAE has provided militias in eastern Libya, and the mercenaries recently allied with them, with five drones, which are relatively new on the battlefield in Libya, since the military campaign launched by the militias of retired Major General Khalifa Haftar on the capital, Tripoli, in an attempt to establish control over the entire Libya and overthrow the internationally recognized Government of National Accord. However, Haftar faced a series of major defeats that ended in his expulsion from the entire of western Libya.

The sources pointed out that Abu Dhabi recently provided, in complete secrecy, the militia of Haftar with three Israeli-made “Heron” drones, pointing out that it has great capabilities, as it can carry large quantities of explosives.

The Heron TP, also known as the IAI Eitan, is used by the Israeli occupation army in its war operations. It can carry a large amount of weapons and communication systems. The drone can carry air-to-surface missiles and guided bombs. It can fly for 30 hours in the air at speed exceeding 400 kilometers per hour.

The sources pointed out that Abu Dhabi provided Haftar forces with two “CH5” drones, produced by the Chinese “CASC” company, that can carry out combat missions, in addition to surveillance operations.

These armaments come in light of a continuous mobilization of the parties to the Libyan crisis and their supporters, in preparation for the expected battle of Sirte and Al-Jafra, amid escalating international demands for a political solution to the crisis and a ceasefire.

This comes as Libyan Army Chief of Staff Lt. Gen. Muhammad Al Sharif said that the forces of the Government of National Accord are intent on liberating entire Libya, and that the city of Sirte is the next target of his forces.

Mohammed Al Sharif added in a television interview that the UAE had wagered on Khalifa Haftar and had lost a lot after the attack on Tripoli.