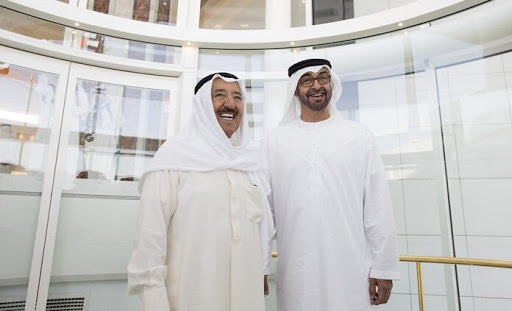 Despite that more than a week has passed since the end of the work duties of its former ambassador, who was expelled by the Kuwaiti authorities because of his suspicious behaviour, the UAE has refrained from naming a new ambassador to it in Kuwait.

Emirates Leaks learned from informed sources about a silent crisis between Kuwait and the Emirati regime that is still overshadowing the appointment of a new ambassador to Abu Dhabi in Kuwait, which prompted Abu Dhabi to postpone the move.

According to the sources, diplomatic contacts took place between Abu Dhabi and Kuwait in an attempt to end the file and not keep the position of the Abu Dhabi ambassador to Kuwait vacant for a longer period of time, which threatens to deepen the crisis even more.

And five days ago, Informed sources told Emirates Lakes that recent announcement that UAE ambassador to Kuwait, Saqr Al-Raisi, ended his work came at the request of the Kuwaiti authorities, due to his suspicious behavior in the country.

The sources confirmed that Kuwait asked Al-Raisi to leave the country within two weeks after discovering that he has participated in paying some Kuwaiti politicians and media professionals to mobilize them to support Abu Dhabi’s political positions.

Foreign Minister Sheikh Ahmed Nasser Al-Muhammad few days ago unexpectedly received Al-Raisi “on the occasion of the end of his term as ambassador of his country to Kuwait,” as announced by the official Kuwaiti News Agency.

Nasser tried to maintain the diplomatic atmosphere in the relations with the Emirates by emphasizing keenness to “strengthen the strong bonds of fraternal relations between the two countries.”

Al-Raisi, 55, began his work as an ambassador to the Emirates in Kuwait in the beginning of 2019. He spent in his position only a year and a half, which is an unusual short period of time for an ambassador.

Al-Raisi was known during his work in Kuwait to be seeking to expand the UAE influence in the country by trying to mobilize politicians and media professionals to influence their positions with regard to the Gulf crisis. However, he failed to do so until he was exposed.

It is known that Kuwait is the main meditator to solve the Gulf crisis that started in mid-2007, following the announcement of the UAE, Saudi Arabia, Bahrain and Egypt to impose a blockade on Qatar. Abu Dhabi has ever since been the first obstacle to Kuwait’s efforts.

Weeks ago, the French news agency, Agence France-Presse, said in a report, quoting well-informed Arab sources and diplomats, said that the UAE is working with all its might to sabotage efforts to solve the Gulf crisis.

The agency quoted the sources as saying that Abu Dhabi does not want Gulf reconciliation to happen and is trying to keep Saudi Arabia and other countries boycotting and blockading Qatar.

The agency quoted two sources it described as familiar with the Gulf reconciliation negotiations, as saying that there are people in Abu Dhabi who are rejecting restoring the previous relations with Qatar.

About a year ago, Emirates Lakes revealed that Kuwait’s rejection of the blockade and Gulf crisis prompted the rulers of the Emirates to start a new plan to destabilize the security and stability of Kuwait by controlling the media in Kuwait to distort the image of the state just like in Egypt and Libya.

Meanwhile, Kuwaiti sources confirmed that the UAE has already started to implement this scenario and to purchase media outlets from Kuwaiti newspapers and channels, in order to guide and control the political decision in the future in Kuwait.

The beginning, according to the sources, consisted of buying a large portion of the shares of the establishment that owns the famous Kuwaiti newspaper “Al-Rai”. Al-Rai newspaper is considered one of the first influential newspapers in Kuwait along with Al-Qabas and Al-Jarida newspapers.

Al-Siyasa newspaper is affiliated with the blocked leaders and their political line, through the Saudi-Kuwaiti Ahmed Al-Jarallah, its owner and editor-in-chief.

Observers point out that the UAE is seeking to destabilize Kuwait because of its neutral stance towards the Gulf crisis, and the ruling family’s failure to respond to Saudi and Emirati demands to align them with them in the Gulf crisis.