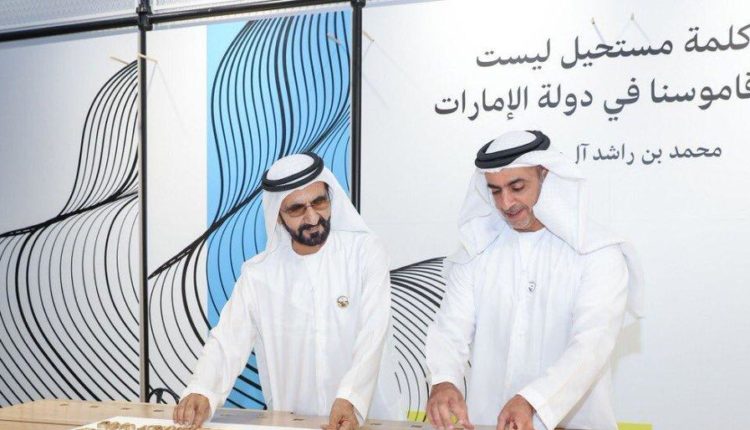 The UAE regime continues its showing off and false slogans, promoting a reality that is contrary to the reality of unprecedented oppression, and economic stagnation of the country.

“Today we launched a new system of work within the government of the UAE,” Bin Rashid said on his Twitter account. “noting that” it is an unconventional ministry, without a minister, its staff members of the Council of Ministers.”

“The new ministry is working on important national files and building new government systems for the future,” he said.

In 2016, the UAE had established ministries of happiness, tolerance, and youth.

The official media of the UAE regime is dedicated to promoting false slogans of happiness and prosperity that it works to make it available to citizens and expatriates.

However, these brilliant slogans contradict with the reality of oppression record rates in the state as well as the worsening economic crisis that has become the present and future of the UAE.

In the UAE popular literature, there are many stories about the “Aum Hellen” a woman with demonic behavior, which is aimed at tearing houses, committing abuses and spreading enmity among people, and blaming others. This mythical figure resembles the institution of the state security apparatus, which carries out the same evil deeds.

The violations committed by the UAE security and system are large and wide aimed at the structure of the UAE society. Preventing the families of the detainees from visiting, and demonizing them in the community is an insult to the UAE, its elders and great leaders.

Human rights activist Ahmed Mansoor entered the fifth decade of his life after two years in prison in the security services because he demanded equal citizenship rights and defended the oppressed. He entered his third week of hunger strike, where he lives in a cell without a bed and access to the bathroom.

The security apparatus denies Emiratis from their freedom even after the end of political sentences against them, like what happened with Osama Najjar, Abdul Wahid Al-Badi and Said Buraimi, the successor of Rabia and Othman Al-Shehhi, whose sentence ended years ago but they still in prison in violation of the law UAE.

The detainees’ lives in the prisons of the state security service are in danger. Some detainees health status is unknown because they have been denied visits and contact with their families for months. They suffer deliberate violations because they express their opinion and demand reform.

If “Aum Hellan” is a legend associated with the tales of grandmothers, the state security apparatus implements the medieval methods in the face of freedom of opinion and expression and the right of Emiratis to equal citizenship. In contrast to grandmothers tales, what is done is facts that need to be stopped and confronted, it targets every Emirati and resident in the country.

Israel celebrates its privileged relations with UAE amid Palestinian range