Newspaper: UAE tolerant with all religious practices except Islam 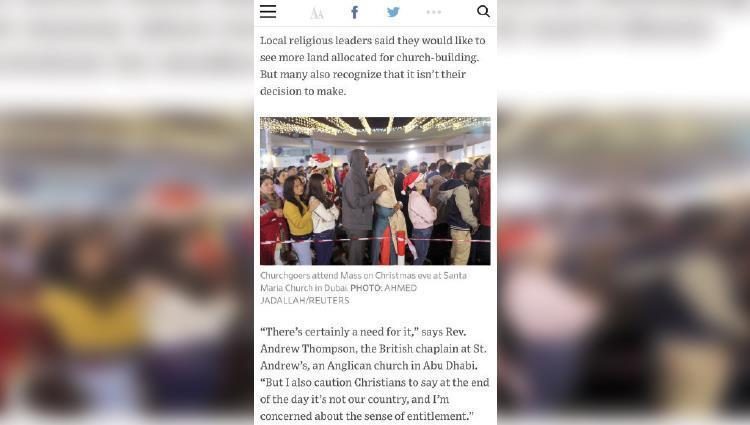 The Wall Street Journal published a report on the state of religion in the UAE, which showed that the ruling regime in Abu Dhabi tolerates all religions except Islam.
“Every Friday, on the fourth floor of a hotel conference center in this Arab business hub, several thousand Christians arrive to worship in two-hour shifts at what may be the world’s best-hidden megachurch,” said the newspaper in an article entitled: In Arab Nation, Christians, Buddhists and Jews Emerge to Worship

The newspaper says there is no sign outside the center to guide people to the Fellowship, a Protestant group that emerged a decade ago in a mainly Muslim country where non-Muslim religious activities are monitored and church construction is permitted only with limited permits.

However, restrictions on places of worship in the UAE have been mitigated. The UAE government, in an effort to market a “tolerant” image, has decided that 2019 will be the Year of Tolerance and that there is space to seek common ground in a war-torn region.

The UAE will show its attitude to coexistence during Pope Francis’ visit next month, the first visit of the pope to the Arabian Peninsula. His program includes participation in a dialogue of religions and mass leadership at a football stadium with a capacity of 120,000 people.

“Fellowship” began with a number of people but it has grown and attracted 4,000 people from all religious backgrounds to its prayers in two hotels.

These activities reflect the openness of the UAE to non-Muslims, which has increased in recent years when it built relations with Western countries that value freedom of worship and sought ways to weaken the power of what they call “Islamic militants.”

There is a Buddhist temple that serves Sri Lankans, Cambodians and Thais who work from inside a villa in Dubai.

Leaders uncovered a synagogue in Dubai after it was operating in secret. There is also a Hindu temple under construction. Religious institutions serve a population, mostly foreign workers from Asia, Europe and elsewhere.

The rulers have allowed churches to be built since the 1960s and have expressed religious tolerance more than their Saudi neighbors, who prohibit any form of worship for non-Muslims.

Despite its tolerance of other religions, the newspaper says the UAE does not show any tolerance for Islam. The government makes written speeches to imitate mosques.

In the UAE there are 45 churches serving 700 Christian communities. Prayers and religious rituals are usually performed on Friday because it is the official holiday in the country.

The phenomenon of churches in hotels began in Dubai a number of years ago after the existing churches were unable to accommodate the large number of Christians. The gatherings began to appear in different parts of Dubai, but authorities prevented them on the background of violating the instructions.

Only three churches, including “Fellowship,” were allowed to hold church meetings after an appeal to Sheikh Nahyan bin Mubarak Al-Nahyan, who was appointed minister of tolerance in 2017.

During a meeting between a delegation of Evangelical leaders and the Crown Prince of Abu Dhabi Sheikh Mohammed bin Zayed, the subject of gatherings that cannot meet because of that decision was raised. A number of local leaders expressed their hope for gradual progress and improvement in the future.

The evangelical leaders came out of their meeting with Mohamed bin Zayed with the impression that the ban had nothing to do with the persecution of Christians but because of the lack of bureaucratic instructions to approve the construction of new churches.

Bloomberg: Dubai’s Property Slump Has Another Two Years to Run