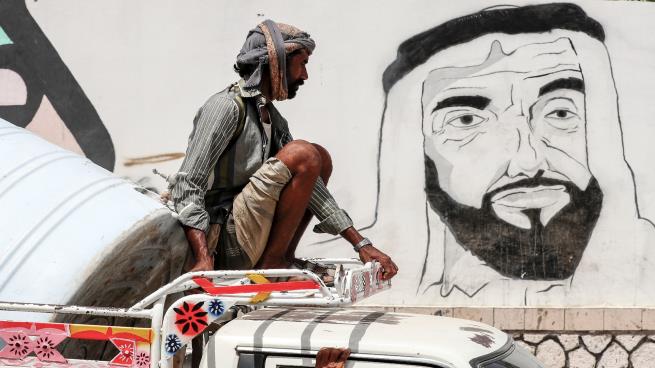 The United Arab Emirates (UAE) crisis is escalating with Yemen’s legitimate government at the same time with widespread popular anger amid a consensus calling for an end to the war in the country.

For the second time in a few days, a Yemeni official launched direct statements calling for the expulsion of the UAE from the Saudi-led coalition in the country, amid growing public anger against the practices of the UAE and its continued obstacles to the Yemeni government and preventing it from exercising its functions in the southern provinces.

In his latest statement, Yemeni Transport Minister Saleh al-Jubwani said on his Twitter account that the legitimate government should take visits by leaders of the so-called transitional abroad seriously as they travel to these capitals from Abu Dhabi. Referring to the visit of a delegation from the “Transitional Council” to the Russian capital Moscow, the role played by Abu Dhabi against legitimacy, and that the latter will not remain silent.

The Yemeni minister of transport is the second official to issue a statement calling for correcting the relationship with the UAE or ending its role in the alliance that leads it with Saudi Arabia in less than ten days. Statements were made by Yemeni Governor Mahweet Saleh Samee in a television interview in which he said that the Yemeni President must make a decision if a party of the coalition continued in its tyranny, in reference to the UAE, stressing that Yemen is a country of 30 million citizens and is not a game.

The statements made by Yemeni government officials after the past months, and especially since June 2018, witnessed a calm in which Abu Dhabi sought to ease the tension with the Yemeni government, after a formal complaint submitted in May to the UN Security Council of the practice of the UAE In the country, which amounts to attacks on Yemeni territory.

However, the crisis has finally returned, with Abu Dhabi continuing to impede the Yemeni government from performing its duties in the southern regions of the country, as well as the return of the “transitional” secessionist activities announced in 2017 with generous support from Abu Dhabi.

It is worth mentioning that the Yemeni statements come in conjunction with the rising popular tide against Abu Dhabi and its security and military arms in the southern provinces of Yemen, in the time Aden has seen in recent weeks a wave of protests.

A British sues UAE for torture after arbitrary arrest