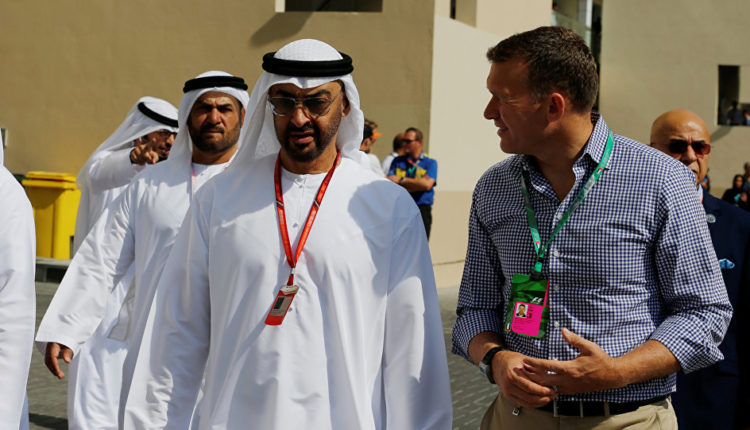 The American “Interspect” site addressed Erik Prince’s return, the founder of Blackwater, to the scene, and his relations with the Russians and Mohammed bin Zayed (MbZ), in a detailed report by Matthew Cole.

When Prince arrived at the Four Seasons Resort in Seychelles in January 2017 for a meeting with a Russian banker and MbZ, he was halfway to his “unexpected” return, Cole said.

He added that the election of US President Donald Trump “had given the disgraced Blackwater founder a new opportunity to prove himself.” After years of trying and failing to see a comprehensive war of mercenaries around the world, Prince returned to the game.

Prince, a former US Marine Corps official and the brother of US Education Secretary Betsy DeVos, founded the private mercenary company, Blackwater, known for its scandal to Iraq, where it was banned in 2007 after its agents opened fire on unarmed civilians in Baghdad and killed 17 people.

UAE and the new US administration

The report reveals that MbZ brought together a group of UAE royal family members and close advisors at the luxurious Four Seasons Resort in India to attend a major strategic session in anticipation of the new US administration Trump.

On the agenda were discussions on new ways of dealing with wars in Yemen, Syria, and Libya, Isis threat and the UAE’s long-standing rivalry with Iran.

The report states that under the leadership of MbZ, the UAE has used its oil wealth to become one of the world’s largest arms buyers and the third largest importer of US arms. And that the presence of a new US president means new opportunities for Abu Dhabi to exercise its huge military and economic influence in the Gulf region and beyond.

Cole says that Prince was not a stranger to the UAE. He knows MbZ, the de facto ruler of the United Arab Emirates, was known since 2009 when he agreed to establish an elite counter-terrorism unit. An agreement that ended badly for Prince, but the election of Trump rearranged. As a prominent supporter of Trump and a close colleague of Steve Bannon, not to mention the brother of the new minister, Betsy Devos, Prince was invited to the meeting “as an informal adviser to the incoming US administration.”

When Prince joined the royal family in Abu Dhabi and other government officials, MbZ made it clear to everyone that “Erik was his guy,” said a source close to UAE nationals familiar with the meeting.

Prince, from MbZ point of view, the founder of an elite land force that MbZ had deployed in the wars of Syria and Yemen, is the first foreign conflict in the history of his country.

It was because of Prince, MbZ said, that the Emiratis had no terrorists in their country. Prince had solved their problem with Somali pirates. “He let his court know that they owed Erik a favor,” the source said.

Prince’s partnership with MbZ began in early 2010. Prince arrived in the UAE at a difficult time for him. The Obama administration has made it clear in its first months that it will not welcome new Blackwater contracts.

The company became infamous after its scandal in Iraq when its mercenaries opened fire on unarmed civilians, killing 17 Iraqis and injuring dozens at Nisour Square in Baghdad in 2007.

Prince, a converted Catholic raised by Christian fundamentalists and the scion of a Midwestern auto-parts fortune would don’t seem to be an ally to the Muslim crown prince, but from their first meeting in 2009, Prince and MbZ hit it off. Almost immediately it was clear they shared common enemies: Islamic militants.

Prince was presented to MbZ after a two-page plan of a light attack aircraft, modified with surveillance and laser-guided munitions, was presented to the UAE government during the sale of Blackwater to a private equity group.

When the UAE ambassador to the United States, Yousif al-Otaiba, learned that Prince’s legal problems with the Justice Ministry would mean he would not be able to participate in building, selling or brokering an armed aircraft, the UAE government contacted another airline manufacturer to help establish a full air wing of these armored aircraft and weapons. In exchange for Prince quietly abandoning the deal, Otaiba presented to MbZ explicitly to find another role in which he could help the UAE government.

MbZ was determined to strengthen the UAE’s influence in the Middle East. Despite Prince’s disgraceful reputation of the MbZ saw in him a future glimpse.

MbZ insisted that Prince used former non-Muslim soldiers, according to senior advisers who helped build the unit, and told him he did not believe Muslim soldiers could be trusted to kill other Muslims, the report said.

Prince traveled to South America, where he helped oversee the recruitment of former Colombian soldiers who served as “hired guns and training staff for emerging UAE security forces.”

Over a six-month period beginning in late 2011, after the New York Times revealed Prince’s involvement with the UAE’s security support group and the deployment of the anti-piracy force, MbZ gradually removed Prince from several government projects.

The rise of Trump and the return of Prince

The 2016 presidential election and the rise of Donald Trump were the stages of “widespread rehabilitation of Prince.” The Republican administration will give the opportunity for new US government contracts, and perhaps something more profitable.

After Trump was nominated by the Republican Party, Prince told associates in Chinese trade and government circles that “if Trump wins, he will be the next secretary of defense.”

The Prince family has a history of supporting right-wing and conservative issues. Edgar Prince, Erik’s father, was a major contributor in funding the former President Gerald Ford, and in recent years, his family supported Mike Pence, first as a member of Congress and later governor of Indiana.

While in Congress, Pence helped Prince to get out of the Capitol Hill building following the killing of four Blackwater contractors in Fallujah in 2004. Prince became an enthusiastic supporter of Trump. By election day, Prince has donated $ 250,000 to Trump’s 2016 electoral efforts.

Prince already had knowledge of Israeli private intelligence companies through Dorian Barak. Several years ago, Prince was offered a financial stake when he was then an emerging company called Black Cube, run by former Mossad officers. The company gained a bad reputation during the MeToo movement when a company representing the notorious Hollywood producer Harvey Weinstein named Black Cub to help stop the publication of a report on his sexual abuse.

Inspired by his beliefs about reshaping the Middle East and Afghanistan and his new status as an unofficial adviser to the next US president, Prince was invited to a meeting of MbZ’s entourage in Seychelles, according to the report.