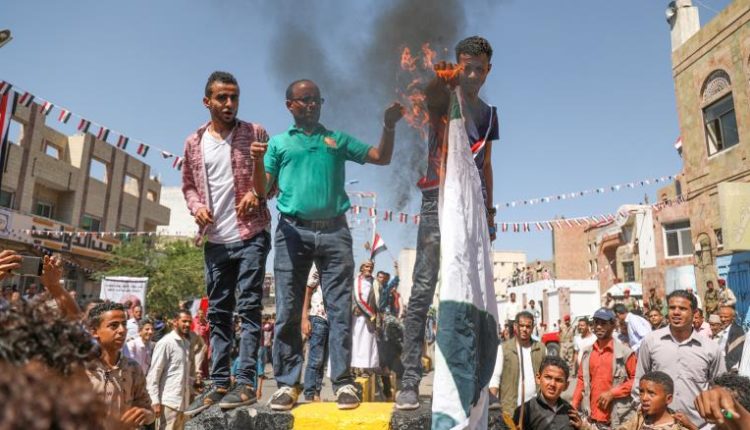 Within its four-year war against Yemen, leaving tens of thousands dead and wounded, the UAE is pushing armed militias that undermine the authority of the Yemeni army and working to weaken it to serve Abu Dhabi’s criminal ambitions.

The clashes in the city of Taiz between forces of the Yemeni National Army and gunmen described by the local authorities of the city outlawed, resulting in the deaths and injuries of civilians as a result of these clashes and damaged several houses, in clashes is the heaviest since the expulsion of the Houthi group from the province.

Witnesses and local sources said the clashes were concentrated in the center of the old city and near the huge school, which is a military barracks and a weapon store for Abu Abbas group backed by the UAE.

A security source in the Taiz police in southern Yemen that the security campaign retreated from the sites regained from elements described by the outlaws.

The same source said that the campaign withdrew from these sites after the commitment to the cease-fire in accordance with the directives of the governor, pending the implementation of the three demands contained in the directives of the governor of Taiz to hand over the required elements to the authorities and the withdrawal of militants from the city and the removal of the new military points.

The security campaign has a popular cover due to the security chaos that prevailed in the province during the past years. Taiz was divided into security squares between the national army and armed militias, most notably the Abu Abbas militia.

The Yemeni government aims to control those described as armed groups accused of assassinations of soldiers and officers in the national army, the last of which was the assassination of a commander of the 22nd mechanized brigade last Monday.

It is noteworthy that the National Army and resistance regained, in late 2016, control of Taiz from the Houthi group, but once the expulsion of the Houthis from the province, Taiz entered into a cycle of violence again called the security chaos and assassinations, as it witnessed a series of assassinations of more than 200 deaths of leaders in the army and popular resistance and politicians And activists.

Abu al-Abbas’s UAE militia is the first suspect, for many parties inside Yemen, to stand behind the assassinations and to spread the security chaos in Taiz.

A British sues UAE for torture after arbitrary arrest

Emirates uses airport in Yemen as a military base