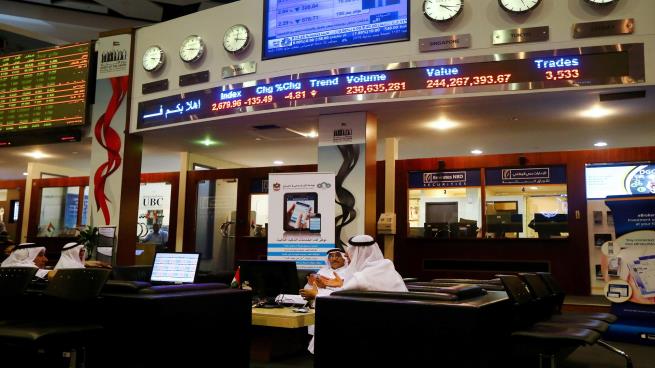 The stock markets in the UAE suffered severe losses in a week after Abu Dhabi and Dubai shares lost about AED 38.4 billion ($ 10.45 billion).

This comes as the investors, who rushed to random and extensive sales, after the announcement by the UAE Ministry of Foreign Affairs and International Cooperation on Sunday that four merchant ships of several nationalities were subjected to acts of sabotage near the state’s territorial waters near the Emirate of Fujairah. Saudi Energy Minister Khalid Al-Falih revealed that two Saudi oil tankers were attacked in the UAE’s territorial waters.

Observers said that despite the intervention of government institutions in Saudi Arabia and the UAE specifically to curb the decline of shares and the slide of indicators during the last two sessions of last weekend, but the indices closed down on the decline due to heavy losses in the previous three sessions.

Observers said that fear dominated the investors, war warnings driven many to sell their shares and exit markets under these difficult circumstances. The losses will be huge if there was a war between the United States and Iran. Saudi Arabia and the UAE will pay a heavy price for this war and its consequences, and other Gulf markets will have a share of losses.

Current tensions in the Gulf region have given investors additional concerns after the US decision earlier this May to raise tariffs on Chinese products in the global financial markets, especially emerging ones, which will be hardest hit by global business growth if there was a war between the two largest economies in the world.

Damac Properties fell 3 percent, recovering from some of its early losses. On May 15, the company posted its lowest profit since its IPO in 2015.

Arabtec Holding lost its daily maximum of 10 percent after construction company reported a half-year drop in first-quarter profit last week and the departure of its chief executive.

Ramadan breakfast for Israeli Jews at the UAE Embassy in Italy