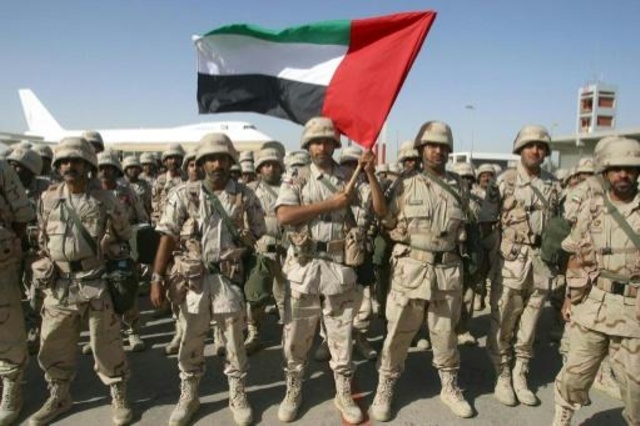 The internationally recognized Yemeni government has confronted a new plot for the United Arab Emirates on the island of Socotra by squeezing an arms shipment aimed at supporting the Abu Dhabi militia.

A Yemeni source close to the security forces on the island of Socotra revealed seizing an Emirati ship, after the ship crew refused to allow inspecting it, as it was suspected to carry weapons and military equipment, as reinforcements of a loyal force within the Yemeni island.

The source, who is close to the government authority said that a UAE ship arrived a few days ago to the port of Hulaf on the island of Socotra, located in the Indian Ocean off the southern coast of Yemen, suspended by the authorities after the refusal to search.

He added that when it was time to unload the ship’s cargo at the dock, the port administration requested a schedule of the shipment on board, according to the laws in force in the ports.

According to the source, the cargo of the UAE ship containers closed, but the request of the administration of the port of Socotra was rejected by the Emiratis.

He pointed out that the Emiratis tried to circumvent the administration of the port, and revealed part of that shipment, which includes “police vehicles,” which estimated at 10. Stressing that these cars or police vehicles were handed over to the police chief of the island.

According to the source close to the Socotra authorities, the vehicles delivered to the island police chief were merely a “bait”, so that they could enter the other cargo containing “military vehicles and dangerous weapons” they intended to transfer to the headquarters of the Emiratis surrounded by security guards there.

The UAE headquarters is located next to the Al-Asmal plant in the island, with an area of 2 km, the source said.

He explained that the Director of the Department of Socotra Port is committed to the decision to inspect the containers on board the ship, and to obtain the list of the composition of the load, otherwise, it will stop the process of unloading final, which happened.

The decision of the port official was rejected by the crew of the UAE ship, which raised suspicions about the cargo on board, the source said.

The Yemeni source confirmed that the governor of Socotra Ramzi Mahrous ordered the local police chief to stop the unloading process unless the administration of the port of Holaf was handed over the cargo table and the shipment was comprehensively inspected, as is the case for all ships coming to the island.

The source pointed out that, after the decision of the authorities in Socotra, the UAE delegate arrived at the island, Abu Mubarak Al Mazrouei, who is a representative of the Khalifa Foundation for Humanitarian Affairs, accompanied by his deputy Abu Yusuf, to negotiate with local authorities.

But the attempts of the two men failed, and the governor and the director of the port of Socotra refused to negotiate with them.

The source said that the decision of the authorities of Socotra and its harbor was shocking to the Emiratis, who used to unload and remove their ships without any inspection, on the pretext that it is military secrets, and it is an alliance.

The Yemeni source, from inside the island, announced the intensive UAE moves inside Socotra to respond to the governor’s decision regarding the cargo of the ship. It began with its allies in preparing a propaganda campaign against the local authority, accusing it of hindering the development of the island, and review the activities they have undertaken for their children.

The first batch of Socotri youth, the second force in the Saudi-led military alliance, arrived in the port city of Aden earlier this month after receiving military training at Gulf state-run camps for their allies there in the coastal city for years.

It is believed that the weapons on board the UAE ship reinforcements that Abu Dhabi is trying to enforce despite the Socotra authorities.

A few days ago, the governor of Socotra warned, for the third time, that he would not allow the establishment of a security belt or unofficial forces and was working on a suspicious agenda.

In February and April, the governor of Socotra declared his rejection of any armed formations outside the state, but their arrival is a clear challenge to him.

Ramzi Mahrous was faced with a difficult task, with the renewal of the UAE’s disputed activities and the fragility of official support after the dismissal of President Hadi Ahmed Obaid Bin Dagher, who emerged as a “strong target,” according to observers, against the plans and policies of UAE hegemony in the country.

Last March, the UAE was discovered to have built a seafront near the port of Holaf in Socotra, before being stopped. However, Abu Dhabi has retreated under intense pressure and has turned the project into a “breakwater.”