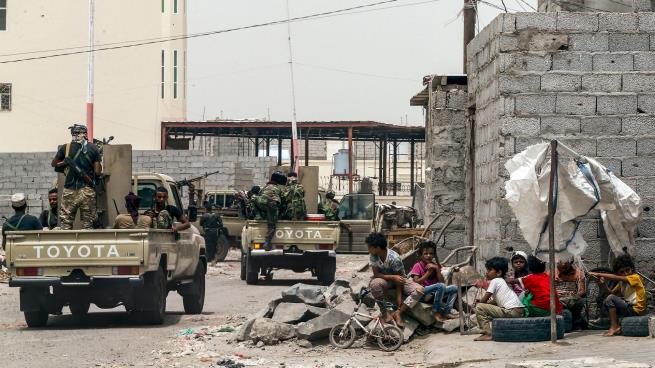 Violations of torture, abuse and medical negligence against detainees continue in a prison run by UAE militias in Yemen.

The southern Yemeni city of Aden witnessed a protest for relatives of detainees and enforced disappearances in prisons under UAE-backed forces demanding the release of the prisoners.

The participants, mostly women, gathered near the headquarters of the Ministry of Human Rights and in front of the Yemeni Interior Minister, Ahmed al-Meissari, home and raised banners calling for the release of detainees and photographs of the victims of forced disappearance.

The participants in the stand called by the Association of Detainees’ Mothers condemned statements made by Deputy Interior Minister Gen. Ali Nasser Lakhma, who recently said that all prisons in the south of the country are official.

UAE-backed forces have arrested dozens of Yemenis, some of whom are still unaccounted for, while others have been on hunger strike for weeks in Bir Ahmad prison in Aden demanding their release.

The issue of prisons established by the UAE and its affiliated forces in the southern regions of Yemen has become well known in recent years, in the light of human rights reports pointing to widespread abuses and brutal torture of prisoners.

Recently, a statement attributed to the hunger strikers in Aden revealed the names of 23 prisoners who had been neutralized in these prisons. And there was no immediate official comment from the Yemeni or UAE government authorities.

The banners carried by the prisoners showed that they will continue their hunger strike even if they died if the authorities did not acknowledge their demands to resolve their cases, bring them to fair trials, and immediately release those who had not been charged.

Prisoners who went on hunger strike sewed their mouths, according to the pictures that were circulated on social networking sites, to protest against what they suffer from.

Detainees in the Burr Ahmad prison, under the security forces under the UAE, are on hunger strike for the 15th consecutive day, according to a human rights source.

The source said that the prisoners, without specifying their number, stopped eating, but they only drink water and salt, in protest against exceeding the legal period without investigation or trial.

“prisoners staged a protest inside their prison, where they raised slogans such as 20 cases of fainting because of hunger, who is responsible?! The criminal prosecution is killing us slowly, fifteen days of strike and no response, your children are dying in prison, for how long will you stay silent?” according to the same source.

The same source pointed out that “the hard conditions the detainees suffer from, the inhuman practices that they are subjected to in prison, and not being investigated or brought to trial, forced them to launch the hunger strike.”

This is not the first time the prisoners of Bear Ahmed have to carry out an open hunger strike. They carried out similar activities at different times in the year 2018, in protest against the failure of executing the prosecution’s orders to release them immediately.

In mid-September 2018, the prison administration released 12 detainees who had been detained for nearly two years on various charges. And 29 prisoners had been released after international and local calls and human rights demands for their release because they were arrested without any legal pretext.

Officials from the Yemeni Prison Service of Interior Ministry visited the prison in mid-July 2018. They met the detainees and pledged to release those who have release orders from the Public Prosecution, but some of them are still in detention.

The prison is being run by security forces affiliated to UAE. The prisoners sent a letter a few days ago saying that there were 18 cases of fainting because of the hunger strike, pointing out that they hold the criminal prosecution responsible for their lives because they did not do their duty towards them.

The families of the detainees and those who were forcibly disappeared in the governorate of Aden have held the legitimate authorities and the UAE-Saudi coalition forces full responsibility for the persecution and torture of their relatives in the custody of the coalition forces in Aden.

The participants in the protest at Caltech’s Directorate of Mansoura in Aden stressed the need for the immediate release of detainees and the disclose of the whereabouts of those who were forcedly disappeared.

The Committee of Families of Detainees and Disappeared in Aden stressed that they will continue to escalate their protests in the coming days. In the summer of 2017, an investigation by the Associated Press revealed that there is a network of secret prisons in Yemen run by the UAE, and detainees are subjected in which to various types of torture.