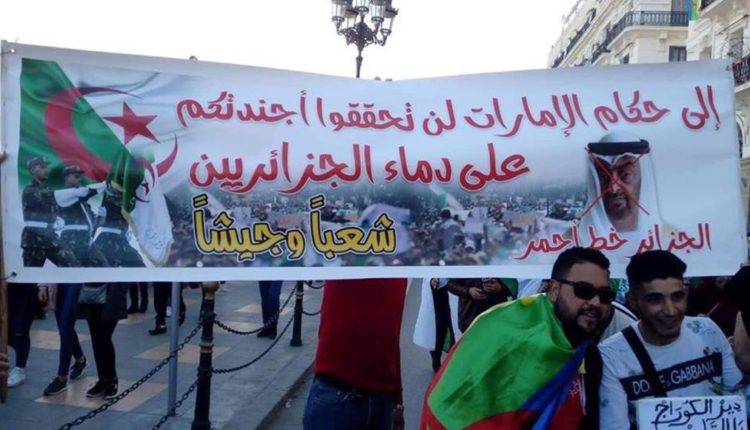 Algerian activists have called on Emiratis again to stay away from Algerian affairs and not to interfere with their movement to remove all symbols of the regime.

Among the slogans raised by Algerian demonstrators on the seventh Friday of the movement, journalists who covered these protests documented slogans against the UAE, and denounced the interference in the affairs of their country.

The protesters carried signs reading “Down with the UAE” and “No to the UAE in the country of martyrs” along with other banners attacking France as well.

Although the UAE has not officially declared a position on what is going on in Algeria, its media outlets expressed support for these protests.

Some writers and critics, who express the official position of the UAE, appeared more joyful in Algeria’s protests than the other Arab countries, which raised fears among Algerian activists.

The agency also reported on the same date of a meeting between Sheikh Mansour bin Zayed Al Nahyan, Deputy Prime Minister and Minister of Presidential Affairs, with General Ahmed Kayed Saleh and his accompanying delegation on the sidelines of the exhibition “Idix 2019.”

The meeting, which was held on the 18th of last month, discussed the cooperation relations between the UAE and the Republic of Algeria, the ways to enhance them and develop them in various fields, in addition to exchanging views on a number of issues of common concern.

Tips by UAE for Demonstrators

“Algeria is now in the spotlight and the greatest witness to the people’s free will to express their displeasure at the obstruction of hope in a safe, free and dignified life,” said adviser Abdel Khaliq Abdallah in an article on CNN.

He added that President Bouteflika’s insistence on running for a fifth term had “inflamed Algerians’ anger” and would push Algeria to “the unknown.”

He said that Algerian protesters should face “the anger of power centers threatened by the Chief of Staff Ahmed Kayed Saleh that he will not allow the return of Algeria to the years of embers.”

The relations between Algeria and the UAE have deteriorated in recent periods on the grounds of the differences in many files and issues, most importantly the relationship with the Islamic movements and the Gulf crisis and ways to deal with the Libyan file and other issues that extended the apartment between the country of one million martyrs and “Ayed Zayed.”

More than a year ago, tensions broke out soon after being contained, at least, after comments by the Emir of Sharjah, Sultan bin Mohammed Al-Qasimi, claiming that the independence of Algeria was because France wanted to please the Egyptian leader Gamal Abdel Nasser, ignoring that a million Algerian died to get their independence.

Al-Qasimi’s statements were met with widespread rejection and condemnation from the Algerians who saw it as a deliberate insult to their country, and perhaps its shadow was present in the slogans of the Algerian protesters such as “Down with the UAE”, in addition to their slogan against Bouteflika.

While oil is the gateway to an ever-present crisis between Algeria and Saudi Arabia, dealing with the Islamic movements represent another gateway to a discordant Algerian-Emirati dispute.

The head of the Movement of Society for Peace, Abdul Razzaq Makri, said in a recent statement that Riyadh and Abu Dhabi are always working against the interests of his party and trying to prevent him from reaching the power, stressing that the immunity of his party derives from the inside and the confidence of his fans.

While many Algerians hope their peaceful protest will be a new, more democratic and progressive version, they fear that the fingers of the UAE are secretly planning to bring the country of one million martyrs to its list of states that are involved in its policies and orientations Algeria after Bouteflika.