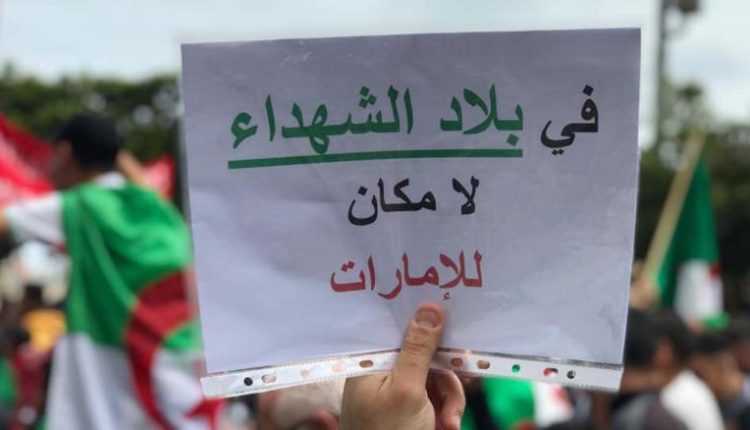 Increasing rejection of the UAE ruling regime interference and its allies, Saudi Arabia and Egypt, reveals an unprecedented development in the Arab people’s awareness.

With the outbreak of the second Arab Spring in Sudan and Algeria, the popular attitude of rejecting the interventions of the UAE and its allies has become increasingly visible through economic aid that paves the way for a sabotaging role led by Abu Dhabi in support of the counterrevolution.

Observers confirm that the people who moved or will move at this time against their leaders are well aware of what happened in countries that have experienced counter-revolutions. They know that accepting the Syrian revolution of the Saudi and Emirati support was a grave mistake.

These peoples know very well that Saudi Arabia or the UAE was not against Bashar Al-Asad as much as they were against his relations with Iran.

A proverb says “A believer doesn’t get stung twice from the same hole.” What we see now in Sudan and Algeria reflects great awareness of the two countries peoples against the attempts of other countries to obliterate their revolution. Even the regimes that are not allied to Algeria or Sudan from the region don’t wish the success of the people in the region to control her fate. Because that threatens them as well.

Although peoples benefit from past experiences, caution is required only from common factors among all revolutions. The most important thing is not to drag people into violence. Perhaps this is the right path taken by the Algerian and Sudanese uprisings. However, I tend to say that the Sudanese army is running a representative scene that the people are still watching.

Morocco is also one of the countries that have occasional protests, but it often does not move to another region of Morocco, making it easy to the stat to finish it. Morocco is not different from the countries of the region, and the class friction has reached a high level. The basic rule of any future movement is consciousness, in addition to the awareness of the demands and their compatibility with the conditions of the people, in order to ensure the silence of the least hesitant, and not to make mistakes as getting in the race.

If the Sudanese people were engaged in a policy of dispersing the sheep and the latest division between the army and security, which led the army to overthrow Omar al-Bashir, Moroccans could also benefit from this strategy.

The rule in Morocco is not military. It is an executive Royalty. Many Moroccans, if they talk about change, they talk about people around the king, not about the king himself, and the people can use their legitimacy directly with the king.

The Moroccan people know that these parties have no role but to rush to positions and make Morocco home for them and their children.

It is time for Moroccans to say enough, a demand that must be directed directly to the king. The time has come for the Moroccans to demand the king to dissolve all the parties, hold the public funds accountable, form an independent judiciary in which the word of justice is the highest and ending with the policy of nepotism.

If it is fate on any people to live in poverty, no problem. But people must live equally in the same conditions. It is not reasonable that a small class lives in the country’s wealth, and take everything and leave the people with nothing! Where is justice in a country full of wealth, while most of the youth are concentrated on immigration.

The Arab popular rejection of the UAE interventions is the surest way to ensure the success of the demands of freedom and change and the elimination of regimes against dictatorial regimes. Otherwise, the counter-revolutionary approach led by Abu Dhabi could once again dominate the aspirations of the Arab peoples.

International events… the UAE gateway to normalize with Israel