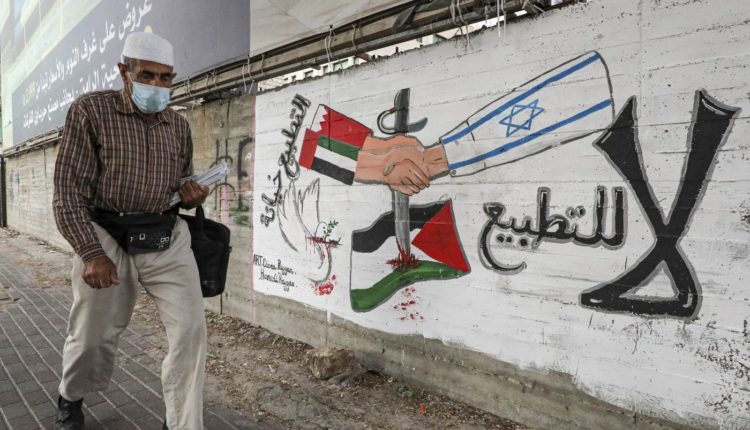 Palestinian rights advocates condemned a visit by Israeli settlers to the United Arab Emirates, which they said confirmed concerns that Abu Dhabi’s normalisation deal with the Israeli government strengthens the occupation and dispossession of Palestinian land.

The trip, led by outspoken annexation advocate Yossi Dagan, who heads a council for illegal Israeli settlements in the occupied West Bank, concluded earlier this week. Dagan revealed in a Facebook post on Tuesday that direct trade between settlements and the UAE will start soon.

He said settlement representatives held a “marathon” of business meetings in Dubai.

Khalil Jahshan, executive director of the Arab Center Washington DC, a think-tank, said the visit proved that the recent deals between Israel and Arab countries were meant to normalise Israeli “excesses”, not Israel’s existence as a state in the region.

“There’s no better word to describe it other than the Yiddish word ‘chutzpah’,” Jahshan told MEE, referring to a term that can be translated as shameless audacity.

“Now you have Arab partners to Israel seeking to legitimise that illegal aspect of Israeli policy.”

He added that settlements are the “antithesis of peace”.

The UAE and Israel signed a normalisation agreement touted as a “peace deal” brokered by the Trump administration earlier this year, vowing to increase economic and security cooperation and establish diplomatic relations for the first time.

The deal was announced by the White House in August in a statement saying that Israel would “suspend declaring sovereignty” over large parts of the West Bank as previously planned by the government of premier Benjamin Netanyahu.

Emirati officials repeatedly credited the pact after it was signed for what they called saving the two-state solution by halting annexation. Still, Netanyahu has continued to stress that annexation is still on the table.

Dagan, the settler leader, made a call for annexation after his trip to the UAE, saying that ties with the UAE would help make northern West Bank settlements an “engine” of growth for the Israeli economy.

“Most of the citizens of Israel, myself included, continue to… demand that Prime Minister Netanyahu apply full sovereignty to Judea and Samaria,” he wrote using the biblical name of the West Bank.

The Associated Press first reported on Dagan’s visit on Wednesday, sparking outrage from Palestinian rights advocates and proponents of the two-state solution.

“As many of us have argued from the start, Arab Gulf states’ normalization with Israel is not about normalizing bilateral ties as much as they’re about normalizing Israeli occupation & the settlements,” Khaled Elgindy, a political analyst and author on the conflict, wrote on Twitter.

Zeina Ashrawi Hutchison, a Palestinian-American activist, said the settlers’ visit and the prospect of direct trade between the UAE and the settlements make Abu Dhabi “complicit” in Israeli abuses against Palestinians.

“The UAE normalising with Israel at the expense of Palestinian rights, backstabbing the Palestinian cause and selling Palestinian freedom for a shred of a share in the military-industrial complex is all hugely problematic for so many reasons,” Ashrawi Hutchison told MEE, referring also to Emirati efforts to acquire F-35 fighter jets from the US.

“But to also specifically have talks with, invest in and legitimise Zionist colonial settlements makes the UAE government spineless and complicit in Israeli war crimes against the Palestinian people.”

Israeli settlements are illegal according to international law, which prohibits occupying powers from transferring their civilian population into areas under their military control.

Israel captured the West Bank during the 1967 war.

Since then, successive Israeli governments have been building settlements in the Palestinian territories that now house more than 600,000 Israelis who enjoy the full rights of Israeli citizens while living outside of the country’s internationally recognised borders.

Late in 2016, the UN Security Council passed a resolution calling the Israeli settlements in the West Bank and East Jerusalem a ” flagrant violation under international law”.

Over the past four years, US President Donald Trump has strayed away from the long-standing international norms of questioning the validity of settlements and Israel’s full control over Jerusalem.

The Trump administration has moved the US embassy to Jerusalem, revised its policy that considers settlements illegal and presented a plan for the conflict that would allow Israel to annex all of its West Bank settlements.

Axios reported on Thursday that Secretary of State Mike Pompeo plans to visit an Israeli settlement during his trip to Israel next week, breaking with decades of American policy.

Despite these moves, the UAE and Bahrain appeared to reward Trump and Israel with normalisation deals ahead of the US election.

Jahshan said despite President-elect Joe Biden’s support for Israel, Washington’s priorities in the region may shift away from normalisation between Arab countries and Israel once the new administration takes office on 20 January.

He predicted that a Biden administration would welcome normalisation efforts without applying the kind of pressure that Trump and his top aides did.

“You have to be stupid as an Arab leader to come and normalise when nobody’s asking you to normalise. You don’t need to,” Jahshan said.

By Ali Harb for the Middle East Eye