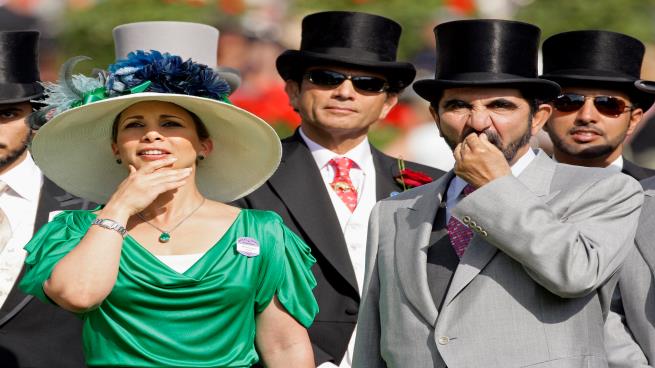 Jordan’s Princess Haya bint al-Hussein, the wife of Dubai’s ruler Mohammed bin Rashid, has turned to Britain for diplomatic immunity, apparently out of fear of his oppression.

Princess Haya, 45, the half-sister of Jordan’s King Abdullah II, has held a senior diplomatic post at her country’s embassy in Britain.

According to the Times newspaper, the list of diplomats published by the British Foreign Office confirms Princess Haya’s appointment as first secretary at the Jordanian embassy.

The move comes in the midst of a heated court battle with Princess Haya and her husband, Mohammed bin Rashid, who are in a stronger position to be British citizenship and enjoy diplomatic immunity.

This means transitional protection for Princess Haya on British soil and her two sons from her husband, Mohammed bin Rashid, who previously threatened to bring her to the UAE by force.

In May, Princess Haya fled to Germany and then to Britain, after she and her two children fled from Dubai, where she said she did not intend to return to Dubai to get rid of her husband’s life.

The princess filed a petition to Britain’s High Court on July 30 to “not be subjected”, which protects against harassment or threats, and also filed a legal guardianship request, which means placing a child under the court’s authority over important decisions.

On October 8, Princess Haya appeared before the High Court in London in the latest round of legal battle with her husband over the care of their children.

A full hearing of the case between the ruler of Dubai and Princess Haya will be held on the 11th of this month and is expected to last five days. Princess Haya attended the initial session while Sheikh Mohammed was absent. David Panick, one of Britain’s biggest lawyers, was on his behalf.

The judge told reporters they could say the initial hearing took place on Tuesday, but they could not disclose details of the legal proceedings.

Mohammed bin Rashid, 70, who is also vice president, married the princess who was a member of the International Olympic Committee in 2004 in what was believed to be his sixth marriage. Sheikh Mohammed had more than 20 children from different marriages.

In the past months, foreign media have been buzzing with the news of Princess Haya’s escape and her asylum request in Germany with her venerable 11-year-old daughter and Zaid, 7.

The princess, who has a degree from Oxford University, said she chose to flee to Europe because she did not trust the UAE government would protect her.

The British government has come under pressure from the United Arab Emirates to bring Princess Haya back to Dubai, but she has not responded.

US State Department Strong criticism of UAE: a station for terrorist organizations