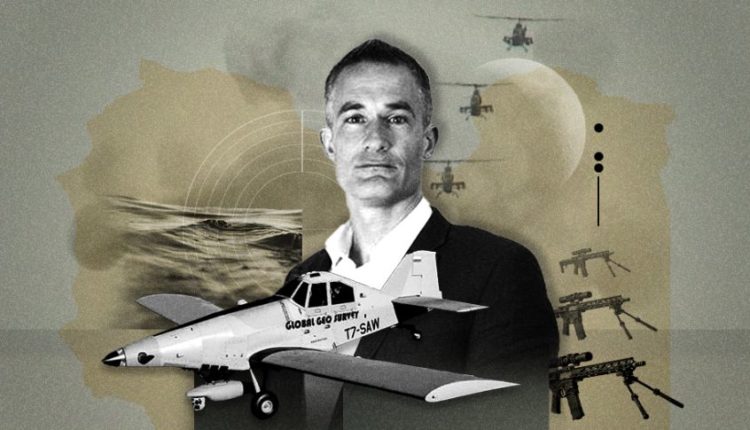 The fighter pilot, the mercenary boss and the warlord: A modern war story

When Christiaan Durrant was four years old his father strapped him to his back and launched them both from an ocean cliff in a homemade hang glider fashioned from tarpaulin, electrical tubes and aluminium piping.

Amazingly, the pair made it back to earth without mishap and Durrant’s lifelong obsession with the sky — and with adrenalin-fuelled risk — was born.

It was an obsession that would ultimately place him in the crosshairs of a UN investigation, accused of planning a secret operation to provide a Libyan warlord with aircraft, weapons and soldiers to help overthrow the internationally recognised government of Libya. By 22, Durrant was a fighter pilot with the Australian Air Force. By 28, he had topped the class in one of the most difficult fighter pilot classes in the Australian military — the Fighter Combat Instructor, or FCI, course — equivalent to America’s Top Gun Navy pilot program.

Along with his growing skills, however, was a growing sense of frustration with the military and its bureaucracy.

“I’d started to lose a bit of faith … I just felt there was a lot of politics getting involved and senior bureaucrats getting involved that was eroding the force from what it was asked to do — to defend the country. And I couldn’t work in that environment — it clashed too much with my own personality,” he recalled in an interview with ABC radio.

He quit the Air Force in 2004. Over the next decade he tried various civilian careers: he flew jumbos for Qantas, was a Canberra military aviation consultant, started a tourism business in Tasmania, and even ran a farm. None stuck.

Durrant wrote about his thirst for action in his 2012 autobiography, Fighter Pilot.

“There is a monkey on your back … He only eats danger, excitement and impossible feats. If he is not fed, he will whisper in your ear how little you are worth,” he said.

“To satisfy that monkey you will have to do things that are not entirely sane, nor conducive to a long life nor a happy family. You are a slave to the monkey.” Keeping that monkey fed was how Durrant allegedly ended up setting up a private military project for a Libyan warlord.

Four Corners can reveal that the United Nations is investigating Durrant’s alleged role — and that of two other Australian military men — in the Libyan operation. The UN alleges the mission breached an arms embargo designed to stop the violence that has plagued the Middle Eastern nation since the overthrow of dictator Muammar Gaddafi in 2011.

“It is exceptionally serious that former Australian military are applying the skills that have been granted to them by our community and our government for potentially criminal, certainly immoral things,” he said.

The 2019 operation was put together by a shadowy group of mercenaries and businesspeople calling themselves Opus.

According to the UN, which has gathered 140 pages of damning evidence across two ground-breaking reports, it was designed to provide military support to General Khalifa Haftar, who controls the self-styled Libyan Arab Armed Forces, which has been fighting for years to overthrow the country’s recognised government.

The Opus operation is laid out in two documents: a PowerPoint presentation and a secret situation report, or sitrep. Both are revealed here for the first time.

In the sitrep, the Opus team advises it: “can be effective within seven days … with export of controlled items including helicopters, air ammunition, ground weapons, ground ammunition, and night vision.”

“Opus will continue their aggressive deployment program [to] support the commander’s strategic intent,” it concluded. UN investigators believe General Haftar is “the commander”. In cold, business-like language the PowerPoint pitched a plan for armed helicopters and a team of Western ex-military men who would act as Haftar’s special forces.

It also included a hit list of nine Libyans the Opus team was apparently offering to kill or kidnap for Haftar.

One of the people has the term DNT — Do Not Terminate — next to his name.

The document is full of US military terms for targeted killings and kidnappings.

On one page it refers to the provision of an “HVT Extraction/Termination” unit: HVT stands for High Value Targets. Elsewhere, it includes the term F3, which stands for Find, Fix, Finish – a term for targeting and killing or capturing important enemies.

“You are being told to find, locate, and murder people,” said US conflict journalist Robert Young Pelton, who has spoken with people involved in the operation.

Haftar accepted the proposal, which UN investigators believe was worth as much as US$80 million, and within two months helicopters and planes started arriving in Amman, Jordan. According to UN investigators on June 14 last year Durrant landed in Amman to oversee the shipment of the helicopters, planes, and a group of about 20 mainly ex-military men from South Africa, the UK, the US, and Australia, into Libya for the Haftar operation.

He was also there to take receipt of two Cobra attack helicopters and five “Little Bird” special forces helicopters from the Jordanian military, which was selling them on the open market, according to UN investigators.

Jordanian authorities were becoming suspicious of the project and sent a representative to meet with Durrant.

It did not go well. Durrant introduced himself as Gene Rynack, a slight misspelling of the name of Mel Gibson’s devil-may-care CIA contractor pilot in the movie, Air America.

“Durrant purported to the Jordanian authorities that the operation had clearances from ‘everywhere’,” the UN investigators stated in a report. The Jordanians established that was not true.

Within days the Jordanian Armed Forces headquarters cancelled the sale of the attack helicopters and the departure clearances for the planes and men that were about to deploy to Libya, the UN found.

UN investigators believe Durrant and the others behind Opus were forced to buy half-a-dozen ex-military helicopters in South Africa and have them shipped across the continent. Durrant left Amman for his home in the United Arab Emirates.

The contractors arranged a private flight and, on or about June 27, 20 mercenaries landed in Haftar’s eastern Libyan headquarters — Benghazi.

The 20 men were paid about $US80,000 each for what was to be a three-month job. In the end, they only lasted a few days in the war-torn nation.

When they arrived, three of the mercenaries went to visit Haftar to discuss the operation. The mercurial warlord noted they were arriving without the military helicopters promised in the PowerPoint.

“The General not seeing all his fancy gunships that he had paid for, was furious,” said Pelton, the journalist who had the scene described to him by a person involved.

“The General said, ‘I paid $80 million, where’s my stuff?’ And there were threats made against Durrant’s life, personally by the General,” Pelton was told.

It became clear to the mercenaries that the plan was falling apart. Several nights later, fearing for their safety, they drove to a Benghazi dock and fled on two inflatable boats.

One of the boats broke down soon after leaving and all 20 men had to pile into one small boat for a 350 nautical mile, overnight journey across the Mediterranean to safe harbour in Malta. When they arrived in the Maltese capital, Valletta, the mercenaries were questioned by Maltese police. They said they were in Libya as part of an oil and gas survey and had hastily evacuated because it became too dangerous.

They were released without charge and spent the night at a resort before leaving the island on international flights.

Durrant declined an interview but told Four Corners in a statement that neither he nor the men that went into Libya were involved in providing military support to Haftar.

“We don’t breach sanctions; we don’t deliver military services, we don’t carry guns, and we are not mercenaries,” he said. The UN was relying on “false documents” to accuse him of involvement, he told Four Corners.

“Some of your questions and previous reporting by others is built on dodgy investigations by the UN, influenced by a political agenda that goes way beyond me, and continues to be false and disappointing,” he stated.

UN reports into the alleged operation assert that the evidence is established beyond a reasonable doubt that the operation occurred. Investigators also state they are “convinced of the veracity” of the documents on which they rely.

UN investigators assert that Durrant was one of the organisers of the operation and has breached the UN arms embargo.

Durrant was “at least, complicit in the planning and execution of a military operation in support of an armed group in Libya,” according to their most recent report

One of the people the UN is looking at in relation to the case is an American friend of Durrant’s: Erik Prince. Prince is one of the world’s most high-profile and notorious mercenary bosses.

The youngest child of a Michigan auto parts billionaire, Prince briefly served as a US Navy SEAL before creating private military company Blackwater in the late 1990s. The company became one of the biggest providers of private military services to the US Government during the Iraq war.

Robert Young Pelton embedded with Blackwater in Iraq and spent time with Prince. He recalls that even as the company was making hundreds of millions guarding US diplomats, Prince had a bolder ambition.

“He talked to me about his dream of what he called an army in a box: a private army of about 1,400 to 1,700 men with intelligence, combat capability, marine, aviation and land forces that would be dropped into places like Rwanda, Darfur, and put down uprisings,” he said.

“He wanted different nations to purchase his rapid reaction force, to bring peace, in his mind, to unstable nations.”

Prince left the US and began selling his army in a box to warlords and despots around the globe.

By early 2014 Durrant was working for Erik Prince as an aviation specialist at the American’s new company, Frontier Services Group.

While working for the company, Durrant was secretly helping Prince weaponise two Thrush crop dusters so they could be used as attack aircraft.

The Thrush project was exposed by Matthew Cole and a colleague at The Intercept.

“Durrant is an employee of Erik Prince — that may not be in the legal sense, because I think that they’ve gone to great efforts to, on paper, separate that relationship,” said Cole.

“But for people who know them and know how they work together there’s no question that Prince employs Durrant.”

In his statement, Durrant acknowledged that he remained friends with Prince but said he has “no business or financial relationship with him”. So far, the UN investigation into the Libyan operation has found that two companies and five people breached the UN arms embargo. One of them is Durrant.

People found in breach of the arms embargo can face a variety of UN sanctions, including a ban on travel and freezing of their assets.

Four Corners can also reveal the Australian Government has received both UN reports and is aware of the alleged roles of Durrant and the two other Australians in the operation.

In a statement to Four Corners, the Department of Foreign Affairs and Trade declined to directly comment on the investigation but noted it “works closely with its law enforcement partners to enforce sanctions laws where there is a suspected breach.”

Both the UN and the FBI are also believed to be looking at Erik Prince over his possible role overseeing Opus.

The UN Panel of Experts’ final report will be delivered by early next year and will make public its evidence regarding the alleged operation.

Being in breach of UN sanctions can also trigger serious domestic legal consequences for Australia citizens.

Durrant could face up to 10 years’ jail or $500,000 in fines if the allegations are proved in an Australian court.

On World Press Day, the UAE a state of repression