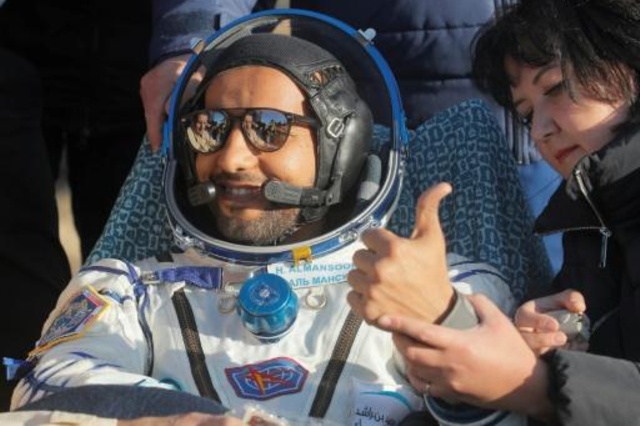 The ruling regime in the UAE is getting stuck in its internal and external crises and is trying to cover it up with propaganda campaigns, including buying a space seat for a huge sum of $75 million.

However, the news of the exposure of the scandal of payment of the said amount of money from the regime of the United Arab Emirates discontent and widespread criticism in the country suffering from a severe economic collapse.

The UAE had no astronauts just two years ago, raising questions about the amount Abu Dhabi paid to Moscow for former fighter pilot Hazza al-Mansouri to go into space.

The New York Times revealed that the price, which was not disclosed publicly for the contract concluded by the UAE with Russia.

Without having its own rockets or spacecraft, the Mohammed bin Rashid Space Center in Dubai bought a seat from the Russian space agency aboard the Soyuz in the same way that wealthy space tourists bought seats on flights to the space station, the newspaper said.

That’s why NASA refers to Mr. Hazza al-Mansouri as a “participant in space travel” rather than a professional astronaut.

It is no secret that Russia is charging $ 75 million from NASA for sending one astronaut aboard its spacecraft to the International Space Station.

For $58 million, the average tourist can take a space trip on a trip organized by private companies such as Space X and Boeing.

If the tourist wants only to reach the boundaries of the atmosphere that separates the Earth from outer space, Virgin Galactic can provide a seat on its vehicle for $250,000.

The propaganda enclosures that Hazza Al Mansoori took with him to space may shed light on the true purpose of the trip, including the UAE flag, a photo of the Emirates founder Zayed meeting with the astronauts of Apollo’s journey, and a copy of My Story by Mohammed bin Rashid.

Mansouri returned to Earth on Thursday after an eight-day mission. “The crew is doing well,” NASA said on its television channel before broadcasting scenes showing the three astronauts exiting the spacecraft.

Hazza al-Mansouri, with his hand in front of the camera, sits in a wheelchair while adapting again to the influence of gravity.

The Soyuz MS-12 spacecraft that flew them off the International Space Station at 7:36 GMT and then began landing for three and a half hours. The vehicle landed in the steppes of Kazakhstan, 150 kilometers east of the nearest city.

Mansouri has spent eight days at the International Space Station since his arrival on September 25, while Haig and Avchinen have spent 103 days at the station. Russia’s Oleg Skripochka and Jessica Mir, who accompanied him on the one-way trip, will return to Earth next spring.

Abu Dhabi Crown Prince Mohammed bin Zayed tried to promote the event and wrote on Twitter, “Thank God for the safe return of Hazza Al Mansouri to Earth after a successful trip to the International Space Station.”

Just as the United States took its historic moon-climbing achievement with a “major propaganda campaign,” the UAE is trying to emulate the same process with intense media coverage around the clock.

However, this Hollywood journey into space cannot conceal what Amnesty International has called the “evil side” of the “charming” image the UAE is trying to export.