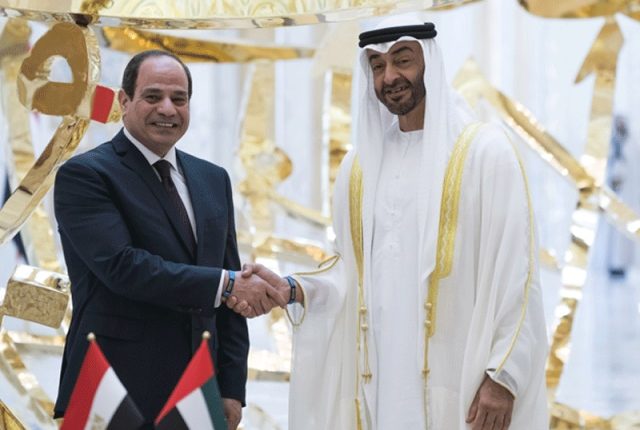 An Emirati intelligence officer revealed that Mohammed bin Zayed had proposed to the Egyptian President Abdel Fattah Al-Sisi to help him stop the escalating popular demonstrations against him.

The Twitter account “No Shadow”, run by an Emirati intelligence officer, wrote on Twitter that Mohammed bin Zayed was urging Abdel Fattah Al-Sisi to kill members of the Ministry of the Interior in an orchestrated security operation and blame the Muslim Brotherhood.

He added that bin Zayed asked Sisi to activate the bombing of churches in Egypt and accuse the Muslim Brotherhood, in order to find a justification for suppressing the demonstrations.

Emirates Leaks learned that the Emirati regime is in a state of alert, fearing the fall of its ally, Sisi, in light of the unprecedented popular demonstrations against his rule.

Mohammed bin Zayed issued instructions to inform the state to remain silent about what is happening in Egypt until the scene becomes clear.

At the same time, bin Zayed ordered his security services to coordinate with the Egyptian intelligence to try to get Sisi out of his crisis, behind fears in Abu Dhabi of splits in the Egyptian army officials, threatening the army to declare a counter-stance against Sisi.

Bin Zayed fears the failure of his most significant achievement in leading the anti-revolutions of the Arab Spring, which were represented in the overthrow of the first civilian president in Egypt, Mohamed Morsi, in mid-2013 and enabling Sisi to seize power through a military coup.

Bin Zayed had telephoned Al-Sisi on Monday evening, in light of the escalating popular demonstrations taking place in Egypt against the ruling regime loyal to the UAE and Saudi Arabia.

The spokesman for the Egyptian presidency, Bassam Rady, stated that Sisi received a call from Mohammed bin Zayed on Monday evening, during which he “reviewed some of the issues of bilateral cooperation relations between the two countries and ways to strengthen them, and the prospects for further developing this cooperation in a way that serves the common interests of the two brotherly countries and peoples.”

Radi added that Sisi and Bin Zayed exchanged “views on developments in regional and international issues of common interest, within the framework of mutual regular consultations” between them. Moreover, they discussed ways to”consolidating the distinguished fraternal relations between the two countries, which are one of the pivotal pillars for achieving security and stability in the region.”

In turn, the official Emirati “WAM” agency confirmed, in a brief statement, that the contact “dealt with brotherly relations between the two countries and ways to support and enhance them in various fields,” adding that bin Zayed and Sisi exchanged “views on current developments and a number of regional and international issues of common concern.”

US, UAE may agree on F-35 deal by December: Reuters