An instrumental cover and a Hebrew-English-Arabic mashup have caused a stir online, as cultural ties between Israel and the UAE strengthen 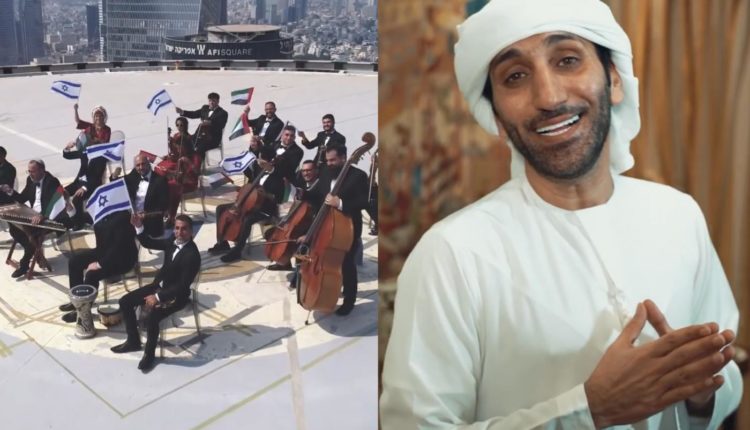 Less than two months since Israel and the United Arab Emirates announced the normalisation of diplomatic ties, brands and personalities from both countries have been quick to capitalise on opportunities to join forces.

It began with an underwear-nightwear label becoming the first Israeli brand to hold a photoshoot in the Gulf state.

Next, prominent Palestinian-Israeli influencer Nas Daily went on a normalisation tour of the UAE and strengthened his links with UAE state-funded organisations. Then an Israeli footballer became the first to sign for an Arab team, after agreeing to join Dubai’s Al-Nasr.

Now the normalisation gravy train has rolled into the music industry – and it is proving controversial.

On 15 September, the day that Israel and the UAE officially signed the normalisation deal in Washington, Israeli orchestra Firqat al-Noor released a new cover song to mark the occasion.

It wasn’t just any song, but Ahebbak (I Love You), a well-known number by renowned Emirati singer and pianist Hussain al-Jassmi.

Firqat al-Noor describes itself as an orchestra of classical Middle Eastern music, consisting of Jewish and Palestinian-Israeli musicians, with soloists who sing in both Hebrew and Arabic. The group dedicated its latest project “in honour of the hope-inspiring peace agreement” between Tel Aviv and Abu Dhabi.

The music video begins with a message from Israeli President Reuven Rivlin.

“The signing of the peace treaty… today and the upcoming treaty with Bahrain constitute a portal to a new era for the entire Middle East,” he says. “An era of peace, peace between nations, and peace between peoples.”

“Inshallah [God willing],” the president continues, “we’ll see more such achievements soon, and we’ll live in peace throughout the region, with all of our neighbours.”

Rivlin ends his introduction with Assalam aleikum, the Arabic greeting “peace be with you”.

The smartly dressed band then proceeds to walk through the streets of Tel Aviv with their instruments, board a minibus, and ascend to the roof of a high-rise building, where they perform their rendition of Jassmi’s song.

Midway through the performance, each member of the orchestra releases a white dove into the air, to signify peace. Many observers have noted in recent weeks that the so-called “peace” deal between Israel and the UAE was agreed between two countries who have never in fact been at war.

Finally, the musicians wave Emirati and Israeli flags from the rooftop, before making a dramatic slow-motion exit.

The collaboration has sparked a backlash on social media, with the cooperation of Jassmi, the prologue by Rivlin and the set location of Tel Aviv all coming under sharp criticism.

Translation: More descent towards the dirty swamp of normalisation… Hussain al-Jassmi participates in composing an Israeli song that begins with a message of thanks to the Emirates from the Israeli president in Tel Aviv for the ruins of our Palestinian villages that have been wiped off the face of the earth … You have lost and are a disgrace to us … Arabism and religion have nothing to do with the likes of you

Translation: A song by the ill-fated Zionist, Hussain al-Jassmi, and the arrangement by Ariel Cohen was filmed on the lands of the displaced Palestinian villages in occupied Jaffa, which was swallowed up by the modern Israeli city Tel Aviv. Betrayal has no limits!

Last week, UAE Minister of Culture Noura Al-Kaabi posted the video on her Twitter feed, praising Jassmi’s “beautiful piece of music… on the occasion of the peace treaty”.

The extent to which Jassmi was involved in the collaboration has proven to be a hot topic. The singer has not publicly commented on normalisation, nor has he shared Firqat al-Noor’s cover of his song. Doing either could alienate his vast fan base across the Middle East.

Some concluded that his name appearing in the credits of the video signified tacit cooperation. However, others came to Jassmi’s defence.

“An Israeli band performed an old song by Jassmi and the spokesperson for the UAE Ministry of Foreign Affairs shared it on social media. Jassmi did not participate and did not issue a position on normalisation,” a Twitter user wrote.

“In a country like the UAE, less than full obedience is unacceptable, and silence can be a revolutionary act,” they said.

Another UAE-Israel musical collaboration emerged this week, and in this instance there could be no doubt about which parties were involved.

Unlike the orchestral collaboration, this duet featured singing, dancing, and even the appearance of a snake and a camel.

Both singers jovially, and repeatedly, wish peace upon each other in the three languages, before impatiently asking: “When are you coming?”.

Ofir Gendelman, Israeli Prime Minister Benjamin Netanyahu’s spokesperson to the Arab media, said that the duet “reflects the spirit of peace between the two countries and friendship between the two peoples,” before stating: “The song is crazy.”

The track was also shared on social media by Avichay Adraee, an Israeli army spokesperson.

Despite praise in the Israeli upper echelons, the collaboration received mixed responses on Arab social media.

One Twitter user downplayed the significance of the duet, stating: “I am from the Emirates. In my life I haven’t seen or heard about an Emirati singer named Waleed al-Jassim.”

Meanwhile, the song prompted another user to analyse the difference between Egypt and Jordan’s normalisation deals with Israel, signed in 1979 and 1994 respectively, with that of the UAE.

With partnerships already forming across fashion, tourism, sport and music in a matter of just weeks, Israeli-Emirati cultural normalisation is surely set to continue.

Israel’s deals with the Gulf are a disaster for Egypt