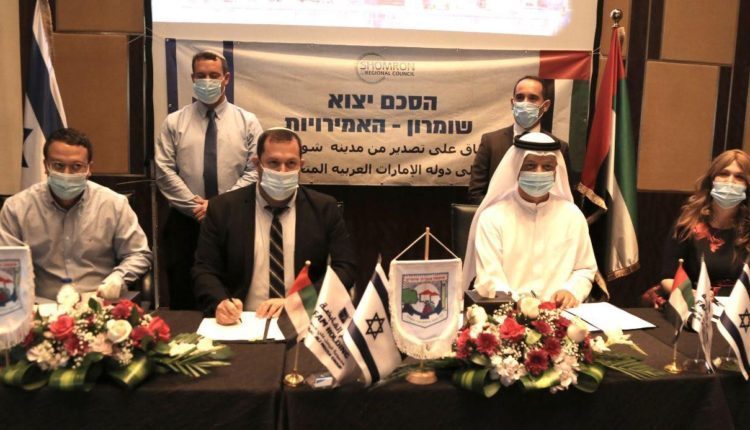 The UAE regime’s insistence on importing products from Israeli settlements threatens UAE companies to be subjected to legal prosecution and international sanctions.

Palestinian Prime Minister Muhammad Shtayyeh stated that the Palestinian side would pursue the countries that import goods produced inside the settlements, implying to the UAE.

Shtayyeh said dealing with settlements is against international law.

“Importing olive oil and honey that are made in Israeli settlements shows that these Arab countries do not realize that these settlements and dealing with them are contrary to international law.”

The move “ignores the enormity and criminality of the Israeli occupation, and neglects the injustice inflicted on the Palestinian people.

“Or the lack of awareness that these colonies and dealing with them violate international law, and expose those who carry it to criminal and legal prosecution in international courts, stressing: “We will undoubtedly do this prosecution.”

The first shipment from the settlements

Two days ago, the first shipment of products from Israeli settlements in the occupied West Bank arrived in the UAE as part of the normalization agreements for Abu Dhabi.

Israeli sources stated that the first shipment of settlement products went to Dubai.

The sources explained that the shipment includes olive oil and honey.

The first shipments were processed by a winery developed by Paradise Honey factory, with the head of the settlement council’s head Yossi Dagan.

Dagan stressed that economic cooperation with the UAE will strengthen settlements to reach the dream of “one million settlers in the West Bank.”

The UAE companies are threatened by imposing United Nations sanctions because of their dealings with Israeli settlement products.

Impact pointed out the consequences of encouraging settlement projects that cause the widespread confiscation of Palestinian lands and the deprivation of the Palestinians’ right to self-determination.

“The surge of investments began after the signing of the Abraham agreement on September 15th between the governments of Israel, the UAE, and Bahrain,” said Atavia Sane, a researcher at Impact International.

Sane added that the high rate of investment in commercial projects inside Israeli settlements is worrying.

She noted that the Emirati investments only contribute to expanding illegal Israeli settlements and violate Palestinians’ rights and independence.

Moreover, when importing goods, the UAE does not distinguish between Israeli products from illegal Israeli settlements and others.

The settlement products include wine, tahini, olive oil and honey.

This December, Dubai-based FAM Holding Company signed a deal with companies operating in Israeli settlements to export these products to the UAE.

The Emirati investments include the Abraham joint fund to finance Israeli checkpoints in the occupied West Bank.

Therefore, the UAE will directly participate in the violations that Palestinians face at checkpoints, including humiliation and systematic attacks.

Impact called on the UAE government and the UAE private sector to stop all business with companies that operate in or benefit from illegal Israeli settlements.

Under the UN Guiding Principles on Business and Human Rights, companies’ responsibility is to respect human rights and assess their activities’ impact.

Impact demanded the Commissioner to clarify to the Emirates that if it imports Israeli products.

It should abide by international humanitarian law, moving away from supporting and assisting the Israeli authorities in expanding its occupation.

The United Nations High Commissioner for Human Rights issued a list of companies and commercial entities that engage in commercial activities in Israeli settlements.

This was based on a request from the Human Rights Council, which mandated the office to issue a database for commercial companies that engage in commercial activities, in its decision issued in March 2016.

In its report, the Human Rights Office identified 112 commercial entities believed to have reasonable grounds to conclude that they have one or more activities related to Israeli settlements as defined in Human Rights Council Resolution 31/36.

Impact called on the High Commissioner to expand the list periodically and include any other companies contributing to investment or support institutions operating in Israeli settlements, including Emirati companies.