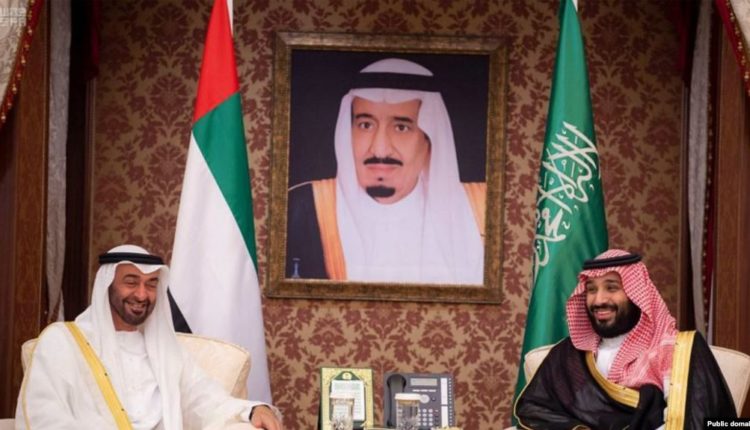 Iran and the United Arab Emirates (UAE) have signed a memorandum of understanding to strengthen and consolidate border security in the latest step, which highlights the rapprochement between the two sides and the collapse of the Abu Dhabi alliance with Saudi Arabia.

The official Iranian news agency (IRNA) said that the commander of the Iranian border guards Qasim Rezaei signed with the commander of the UAE Coast Guard Ali Mohammed Musleh Ahbabi memorandum of understanding to strengthen relations and establish the security of the border.

“The second day of the border diplomacy meeting between the two countries led to the signing of a memorandum of understanding to strengthen border cooperation,” the agency said.

According to the agency, “an emergency border resolution is coordinated through means of communication or meetings between the two countries.”

Regular meetings will be held between the two countries annually in Tehran and Abu Dhabi, and once every six months in one of the border areas at the invitation of both parties, according to the Iranian agency.

The agency said that these meetings with the UAE contribute to strengthening cooperation and strengthening border security, and also provide facilities for the legitimate crossing between the border and fishermen, and to address anyone who tries to violate the security of the two countries.

For his part, the commander of the UAE Coast Guard forces said that the signing of a border memorandum of understanding is a positive step for the two countries and to improve the border security between the two countries, monitor the border, facilitate traffic and so on, according to IRNA.

The UAE said on Wednesday that the meeting of its security official with his Iranian counterpart was limited to border affairs, including fishers and combating smuggling.

This came the day after Tehran confirmed on Tuesday the holding of talks with Abu Dhabi on the “security of the Gulf,” held between the commander of the Iranian border guards and commander of the UAE Coast Guard forces in Iran.

Observers say that the rapprochement between the United Arab Emirates and Iran is the result of the collapse of its alliance with Saudi Arabia in the face of rapid changes by Abu Dhabi towards various issues and files of the region.

Observers believe that the UAE regime at this stage transformations can be described as a strategic game in accordance with appropriate tactics for each position serves its long-term strategy and self-interest without regard to foreign allies, especially in Saudi Arabia.

Of the transformations that will not be the last, what happened to the position of the UAE from the first regional force active in the Gulf (Iran).

Since the outbreak of the nuclear crisis between Iran and the administration of US President Donald Trump and reached a level that many said it was war, not only, where Abu Dhabi together with Riyadh, there are still many doubts about the vandalism of four tankers in the port of Fujairah last month, and it is like a trap for Tehran to fall into, and it is easier to hunt them militarily.

But that the voices and Emirati pounds have to do with official bodies, pointed the finger at Iran immediately before the investigations began, until Abu Dhabi realized the seriousness of that haste and began to fill the matter before the complexity, which made Tehran several times denounce the flop of the UAE in dealing with the Iranian state.

The most prominent form of condemnation was an invitation to more than 50 MPs in the parliament, President Hassan Rowhani, to reconsider relations with the UAE at all levels because of Abu Dhabi’s hostile positions – according to their point of view – and agree their policies with the US hostility to Tehran.

Abu Dhabi has clearly entered with Riyadh on the line of anti-Tehranism and has supported Trump’s shift toward Iran since the crisis between Washington and Tehran began. But both Abu Dhabi and Riyadh have recently felt that relying on Trump to control Iran’s behavior as the capitals want them will not work.