UAE receives the Pope to cover up its human rights violations 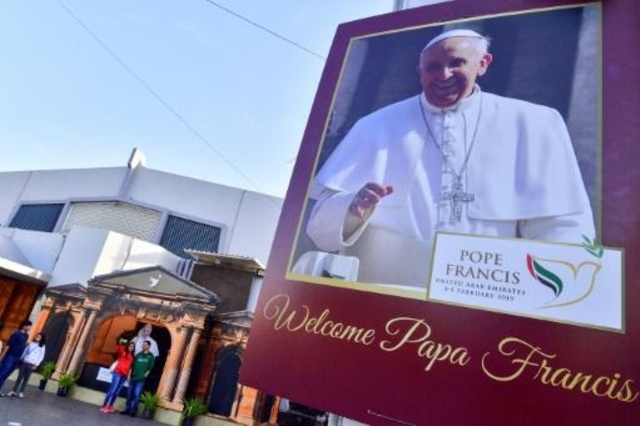 This is the Pope’s first visit to the Arabian Peninsula, in a new effort to strengthen ties between the two religions in an area where religious conflict and extremism have been escalating in recent years.

The pope will attend a religious meeting with Sheikh Ahmed al-Tayeb and representatives of other faiths on Monday in Abu Dhabi before heading a mass at a football stadium in the UAE capital, ahead of a gathering that local newspapers expected to be the largest in the history of the Gulf state.

According to the Apostolic Vicar in the south of the Arabian Peninsula, Archbishop Paul Hinder, the Pope’s visit, which runs from Sunday to Monday, comes at a convenient time to push the “dialogue” forward.

Hinder stressed the good relations established by the Vatican with leaders of other countries in the region, although the Pope’s visit will be limited to the UAE.

The Vatican has diplomatic relations with Kuwait, the United Arab Emirates, Qatar, Bahrain, and Yemen, but has no formal diplomatic ties with Saudi Arabia and Oman.

The ruling regime in the UAE promotes the state as a place of tolerance between different faiths and allows Christian religious practice in many churches, as in other Gulf states.

But the state has been criticized by rights groups for its role in the war in the neighboring country, Yemen, where thousands of civilians have been killed and accused of pursuing human rights activists.

On December 31, an Emirati court upheld the detention of the human rights activist Ahmed Mansour, for ten years, for criticizing authorities through social media.

The judgment was rendered a day before the start of the new year that the UAE called the “Year of Tolerance,” in a country whose government includes a minister of tolerance.

The UAE says it does not follow a conservative Islam but a moderate. The authorities prohibit fanatical sermons in mosques and social media outlets, allow drinking and sale of alcohol in hotels and venues, and does not restrict residents to specific clothing.

The regime is trying to use the occasion of the Pope’s visit to improve its reputation and cover up its dark record of human rights violations.

In the meantime, the head of the National Committee for Human Rights in Qatar, Ali bin Samih al-Marri, met the Pope Francis, at the headquarters of the papal office, carrying messages about the complaints and the suffering of thousands of families who were victims of the States of siege violations.

Al-Marri called on the Pope to pressure those countries to stop their violations and put an end to the suffering of thousands of scattered families and students expelled from their schools as a result of the continuation of the unjust embargo against Qatar for almost 20 months.

According to the statement of the National Human Rights Committee in Qatar, Al-Marri appealed to the UAE authorities and the other countries of the blockade to neutralize civilians and not to involve them in the political crisis and to inculcate their humanitarian consequences in order to protect human rights and defend it. On the peace and security in the world, “warning at the same time that” the persistence of the UAE in their violations will lead to the threat of peace and security in the region.”

During his meeting with the Pope, Al-Marri gave a brief summary of the repercussions of the blockade imposed on Qatar since June 5, 2017, warning of the aggravation of human rights violations due to the intransigence of the siege countries and their refusal to respond to the complaints and appeals of those affected, and having a “dialogue of the deaf” with the calls of international organizations, the reports of the High Commissioner for Human Rights Office, and the decision of the International Court of Justice, which calls for rationality and to resolve the crisis.

“I send a message to your holiness, carried by thousands of separated families, children and women who have been stranded and deprived of their reunion for almost 20 months because of punitive measures that are not related to the morality and the human values because of a political dispute, which no strings attached to them in it,” Al-Marri said speaking to the Pope.

Al-Marri criticized the dual discourse of the governments of the countries of the siege that claim their support for world peace while continuing to besiege people and violate their rights. He wondered: “How do the blockade countries claim their support for peace? And they continue to tear apart and break the social fabric of the Gulf because of punitive decisions that prevent people from communicating; not only in Qatar but also their countries whose people have been spared because of their racist and discriminatory decisions.”

At the end of their meeting, Al-Marri gave the Pope a book entitled “Manuscripts on Human Rights in Islamic Culture” and discussed the possibility of organizing an exhibition of the Arabic calligraphy on “Human Rights in Islam” in the Vatican in the future, after the success and interest received by the exhibition in the previous version, which was embraced by many countries of the world.

The Qatari official informed the Minister of State and Human Rights of the Vatican of all reports documenting the violations of the siege countries, including the “General Report on the siege of Qatar” issued by the National Human Rights Commission, the UN High Commissioner for Human Rights, and the International Court of Justice report on the complaint of the State of Qatar regarding the discriminatory procedures of the United Arab Emirates, as well as the report issued by the National Human Rights Committee on the UAE violations of the decision of the International Court of Justice within six months.

Transparency International: Dubai a haven for criminals and corrupt and money laundering