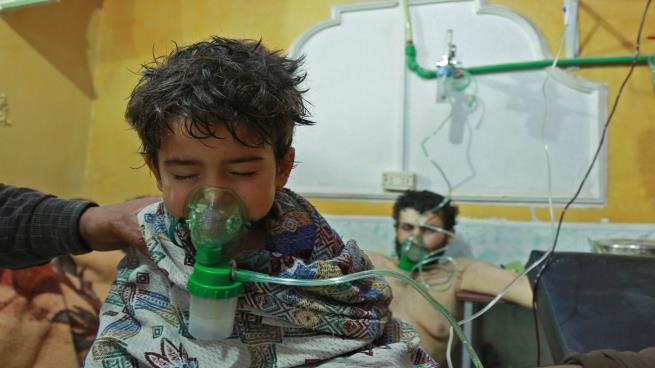 The Washington Post criticized the UAE’s recent normalization with the Syrian regime with reopening its embassy in Washington.

“With Syria’s rebels on the verge of defeat and their former Gulf Arab backers reopening embassies in Damascus,” the paper said, referring to the UAE and Bahrain. “Assad appears to be moving out of diplomatic isolation.”

A report by the World Public Policy Institute in Berlin showed 336 chemical attacks in Syria since the outbreak of the crisis nearly eight years ago. The Syrian regime had the largest share 98 percent, followed by Isis.

The Washington Post described the report as “the most comprehensive record” of the chemical violations committed by the Assad regime since 2011.

The newspaper added that this record could also be considered as part of any war crimes cases may be raised against the Assad regime in international forums in the future.

336 cases of use of chemical weapons, from nerve agents, were documented to simple and dangerous chlorine bombs, the Institute said in its report.

Almost all attacks, 98 percent of them, were attributed to the Assad military or allied forces, including militias known as the “Tiger Forces”, which is supported by Russia. While Isis carried out other attacks.

The GPPI analysis began on December 23, 2012, but the majority of the attacks referred to by the report occurred after the announcement by former US President Barack Obama in 2012 that the use of chemical weapons against civilians in Syria would be a red line for its administration.

The researchers said they reached those results through witnesses testimonies, post-attack analysis, including reports on the effects of using chemicals, and how weapons were transferred to attack sites.

The Assad regime, which had a deal with the Obama administration, called for the destruction of its chemical arsenal to stop a potential US attack after al-Ghouta massacre in 2013. “The Assad regime did not merely ‘get away’ with its use of these banned weapons,” said the report. “It succeeded in using them for strategic ends.”

The report mentioned that many of the subsequent attacks used chlorine, which turns into hydrochloric acid when inhaled. Exposure can damage the victim’s respiratory system and can lead to death in some cases.

Investigation: UAE militias get Libya in a severe crisis of instability