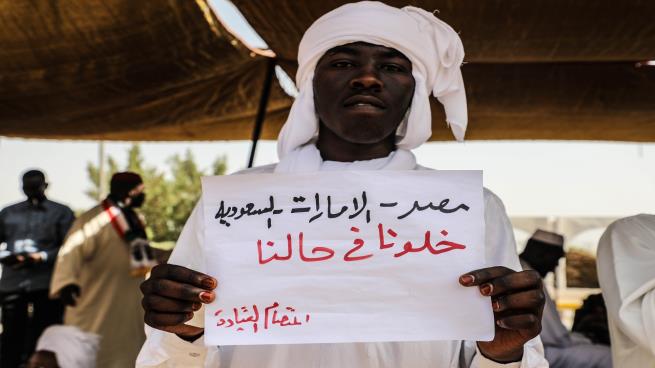 Reliable sources told Emirates Leaks that the ruling regime in the United Arab Emirates has prepared an alternative plan to control the scene in Sudan following the popular revolution that overthrew former President Omar al-Bashir.

The sources said that Abu Dhabi’s alternative plan comes in the light of severe difficulties and a widespread popular rejection of its moves to save the transitional military council in Sudan and support it against the demands of the protesters demanding the handover of power to a civilian council.

The same sources said that the resignation of the Chairman of the Political Committee in the Transitional Military Council, General Omar Zine El Abidine, the former deputy director of the security apparatus, Lieutenant General Jalaluddin Sheikh Tayeb, and the General Tayeb Babeker Ali, was after cooperation between the leadership of the Council and the UAE in an attempt to calm the street.

According to the sources, the UAE and its allies, Saudi Arabia and Egypt, consider that they have an opportunity after the removal of the regime of President al-Bashir, taking advantage of a range of situations and crises, a situation will not be allowed again by the tripartite alliance.

The sources revealed that the new plan of action of the Saudi-Egyptian-Emirati alliance includes starting processing civilian figures and technocrats from within the opposition ranks and opening lines of communication with them to promote them in the Sudanese street if there is a need to respond to the demand movement to form a transitional civil council.

The Sudanese street and the “Forces of Freedom and Change” hold a vision that includes three transitional councils; the first is a presidential council, the second is a civilian mini-government, and the third is a legislative council.

It should be noted that the authorities of the military council in Sudan had arrested a few days earlier, the head of the State of Law Coalition, Ali al-Jazouli, after a symposium in which he sharply criticized the role of the UAE and the interference of Abu Dhabi in the affairs of his country. The move was met with angry reaction from the protesters, who described it as a return to Omar al-Bashir’s practices before the Sudanese authorities were forced to release al-Jazuli hours after his arrest.

Saudi Arabia and the United Arab Emirates have announced a joint package of aid to Sudan totaling $ 3 billion, including $ 500 million from the two countries as a deposit at the Central Bank of Sudan.

But the “Forces of Freedom and Change” rejected the economic aid announced by both Saudi Arabia and the United Arab Emirates and stressed that the aid has political purposes that would implement the agenda of that alliance and put Sudan under their custody as was the case with Egypt.

The Wall Street Journal reported that two foreign powers, allies of the United States, play a major role in the battle to determine the future of Sudan, Saudi Arabia, and the United Arab Emirates, which have given billions of dollars to the transitional leadership.

But Riyadh and Abu Dhabi have found an opportunity to strengthen their strategic interests in the Horn of Africa: keeping Iran away from the Red Sea, undermining Qatar’s and Turkey’s regional ambitions, and keeping Sudanese troops on their side in the war in Yemen, Gulf officials and Western diplomats said.

But Sudanese protesters demanding a civilian government turned to recent moves, carrying banners warning Riyadh and Abu Dhabi that “you will not control our future.”

Within days of replacing President Omar al-Bashir by military rule, the two countries, Saudi Arabia and the United Arab Emirates, provided a $ 3 billion package of assistance to help with the political transition.

After years in which al-Bashir appeared to be a fickle ally with Saudis and Emiratis, he courted them for money, but without showing full loyalty to them in their dealings with politics and Islamic affairs. When Bashir went to the Gulf to ask for financial aid to face the protests, he was refused.

But Riyadh and Abu Dhabi now find friendly faces in the new leadership of the transitional military council headed by Abdul Fattah al-Burhan, who has led the deployment of about 10,000 Sudanese troops in Yemen to protect UAE troops.

The article points out that the UAE and Saudi interest in Sudan is nothing new. The two countries have invested in this country by providing at least $ 3.6 billion since 2016, according to the central bank of Sudan, as a reward for Sudan to abandon its traditional ally Iran.

Saudi Arabia and the UAE are also looking to protect tens of billions of dollars in agricultural investment in Sudanese territory to produce wheat and grain and bring them for domestic consumption.

In northern Africa, Saudi Arabia promised retired Libyan leader Khalifa Haftar millions of dollars to help him fight against the internationally recognized Libyan Government of National Accord in Tripoli.

In the strategic African coast, the Gulf states have developed a massive military base to provide logistical support for the war in Yemen, where the Saudi-UAE-led coalition is fighting the Huthis. The UAE maintains a military base and a port in Somaliland.

The covert dealings between the Gulf states and the Sudanese generals confirm that politics, not street protests, determine the next stage of this strategically important country.

The United States, which has had a major impact on Sudan over the last 25 years, is currently silent about Saudi and UAE interference in Sudanese affairs, the New York Times said in a report.

The newspaper pointed out that America, which used to be so concerned about the Sudanese affairs that it was the main factor in forming Khartoum’s relationship with the outside world, is now absent in critical moments in which the future of Sudan is formed and leaves its fate to Riyadh and Abu Dhabi.

The newspaper said that the steps taken by Riyadh and Abu Dhabi are to support the military authority in Sudan and to prevent any shift to civilian or democratic rule, including providing $ 3 billion in cash and sending their envoys to Khartoum. The newspaper mentioned Taha Al Hussein and said that Sudanese say that he is a spy for Riyadh, in addition to coordination with Cairo, which currently chairs the African Union.

The former US diplomat in Sudan, Payton Knopf, said that in the past, US would have responded by holding high-level meetings with its allies to set a road map for the country’s transition to democracy. Knopf described the current US position as much weaker than the European Union and the African Union position.

Knopf described Sudan as one of the most important geopolitical shifts in the Horn of Africa since the end of the Cold War.

The New York Times said the initiative was taken by Saudi Arabia and the United Arab Emirates, revealing that five opposition Sudanese forces, including several armed movements, had recently visited Abu Dhabi for talks to persuade them to join a government led by the military.

The newspaper pointed out that Yasser Arman, deputy head of one of the armed movements in Sudan, recently visited the UAE to meet officials there, and quoted him as saying that they were dissatisfied with the US role and called on Washington to do more to engage with “people who made the revolution.”

The US State Department announced its support for the transition to civilian rule in Sudan, but the White House has not done so to date, and quoted some former US officials and analysts fear that the position of the White House from Sudan is similar to his position than what is happening in Libya.

It would not only be disappointing to see the Sudanese people’s organic revolution get hijacked by foreign agendas, it would be deeply destabilizing, said Zach Vertin, a former Obama administration official who worked on Sudan, and the author of a recent book on South Sudan. “Sudan cannot become yet another battlefield in a larger proxy war between Middle Eastern rivals.”

The report did not overlook the strong opposition of the Sudanese to the Saudi-UAE intervention and the slogans in which they expressed this rejection.