Analysis: the Human Document of Fraternity… UAE promotes itself as a righteous country 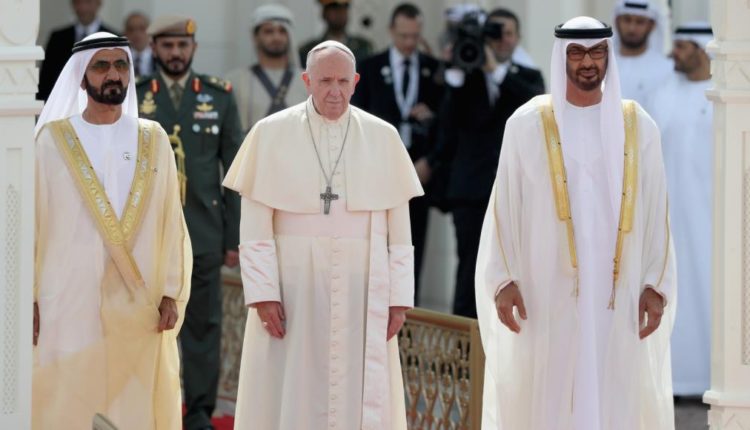 This is a paragraph from a number of paragraphs of the document of human Fraternity, which was written by the Global Conference of Human Fraternity, organized by the Muslim Council of Elders under the patronage of the Crown Prince of Abu Dhabi Sheikh Mohammed bin Zayed.

The document was signed by Pope of the Catholic Church Francesco, a religious symbol of the Catholics, on behalf of the Catholic Christians in the world. The Sheikh of Al-Azhar Ahmed Al-Tayeb was chosen to represent the Muslims, without unanimity of the Muslim nation, to sign the document, considering Al-Azhar is a scientific religious institution, though it no longer represents the unanimity of Muslims today. Especially as it has become an institution dominated by the Egyptian regime, and no longer has influential position to unify Muslims as it was known in past.

This was a quick digression before we talk about the document of human fraternity that started from Abu Dhabi, the capital of the United Arab Emirates and made 2019 the year of tolerance and promoted this meaning or value in preparation for the visit of Pope Francesco and perhaps for other purposes.

The document states, “We, who believe in God and in the final meeting with Him and His judgment, on the basis of our religious and moral responsibility, and through this Document, call upon ourselves, upon the leaders of the world as well as the architects of international policy and world economy, to work strenuously to spread the culture of tolerance and of living together in peace; to intervene at the earliest opportunity to stop the shedding of innocent blood and bring an end to wars, conflicts, environmental decay and the moral and cultural decline that the world is presently experiencing.”

Theoretically, this is a good call, but the reality that surrounds the conference and only a few meters away indicates that there is no possibility of accepting the idea of spreading a culture of tolerance, coexistence, and peace.

Take Abu Dhabi as an example, the capital where this humanitarian document was announced. Where are Abu Dhabi and its politicians from the nearest neighborhood! Tolerance is absent from its political dictionary in all that has been associated with Qatar for more than 600 days on its siege, without regard to the relations and ties of kinship, religion and human brotherhood.

How does Abu Dhabi want the world to adopt the articles of this document at a time that it still supports the chaos in Yemen by insisting on staying in it, which is on the edge of a real humanitarian disaster, and still supporting the chaos in Libya by supporting the retired general Khalifa Hafer and his militias, and other Arab sites, that still playing the invisible hand in their policies which only making the situation worse.

The document also says in another part “Dialogue, understanding and the widespread promotion of a culture of tolerance, acceptance of others and of living together peacefully would contribute significantly to reducing many economic, social, political and environmental problems that weigh so heavily on a large part of humanity.”

Yes, we all say so, but to be realistic, Abu Dhabi, which announced and supported and wrote this document does not tolerate with the other’s opinion, the people behind the bars of the most prominent evidence.

Similarly, when Sheikh Al-Azhar Ahmed Tayeb signs the document, he realizes that he has come from a country where its military and politicians are more refusing to the other opinion than their counterparts in Abu Dhabi.

What culture do they call for and they are so contradictory?
In another paragraph, the document emphasizes human fraternity and declares firmly that “we resolutely declare that religions must never incite war, hateful attitudes, hostility and extremism, nor must they incite violence or the shedding of blood. These tragic realities are the consequence of a deviation from religious teachings.”

The Muslim Council of Elders, based in Abu Dhabi, is the product of clear and understandable exploitation of religion for political purposes, especially after Abu Dhabi collided with the largest Muslim groups, the Muslim Brotherhood, and confronted with it everywhere.

One of the consequences of this unwarranted enmity was that Council, which has only recently appeared (2014), can only be interpreted as a tool to divide the ranks of Muslim scholars who have gathered since 2004 under the name of the International Union of Muslim Scholars to be “a fundamental reference to the theory and rationalization of the civilized project of the Muslim Ummah in the context of its peaceful coexistence with the rest of humanity.”

Because most of its members are from the Muslims Brotherhood, the International Union of Muslim Scholars has been fought, and an alternative entity was created, which cannot be outside the political agendas of the capital of the headquarters of Abu Dhabi, just as at the same time the Document of Human Fraternity that cannot be but “tactics of the tribe” as part of a long-term strategy pursued by the emirate since the Arab anti-spring revolutions that are no longer hidden to any follower of its activities in any direction that the magnetic compass can refer to.

Emirates to transfer US weapons to Al-Qaeda organization in Yemen