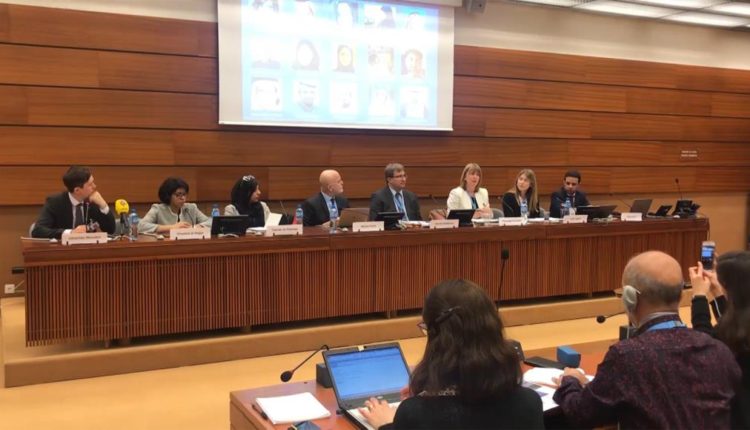 Radha Stirling, director of Detained in Dubai, a UK based human rights organization, expressed concern over the negative impact of the memorandum of understanding signed by London and Abu Dhabi to help improve the UAE image in Britain.

She said that this came at a time when the British academic Matthew Hedges was being held in an Emirati prison.

Stirling urged the British government to prevent mistreatment of its citizens who were mistakenly detained in UAE prisons instead of helping the UAE improve its image.

She added that a number of British citizens have traveled to the UAE, convinced that it is a safe destination, and ended up in prisons, where they faced harassments and torture and were forced to recognize crimes they did not commit.

She called on the British government to warn its citizens and tell them the high risks of traveling to or through the UAE.

The UAE authorities arrested Hedges on May 5 at Dubai International Airport after a two-week visit to the country. Then, he was pardoned after being sentenced to life imprisonment in November after publishing a video in which he admits that he was a member of the British intelligence service and that he was searching about military regimes in the UAE.

After being released, the British academic said he had no choice but to confess of espionage charges while he was in the UAE for nearly seven months. He was shocked when the UAE authorities asked him to steal documents and information from the British Foreign Office.

International human rights groups have called on the UAE to give them immediate access to Sheikha Latifa, the daughter of Dubai’s ruler, Sheikh Mohammed bin Rashid Al Maktoum, about a year after she was forcibly returned to her country after trying to escape, the Independent newspaper reported.

Sheikha Latifa, 33, has not spoken publicly since she was forcibly returned to Dubai and disappeared for nine months last year before being seen once at a strange meeting with former Irish President Mary Robinson, the UN High Commissioner for Human Rights.

The strange meeting, as described by the British newspaper, was widely covered. Last December, however, the meeting was criticized by human rights groups because of its administration by the ruling family, while Robinson is a personal friend of the wife of Dubai’s ruler, Princess Haya al-Hussein.

About a year after the forcible reinstatement of Sheikha Latifa, human rights groups expressed their deep concern about her welfare, not knowing what had happened to her since her detention, from March to December 2018, when she appeared in Dubai.

“Human Rights Watch is still calling for her to be able to travel to a third country where we and other monitors can be assured she is able to speak freely and independently without fear of retaliation,” Hiba Zayadin of HRW told The Independent.

“Ms. Robinson is not equipped to make an evaluation of Latifa, who was in the presence of people who allegedly forcibly disappeared her,” she added.

“Since her appearance with Robinson and members of the ruling family, Sheikha Latifa has never appeared again, and it was the first time she has appeared since she was forcibly returned to her country,” Ziaden said.

“The group would raise her case with the UN committee on enforced disappearances in a meeting next month,” said Radha Stirling, who has been arrested in the UAE.

“We only learned at the end of 2018 that Latifa is alive, but she appears to be under some form of medical treatment which she never required before in her life, and she is still not able to communicate or move freely,” Ms. Stirling said.

Sheikha Latifa appeared in a video from a boat she was trying to use to flee her country and arrived at the Indian coast about a year ago.

Latifa confirmed in the video that she wanted to leave the UAE after being detained for more than three years and was prevented from traveling and driving. She also claimed to have been tortured, detained in solitary confinement, threatened with death and drugged to prevent her from escape.

UAE authorities denied that Sheikha Latifa had been forcibly returned to the country or hurt, but she did not elaborate on the tragic events that took place between March and December 2018 when she appeared in footage with Robinson.

Ms. Robinson told BBC Radio 4 that she was looking forward to building a stable and happy future, saying she was mentally ill, vulnerable and troubled, and regretted the video she showed. However, the circumstances surrounding the tender need to be reviewed.

The former president of Ireland faced a flood of criticism following her call with Sheikha Latifa in the UAE for failing to ask why Sheikha Latifa disappeared for a long time.