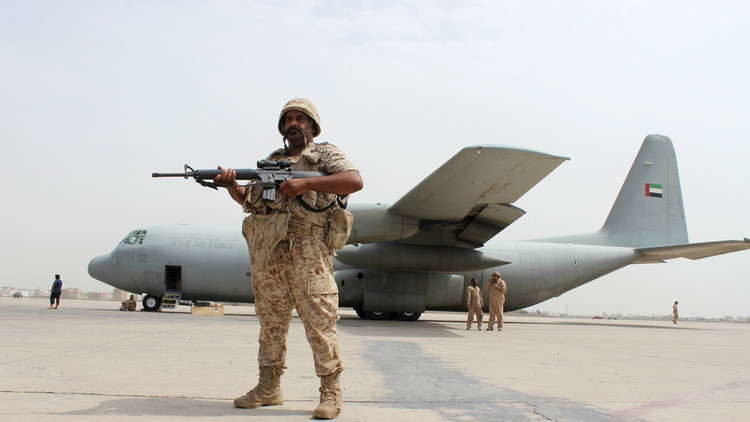 The Italian House of Representatives approved a bill that would stop the sale of arms to the UAE and its ally, Saudi Arabia, on the background of their war crimes against civilians in Yemen.

The decision of the Italian parliament came out of “fear of the use of these weapons from the forces of the UAE and Saudi Arabia in practices that violate international humanitarian law in Yemen.”

The decision came after months of pressure from the Italian civil society and the signing of more than 40,000 people on a petition demanding the Italian government to suspend the sale of arms to Saudi Arabia and the UAE.

In the past, Germany and Denmark have banned the sale of arms to Saudi Arabia, as have the US Senate and House of Representatives, whose members have voted in this direction.

For the fifth year in a row, Yemen is witnessing a war between pro-government forces and Houthi militants accused of receiving Iranian support and controlling the provinces, including the capital Sanaa since September 2014.

The war made three-quarters of the population in need of humanitarian aid, pushing the country to the brink of famine, while the United Nations considered the crisis facing the Arab country “the worst in the world.”

Last week, the British government announced a ban on the sale of new weapons to Saudi Arabia and the United Arab Emirates, a week after the Court of Appeal ruled that arms sales to the kingdom were illegal.

The British government said in a statement that it opposed the decision of the Court of Appeal and will appeal against it, but will not allow during this period to sell new weapons to Saudi Arabia and the coalition countries, most notably the UAE.
The ban does not cover current arms deals, but the government will review the licenses of these deals in the framework of the decision of the Court of Appeal last, the government added.

Last week, the Court of Appeal in London ruled out the illegality of arms deals under which the British government sold weapons to Saudi Arabia and was used in the war in Yemen.

The court attributed its decision to not following the required procedures in arms deals that could be used in Yemen.

In May 2018, the Court of Appeal in London allowed the Campaign against the Arms Trade to file an appeal against a previous Supreme Court decision on the legality of British arms sales to Saudi Arabia.

The Supreme Court ruled last July that the sale of British weapons to Saudi Arabia used in its war in Yemen did not violate human rights laws.

According to media reports, the value of arms sold by London to Riyadh amounted to about US $ 6 billion, since the Arab alliance intervened in Yemen in 2015.

The Swiss foreign ministry on Wednesday banned Pilate Aircraft Industries from working in Saudi Arabia and the United Arab Emirates, saying the company violated the rules for providing logistical support to foreign armed forces now engaged in a war in Yemen.

The ministry said it had gathered “sufficient evidence” that Pilatus had not disclosed its activities in support of foreign armies as provided for under Swiss law, adding that it had informed the prosecutor of shortcomings for further investigation.

The Swiss government has been investigating Pilatus for months.

According to the company’s annual report, in 2017 Pilatus signed a contract with Saudi Arabia to support the P-21 aircraft fleet operated by the Saudi air force.
The Federal Department of Foreign Affairs said in a statement: “Support services supplied by Pilatus Aircraft to the armed forces of Saudi Arabia and the United Arab Emirates… are incompatible with the federal government’s foreign policy objectives.”

“The FDFA has therefore called for these services to be discontinued.”

The administration said that Pilatus had 90 days to go out of Saudi Arabia and the UAE, adding that the company could continue to supply the armed forces in Qatar and Jordan.

“Pilatus Aircraft Ltd will review the Federal Department of Foreign Affairs’ decision and provide a response in due course,” the company said.

Last November, a new European country, the Netherlands, joined the list of European countries that have banned arms exports to the UAE, Saudi Arabia and their allies for their involvement in horrific war crimes against civilians in Yemen.

At the time, Dutch Minister of Foreign Trade and Development Sigrid Kaag announced that there would be no arms exports from the Netherlands to Saudi Arabia, Egypt and the UAE unless it was proven that they would not be used in the war in Yemen.

In response to parliamentary questions, the Dutch minister said the Dutch government had tightened its terms on arms exports to prevent its use in the war in Yemen.

She pointed out that the restrictive regime for the export of weapons applied to Saudi Arabia has been extended to include Egypt and the UAE.

The European Parliament has on several occasions called for a ban on arms exports to Saudi Arabia because of the war in Yemen and for the extension of the ban to all countries participating with Saudi Arabia in this war.

On November 22, Denmark suspended the renewal of arms export licenses to Saudi Arabia and the UAE due to the war in Yemen. In addition to weapons, the Danish decision includes techniques that may have military uses.

The Norwegian Foreign Ministry also announced the freezing of licenses to export arms to Saudi Arabia, against the background of what it termed “recent developments” in the Kingdom and the ongoing war in Yemen.

In turn, Germany called on European countries to do the same and to suspend arms sales to the Kingdom at the moment.