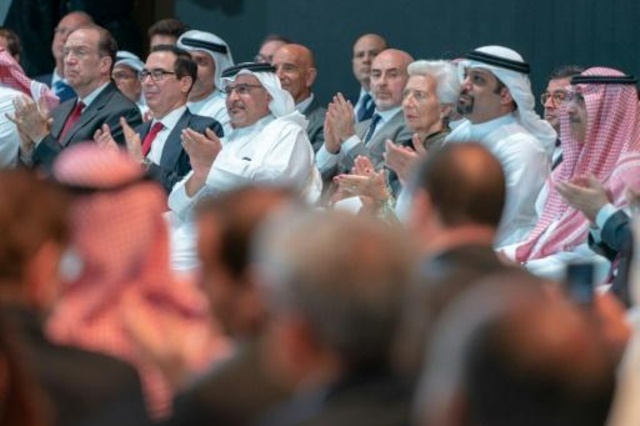 A two-day workshop was organized by the US administration in Bahrain to discuss the economic aspects of Washington’s plan to liquidize the Palestinian cause, which known as the “Deal of the Century.”

The UAE has emerged as one of the first countries to actively participate in the Bahrain workshop through official delegations and businessmen as part of the ruling regime in Abu Dhabi involvement in normalization with Israel.

The UAE delegation was headed by Minister of State for Financial Affairs Obaid Al Tayer.

Emirates Leaks learned that Al Tayer held several unannounced meetings with Jared Kushner, Senior Advisor to the President of the United States Donald Trump, who heads the US delegation in preparing the “Deal of Century” and the Bahrain Workshop.

According to reliable sources, the UAE minister pledged to Kushner full political and financial support for the implementation of the deal of the century on the ground whether the Palestinian leadership’s accepted or refused the plan.

Emirates leaks also learned that the UAE minister held a series of meetings with Israeli officials and businessmen who participated in the workshop and discussed enhancing the fields of cooperation economically, politically and technologically.

The UAE minister agreed with Israeli officials to promote and accelerate the pace of normalization in the next stage, especially in light of what Abu Dhabi promotes the growing threats of Iran to the Middle East.

In addition to the official UAE delegation, businessmen from the UAE participated actively in the Bahrain workshop especially in the field of holding meetings with Israeli officials and businessmen.

The Hebrew media highlighted Emirati businessman Mohammed al-Abar, who is a participant in the Bahrain workshop, while a prominent Hebrew newspaper described him as “a lover of the Israeli people.”

Activists on social media sites broadcast a video clip of Alabbar, the founder and chairman of Emaar Properties, speaking to an official correspondent of the Hebrew-language Kan radio station on the sidelines of the Bahrain conference.

During the interview, he was asked: “What can you say to the Israeli public today?” Alabbar replied, “We all live in the same cold little planet. We have duties towards families, duties towards the communities in which we live, duties towards our neighbors and the world.”

Alabbar’s personal card indicates that he was born in the UAE on November 8, 1956, and holds a bachelor’s degree in finance and business from the University of Seattle, USA, which awarded him an honorary doctorate degree.

He is the founder and chairman of Africa Middle East Resources (AMER), and a leading founder and shareholder of RSH company in Singapore, and founder of the Noon.com platform.

Mr. Alabbar also serves as Chairman of the Americana Group of Companies, Trad Winds, a Malaysian hospitality and entertainment company, Director of Nimchi Holdings and ANH HOLDINGS LIMITED, at the Dubai International Financial Center (DIFC) in the United Arab Emirates.

He was the founding director general of the Dubai Department of Economic Development and was a member of the Executive Council of Dubai, Dubai Economic Council, the Securities and Commodities Authority, and Commercial Bank of Dubai.

Owning one of the largest real estate companies operating in the UAE, and managing a number of other companies made Alabbar an influential financial force.

And his presence at a conference on the “deal of the century” has an impact; especially since his relations with “Israel” and is one of the most important supporters and supporters of the Declaration of “deal” and normalization with the Israeli occupation state.

The Hebrew newspaper “Israel Hayom” described him on the sidelines of its coverage of the Bahrain conference, as “loving the Jewish people.”

The Israeli media, which commissioned delegates to the workshop, used to celebrate Bahrain as a gateway to continue the normalization between Israel and the Arab countries, while didn’t cover the economic agenda.

Six Israeli media outlets have commissioned their correspondents for political, Arab and Middle East affairs to Bahrain, including the Israeli government’s official Israeli radio and television.

Israeli Channel 13 also sent its political correspondent, Barak Ravid, who has close relations with the Arab regimes’ printing press, as well as journalist Ariel Kahana, a correspondent for Israel Hayom, which is close to Prime Minister Benjamin Netanyahu.

While the newspaper “Haaretz” was commissioned its correspondent for political and Arab affairs, Noa Landau, while the Maariv newspaper only sent Rabbi Kenan, who is close to the Bahraini regime.

Israel used the official Israel spokesperson to the Arab media in the Israel Prime Minister’s Office, Ofir Gendelman, to broadcast messages to the Arab world on the Bahrain Workshop in order to strengthen the Israeli discourse promoting of the workshop of Bahrain, which aims to bypass the Palestinian Authority and blame it if it didn’t respond to Trump’s efforts.

From Bahrain, the media coverage of all Israeli delegates appeared to be consistent and sequential in terms of contents and stations highlighted. The Israeli media delegations that landed in Manama were warmly welcomed.

Noa Landau said that what happened in Manama yesterday was the largest normalization meeting seen in recent years between representatives of Arab and Israeli countries, under the auspices of the Trump Economic Peace Conference, with the aim of raising $ 50 billion for the Palestinians told the Bahrain conference. She added that if the money was paid, the peace plan that the United States intends to present will be after the Israeli elections.

Some British media also considered that the aim of the Bahrain workshop was not to invest in Palestine to improve the economy or living conditions of its citizens, nor to prepare for a political solution to the Palestinian-Israeli conflict, but to promote normalization between Arab countries and Israel.

These sources said that this workshop, which opens tomorrow in the Kingdom of Bahrain will not accomplish anything on the economic level, if not disclosed the political aspect of the Middle East peace plan.

Middle East expert Meghan Otoli told Middle East experts that the workshop, the first step toward what Washington calls the “Deal of the Century” would serve only normalization between Israel and the Gulf Arab states.

She added that this workshop, which is said to be dedicated to attracting investment and building a prosperous future for Israel and the occupied Palestinian territories, will do nothing other than the declaration of investment commitments not implemented as is common in the Arab world.