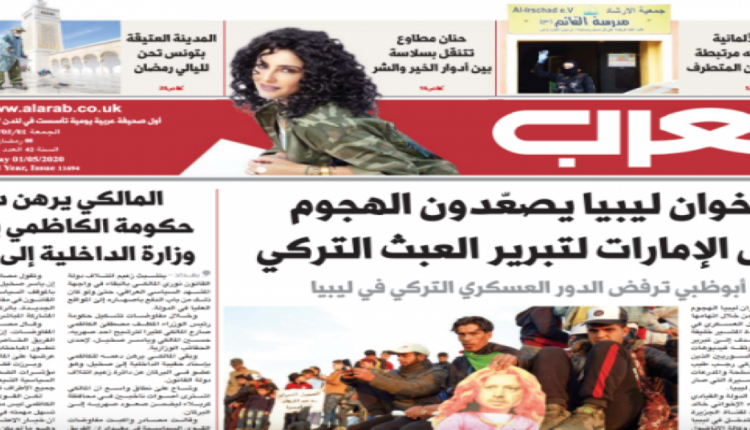 The Emirati newspaper, Al-Arab, led a media incitement campaign against the Gulf state, at a time when Abu Dhabi tried to evade responsibility.

The newspaper published a satirical report entitled “Creating smart cities does not mean that societies are smart,” in an apparent reference to Saudi Arabia.

The newspaper attached a picture of the capital, Riyadh, with the report. Followers considered that The Arab directed a second insult to Saudi Arabia within days.

The newspaper had described Saudi Arabia as a failed state.

The tweeters asked about the reasons for the attack on Saudi Arabia in the newspaper, and what drives Abu Dhabi Crown Prince Mohammed bin Zayed to insult the Kingdom.

A few days ago, the Kuwaiti Ministry of Foreign Affairs announced its strong rejection and dissatisfaction with the words offensive against the state and its symbols that appeared in an Emirati newspaper.

The Foreign Ministry’s statement read: “Kuwait expressed its resentment and strong rejection of the expressions contained in an article published in the Emirati newspaper, Al-Arab,” considering what was mentioned in the newspaper “an insult to the State of Kuwait and its symbols.”

The Foreign Ministry statement indicated that it submitted an official memorandum to the UAE, explaining Kuwait’s position in this regard.

The statement added that “officials in the UAE Ministry of Foreign Affairs and International Cooperation expressed their rejection of any offence to the symbols of Kuwait, who enjoy the highest levels of appreciation and respect.”

Kuwait’s discontent came after the newspaper, Al-Arab, funded by Abu Dhabi and issued from London, published a news item entitled “An internal crisis that surprises Kuwait’s euphoric Emir with the success of his mediation between Qatar and Saudi Arabia.”

In its article, the newspaper stated that “members of the Kuwaiti National Assembly (Parliament) have submitted an interrogation against the Prime Minister, Sabah Al-Khaled, for committing constitutional violations and procrastinating the government in presenting its program of work. This reflects the outbreak of sharp differences between Parliament and the government.”

For its part, the UAE tried to evade responsibility for the Al Arab newspaper’s incitement campaign against the Gulf states.

Hind Maneh Al-Otaiba, Director of Strategic Communication at the Ministry of Foreign Affairs and International Cooperation in the UAE, stated that Al-Arab newspaper is not affiliated with the state.

Emirati opponents to Mansour bin Zayed: The UAE has changed for the worse