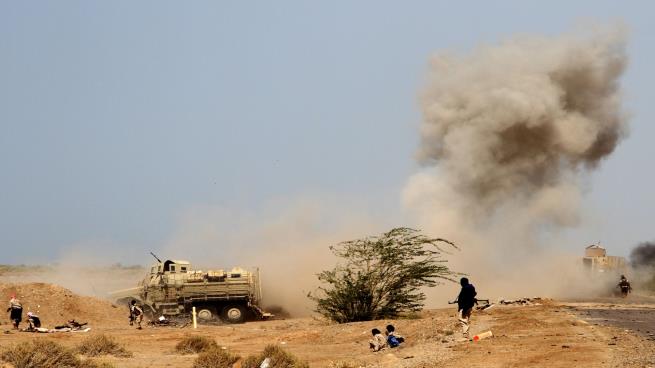 Human Rights Watch called on the UAE and Saudi Arabia to accede to the 1997 Mine Ban Treaty and to abandon any use of these indiscriminate weapons.

The situation came amid a bloody escalation of the humanitarian impact of the use of landmines in Yemen, especially from the UAE-Saudi alliance involved in the killing of tens of thousands of civilians in Yemen.

“Saudi Arabia and the UAE hope to burnish their tarnished humanitarian credentials by funding mine clearance in Yemen, but that effort is undermined by their failure to ban all use of antipersonnel mines,” said Steve Goose, Arms Division director at Human Rights Watch and chair of the International Campaign to Ban Landmines. “It makes little sense to spend millions clearing landmines if you insist on the right to use these weapons.”

Saudi Arabia and the UAE have not joined the 164 countries that signed the Mine Ban Treaty of 1997, which came into effect on 1 March 1999.

The treaty provides the humanitarian framework for their eradication by requiring clearance of mined areas within 10 years, destruction of landmine stocks within 4 years, and assistance to mine victims, the organization said.

Human Rights Watch said it has documented about 90 apparently unlawful airstrikes by the Saudi-UAE coalition, which have left explosive remnants. The coalition has also used banned cluster munitions and incendiary weapons according to the organization.

The international rights organization also drew attention to “inadequate safety standards of the landmine clearance program in Yemen as at least 11 deminers have died over the past six months while working to clear mines.”

In this context, the organization stressed the need to “Saudi and UAE-funded demining operations should coordinate with Yemeni and international humanitarian demining groups to ensure that information on contamination and clearance is fully shared between all clearance groups.”

“The ongoing conflict in Yemen is causing a humanitarian crisis and resulting in a deadly legacy of not only landmines, but explosive remnants of war, which threaten lives and limbs,” Goose said. “The dire situation on the ground is making systematic survey and clearance of contaminated areas a huge challenge.”

The organization notes that it was one of the founders of the International Campaign to Ban Landmines and won the Nobel Peace Prize jointly with Judy Williams in 1997. It contributes to the Landmine Monitor research initiative, which evaluates the implementation of the Mine Ban Treaty and restricts it to emerging standards that define mines Anti-personnel.

All States are invited to participate in treaty meetings, regardless of whether or not they are bound by the treaty.

“Saudi Arabia and UAE should use the platform provided by the Mine Ban Treaty’s Review Conference to announce the steps they will take to join this treaty,” Goose concluded.