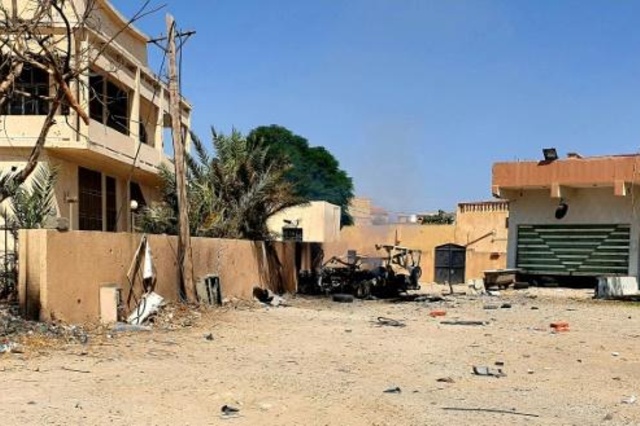 The United Arab Emirates (UAE) is launching a war in Libya with daily drone attacks on its ally the war criminal Haftar, to spread chaos and sabotage in the country.

In the last few hours, a United Arab Emirates aircraft bombed the security forces in the city of Sirte with three raids, but there were no casualties.

The media office of the Government of National Accord said on Saturday that the plane that carried out the raids was an Emirati drone.

the media office added in tweets that “the UAE aviation supporter of the war criminal Haftar targeted the Sirte complex for mills and feeds, and caused material losses within this civil and vital facility of the city.”

He also accused the UAE airline of marching by targeting Sirte Qaradabiya cattle station in the Central Water Investment Authority, known as the cows project, and left material damage, and injured one of the workers shrapnel.

the media office explained that this civil and vital facility for the city feeds Sirte and the central region by about 3,000 liters of milk a day.

Haftar’s militias, on orders from the UAE, have been pursuing a faltering assault since April 4 to seize the capital Tripoli, the seat of the Government of National Accord.

Libya’s skies are more crowded than ever, not because of the intensity of commercial aviation but with another type of smart military drones, especially the UAE.

Libya does not have this type of aircraft. Arno Dulaland, a military expert, said that after extensive use of warplanes at the beginning of the war, most of the aircraft were out of service and in need of maintenance, and both sides had to arm an advanced type of drones.

For his part, retired Brigadier General of the Army Ahmed al-Hasnawi that the participation of foreign air route in the battles in Tripoli, is not a secret. “The Libyan Air Force does not have this type of aircraft at all, but its fleet is made up of Soviet-era aircraft 40 years ago,” he said.

He pointed out that “Libya does not have a regular army” and “UAE support for Haftar clearly visible.” At the same time, he stressed that resolving the battle by land in the absence of regular forces on both sides is difficult, if not impossible. “It’s complicated and resolving a battle without effective air intervention is not easy,” he said.

Both sides continue to intensify their drone attacks. The Government of National Accord planes targeted the Al-Jafra airbase, 650 kilometers southeast of Tripoli, which Haftar forces take as a major operations and supply base, as it is a vital gateway between the cities of eastern, southern and western Libya.

Forces loyal to Haftar continue to hit the airbase in Tripoli and Misrata, about 200 kilometers east of the capital.

In their official statements, the parties affirm that frequent strikes against air bases are aimed at “foreign drones” and damage to their control rooms.

Ghassan Salama, the UN special envoy to Libya, expressed concern that the “geographical scope of violence” could be widened by the exchange of first-hand air attacks between the two sides by targeting al-Jufra and Misrata air bases at the end of July.

Observers confirm that Haftar does not intend to dialogue to resolve the Libyan crisis, but is trying to drag the UAE to further intervention in the war, where Abu Dhabi is expected to launch soon air strikes carried out by (Mirage 2000) French.

Since the outbreak of the war south of the capital, Haftar and the Government of National Accord forces have exchanged the downing of most of the shabby Soviet warplanes and published numerous photographs showing the wreckage of aircraft at various locations across the country.

The fighting between the two sides, which is nearing to complete its sixth month, caused the deaths of about 1093 dead and 5762 injured, including civilians, while the number of displaced nearly 120 thousand people, according to UN agencies.

The professor of law at the University of Darnah Najla al-Shahoumi said that the conflict in Libya “a public war between the poles of the international community in Libya’s Libyan hands,” pointing out that this country has turned into “an actual arena of conflict, the most prominent parties of the UAE.”