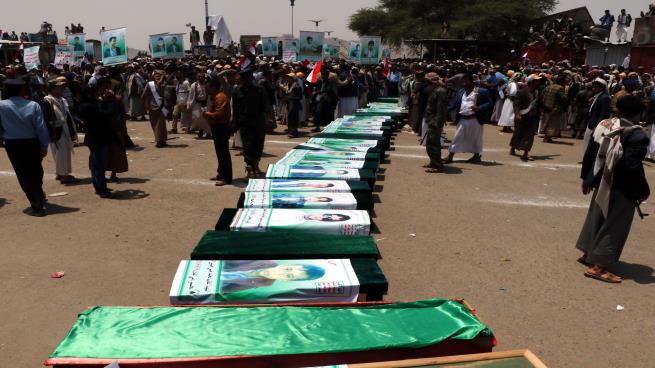 The conflict in Yemen since the escalation began with the start of the operations of the coalition led by Saudi Arabia and the United Arab Emirates enters its fifth year on Tuesday, without a real horizon for a solution soon, amid Emiri involvement in massacres and war crimes against Yemeni civilians.

After nearly four years of air strikes and fighting on the ground, coalition-backed government forces are still unable to defeat the Huthi rebels, while the humanitarian crisis threatens millions of people with starvation.

The images of Yemenis suffering from malnutrition, with their very thin and impotent bodies, provoked condemnation and anger in the world, causing the UAE and Saudi Arabia embarrassment and widespread international criticism.

In Washington, the Republican-controlled Senate in mid March voted in favor of decision calling for the withdrawal of the troops supporting the Saudi-UAE-led coalition in the war in Yemen unless they were authorized by Congress.

The Saudi-UAE coalition war has resulted the death of about 10,000 people since it began on March 26, 2015, according to the World Health Organization, while independent human rights groups say the actual death toll could be five times more than that.

The conflict has caused the worst humanitarian crisis in the world, according to the United Nations, which says about 22 million Yemenis – three-quarters of the population – are in a difficult situation, needing food aid, including some 14 million, half of them are children, are at risk of starvation.

The head of the UN Human Rights Council, Michelle Bachelet, recently said that the killing and injury of children in Yemen continues at a worrying pace despite the truce agreement in Hodeidah amid estimates that eight children are killed or injured in Yemen every day.

Although four years of the Saudi-UAE alliance’s war in Yemen has not made decisive progress on either front, targeting civilians continues in more than one province, killing hundreds including children, and killing entire families.

Markets, roads and others have been targeted, which international reports say could amount to war crimes as the war enters its fifth year.

Emirate Leaks documented the most tragic stations in Yemen in the past year, adding to the previous massacres that have had a direct impact on the reputation of the coalition, in Yemen and internationally.

On April 22, dozens of citizens attended a wedding party at the home of Ja’far Musabi in the Bani Qais district in the northern province of Hajjah before coalition warplanes dropped bombs and rockets at the attendees. The celebration turned into a collective tragedy. More than 80 civilians, including children and women, were killed and wounded.

Bombing the presidential office in Sanaa

In May 2018, Sana’a was on a date with a massacre in one of the busiest areas, where coalition aircraft bombed the headquarters of the President’s office, under the Houthis, in the Tahrir area, in the afternoon. A large number of civilian casualties were officials or bystanders, while the Coalition claimed to have targeted a meeting of the Houthi leaders.

On 25 June last year, the town of Amran, the governorate center of the same name, was on a date with a massacre, with coalition aircraft targeting residential homes, killing more than 30 people, including members of one family.

At the beginning of August, the city of Hodeidah in the west of the country witnessed a massacre, where the gate of the General Hospital of Thawra, the largest hospital in Yemen, and the fish market near the hospital were shelled and dozens were killed. The Houthis accused the alliance of targeting the region, but the Yemeni government and the alliance accused the Houthis of being behind the bombing. Most of the reports said the shelling was with mortars.

The massacre of Dahyan in Saada

One of the most important massacres witnessed by Yemen last year was the targeting of a bus carrying dozens of children on August 9, as it passed through the market of Dahyan in Saada Governorate. The coalition spokesman, Turki al-Maliki, announced after the crime that the raids targeted a “legitimate military target,” but the images that were published from the site of the attack were shocking and show the victims of children, which has met a wave of unprecedented international convictions, the coalition was forced to issue a subsequent statement It is considered that the bombing was done by mistake.

On October 13, 2018, Hodeidah witnessed a massacre of two buses carrying displaced persons in the Jabal Ras district, killing 37 people. Hodeidah has witnessed many similar attacks, whether by air strikes or artillery shells, with which the two sides share responsibility.