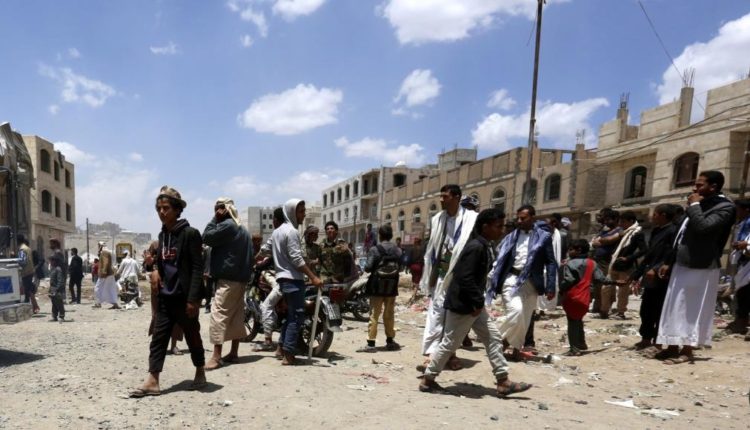 13 Yemeni civilians, most of them girls, were killed and 92 others were injured on Sunday after targeting a residential area in Sanaa by the UAE fighter jets in a new massacre added to the black record of Abu Dhabi in Yemen.

The Yemeni Ministry of Health said in a statement that the UAE fighter jets targeted the residential neighborhood of Sa’wan that follows the Directorate of Al-Sha’ab. That led to the death of 13, most of them are female students, in addition to the destruction and damage in neighboring houses.

The Yemeni Association of War Victims strongly condemned the killing of 13 Yemeni civilians, stressing that the incident was a war crime and a crime against humanity added to the long record of the Saudi-UAE alliance crimes in the four-year war against Yemen.

The Hague-based group said in a statement it had received statements and testimonies of witnesses that a UAE Mirage fighter plane targeted the residential neighborhood of Sa’wan, which led to the deaths, injuries, and damages in neighboring houses.

The incident is a new episode in a long record of horrific massacres that the Saudi-UAE alliance has been involved in since it began its war on Yemen more than four years ago.

In August, the Saudi-UAE alliance warplanes targeted a bus carrying dozens of children near a popular market in the city of Saada, killing 29 children under the age of 15 and injuring 48, including 30 children.

The Saudi-UAE alliance, as well as the Huthis group, have been involved in targeting around 1,600 schools in Yemen as well as dozens of hospitals and governmental and civilian facilities.

The Alliance also targeted a camp for displaced people in the Al-Mazraq district, Haradh district of Hajjah province in 2015, killing at least 45 people.

In addition, the wedding carnage in September 2015, in which warplanes were killed, killed about 130 civilians during a wedding in the Wahja area.

At the funeral of the father of the pro-Houthi Interior Minister Jalal al-Ruwaishan on 8 October 2016, the coalition aircraft launched an air strike that was widely criticized internationally and later known as the funeral airstrike where 115-140 dead and 610 injured.

The Association of War Victims in Yemen called on the international community to exert serious efforts to open a comprehensive and independent investigation into the violations committed by all parties to the conflict in Yemen, especially the Saudi-UAE alliance.

The Assembly referred to the report of the Panel of Experts of the Sanctions Committee on Yemen of the United Nations Security Council, about the direct and indirect human rights violations of the Coalition and all other actors involved in the conflict, some of which may amount to war crimes.

The Human Rights Association stressed that targeting the Saudi-UAE fighter jets of a residential area in Sana’a yesterday evening and the occurrence of such a large number of casualties and injuries is a war crime under the jurisdiction of the international criminal. This requires the United Nations today to move towards these crimes and hold those responsible accountable for the justice of the victims and the protection of civilians in Yemen.