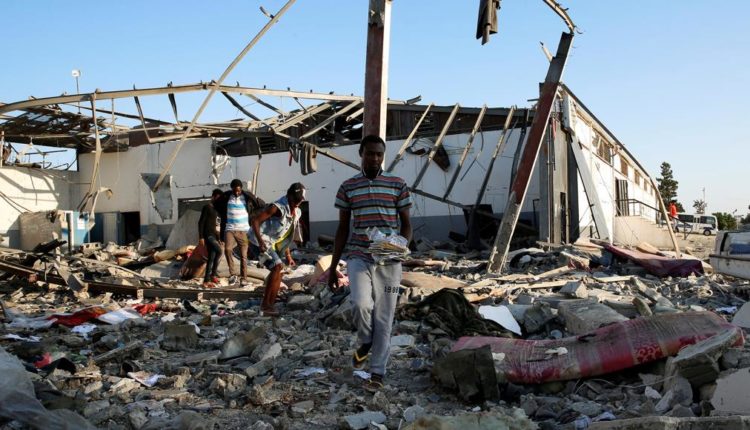 The United Nations has condemned the United Arab Emirates for committing war crimes in its wars and criminal military interventions in a number of countries, BBC said.

BBC said it had overlooked a UN report at the end of a secret investigation that concluded that a foreign country warplane had launched a missile attack on a migrant detention center in Libya.

The report did not address any country by name, but the BBC quoted an informed source as saying the investigation focused on the United Arab Emirates.

The UN High Commissioner for Human Rights, Michelle Bachelet, said the attack could be a war crime.

The attack on a migrant detention center in the suburb of Tajoura east of the Libyan capital Tripoli last July killed 53 migrants and wounded 130 others.

The majority of those killed in Tajoura were believed to be African migrants who were planning to emigrate to Europe from Libya.

The attack was the deadliest since the military campaign launched by retired Libyan brigade Khalifa Haftar against the UN-backed Government of National Accord (GNA) in Tripoli.

A Security Council committee spent months investigating the attack to determine who was responsible. The BBC has overlooked a confidential, documented report presented to the UN Security Council on Wednesday.

The UAE is the only country with which UN investigators have been linked to air bases from which the planes believed to have been used in the attack took off.

Last month, a panel of leading international and regional experts on Yemen condemned the UAE for committing horrific war crimes against Yemenis and demanded its international accountability as the rest of the country’s conflict.

The Panel confirmed that the UAE and other parties to the conflict in Yemen have benefited from the “lack of accountability” for violations of international humanitarian and human rights law.

In its resolution 36/31 of September 2017, the Human Rights Council requested the United Nations High Commissioner for Human Rights to establish a panel of eminent international and regional experts on Yemen to monitor and report on the human rights situation.

The expert group was mandated to undertake a comprehensive study of all alleged violations and abuses of international human rights law and other appropriate and applicable areas of international law committed by all parties to the conflict since September 2014, taking into account the possible gender dimensions of such violations, as well as to uncover the facts and circumstances surrounding the violations. and, where possible, identify those responsible.

On 4 December 2017, the High Commissioner established the Panel of Eminent International and Regional Independent Experts, appointing Mr. Kamal Jendoubi  as Chairman, Mr. Charles Garway (United Kingdom of Great Britain and Northern Ireland) as an expert, and Ms. Melissa Park (Australia) as an expert.